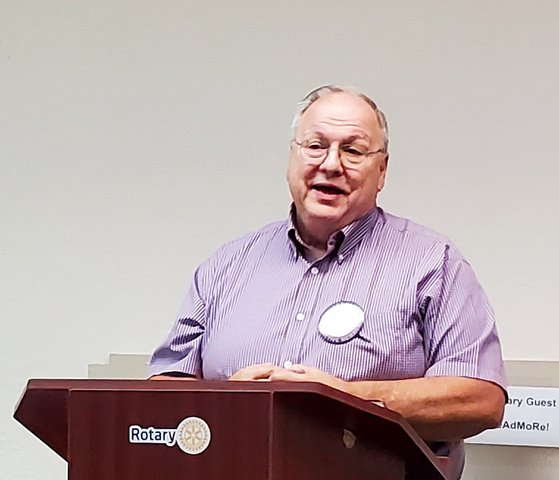 A call to revitalize rural churches

It is not uncommon for churches in the region to engage in ministry overseas, but now ministers are looking closer to home, wondering if small rural congregations can continue. Reverend Dwight Dozier of Great Bend’s Encounter Church recently completed his master’s thesis, titled “Population Decline in Rural America: A Case for Continued Church Planting and Investing in Ministry.” “.

Dozier recently gave a brief program on this research at a meeting of the Great Bend Rotary Club, of which he is a member. Dwight and his wife Dottie have been at Encounter Church (formerly Assembly of God) for 20 years and in the ministry long before that.

â€œOur 44 years of ministry have mostly taken place in more rural settings,â€ Dozier noted. For his thesis, he looked at communities of less than 10,000 inhabitants that are not in the immediate vicinity of an urban core. He asked, â€œIn light of declining populations, does it make sense to plant churches or try to revitalize churches in rural communities, or should we just let them die? Dozier concluded that there are still good reasons to revitalize churches in rural communities.

Losing a community church can be as devastating as losing a grocery store, he noted.

â€œWhen a church closes in a small rural town, there are often no other viable options for residents of that community to find the spiritual food they need,â€ he said. “Every community deserves to have a healthy church, not just a building that takes up space around the corner.”

He said a healthy church is vital for the very survival of rural communities.

â€œThere is a social need that is not being met because not only are churches closed, but cinemas close, bowling alleys close, ice rinks close. There are few opportunities for engagement with the youth and young families who live in these communities. This is one of the reasons why in rural America today, drug use, especially opioid use, is higher than in many urban centers. Teenage alcoholism is far higher in rural communities than in urban centers and has been for a number of years. At the same time, there is often no access to services such as counseling or treatment centers in rural communities.

And while pastors may not be licensed clinical counselors, churches often provide a place for people to receive counseling, he said. â€œMany pastors are very effective in helping people overcome problems in their life, in their marriage, and a healthy church provides an opportunity for this in places where these services are not available,â€ he said. he declares. â€œA healthy church provides spiritual guidance. “

The Dozier Church has an ongoing commitment to approximately 65 missionaries and ministries around the world. But now he sees a need closer to home.

It’s something his local congregation was already doing when he arrived, Dozier said. In 1996, they planted Iglesia de la Cosecha, a Hispanic Assemblies of God church, at Third and Frey Street in Great Bend. In 2007, Great Bend Church sent one of its pastors, Larry Schumacher, to help the Assembly of God Church in Lyon.

â€œThis church was about to close and we sent a team of people with Larry. This church has been revitalized as a healthy congregation today, â€Dozier said. â€œAnd then from 2006 to 2018, we did limited work in Coldwater, Sterling, Greensburg and Kinsley, partnering with those churches to try to invest in their health and strength,â€ he said.

â€œIn 2019, we partnered up with Randy and Lisa Parr and sent a team of 15 people to work with them for the first 90 days, and then we had seven people who moved to Ness City, to help them revive the ‘Assembly of God Church in Ness City, now called the Church of the Generations,’ he continued. â€œIt was a very successful business as we partnered with them both with financial and human resources. “

The year 2020 has seen limited in-person meetings in churches due to the COVID-19 pandemic. Encounter Church was just returning to in-person services when the Assemblies of God district superintendent called Dozier and asked if he would consider taking over the Sterling Assembly of God Church as a satellite.

The superintendent told him that the church was about to close. â€œTheir pastor had kind of abruptly resigned and there were only a handful of people left in the church,â€ he said. “We were absorbed in our own issues, but I accepted that we would send people to fill the pulpit for them and pray about it.”

The result was the Encounter Church Sterling campus, where the Church of Great Bend has a lifelong commitment to help with administration and guidance.

What can be done to revitalize rural churches? Dozier found root causes of the decline that went beyond population loss. While this is a challenge for all faiths, for Dozier’s research he turned to the historical records of the Assemblies of God in Kansas and focused on two dozen rural churches that closed between 1970 and 2020.

For the most part, churches have closed due to leadership issues, he said. The main problems were internal dysfunction or internal struggles and general loss of vision.

â€œOften we put more emphasis on our traditions and preferences,â€ he said. â€œI think sometimes in church we settle into our own little circle and overlook the opportunities that are there.

â€œWe have to be efficient to reach that market share, so we have to find new ways of doing things. “

Dozier emphatically emphasizes: â€œThe Gospel message to which God has entrusted us is sacred. But that’s the only thing that’s sacred.

However, he said: “If singing anything other than 16th century hymns will attract a younger audience while maintaining the integrity of the gospel message, or if sitting in comfortable chairs instead of old, rigid benches?” will somehow be of greater appeal, if having some light accents on stage, etc., – anyway, as long as the message remains intact, it’s the transmission of the message that counts. We must transmit it effectively to reach the culture in which we are. God has entrusted this culture to us.

The last reason Dozier found to explain the decline in membership in rural churches is the lack of pastoral leadership. The most effective pastors are committed to their congregations and have a vision of evangelism and connect with the next generation, he said.

Ray Anderson, who wrote the book The Form of Practical Theology, said: â€œRevitalization occurs whenâ€¦ the mission of God emanates from the church in the community. “

Community ties: Church building on long-vacant land aims to give back to the neighborhood | Life