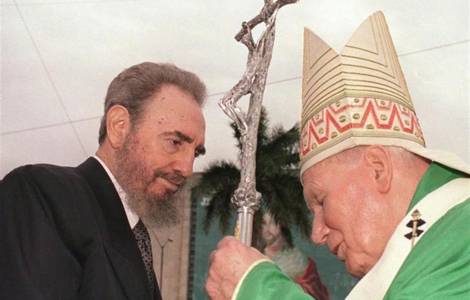 AMERICA/CUBA – Visit of the Pope 25 years ago: “Commemoration must renew the life and mission of the people of God”

AMERICA/CUBA – Visit of the Pope 25 years ago: “Commemoration must renew the life and mission of the people of God”

Havana (Agenzia Fides) – The commemoration of the 25th anniversary of the visit of Pope John Paul II to Cuba (21-25 January 1998) is a good occasion to give thanks to God and “to the life and mission of the people of God within the framework of the synodal journey which has already begun in all the dioceses”. The Cuban Episcopal Conference has already begun some time ago to organize the program of celebrations. Details are currently being worked out so they can be announced in the coming days. The Cuban Episcopal Conference also addressed the subject during its 160th General Assembly from November 7 to 11, which was also attended by the Apostolic Nuncio, Bishop Giampiero Gloder.
The Standing Committee of the Episcopal Conference reported on the ad limina visit to the Vatican last October, where the bishops met with the Pope and various
Heads of Dicasteries. The report particularly highlighted the climate of fraternal dialogue and mutual listening on all the issues discussed. The special bond between Pope Francis and the people and the Church of Cuba was also highlighted. The President and Secretary General of the Standing Committee also reported on a visit to Germany and meetings with representatives of organizations that support the pastoral work of the Cuban Church.
Another issue discussed by the bishops was the theme and priorities of the planned pastoral program: The parable of the Good Samaritan is intended to provide spiritual motivation to implement the orientations formulated by the Cuban Church during the diocesan phase of the process. synodal. In this context, the members of the national reference team for the synodal process were able to inform the bishops about the work of the diocesan pastoral coordinators and the diocesan synodal teams, who met in Havana last September.
In addition to the election of the presidents of the episcopal commissions, the bishops also discussed guidelines for the prevention of abuse of minors and vulnerable adults, work in the field of family pastoral care, the formation plan for the Seminary of San Carlos and San Ambrosio in Havana, the document for the continental phase of the synodal process, the Week of Prayer for Christian Unity and World Youth Day in August 2023 in Lisbon, to which a representation of young people will also go Cuban Catholics.
The Bishop of Pinar del Rio, Msgr. Juan de Dios Hernández, took the opportunity to share the experiences he had in his diocese during Hurricane Ian and all that was done with the support of faithful from different parts of the country, from different organizations Caritas, local authorities and the help received from abroad, to alleviate the innumerable difficulties that have arisen. (SL) (Agenzia Fides, 17/11/2022)