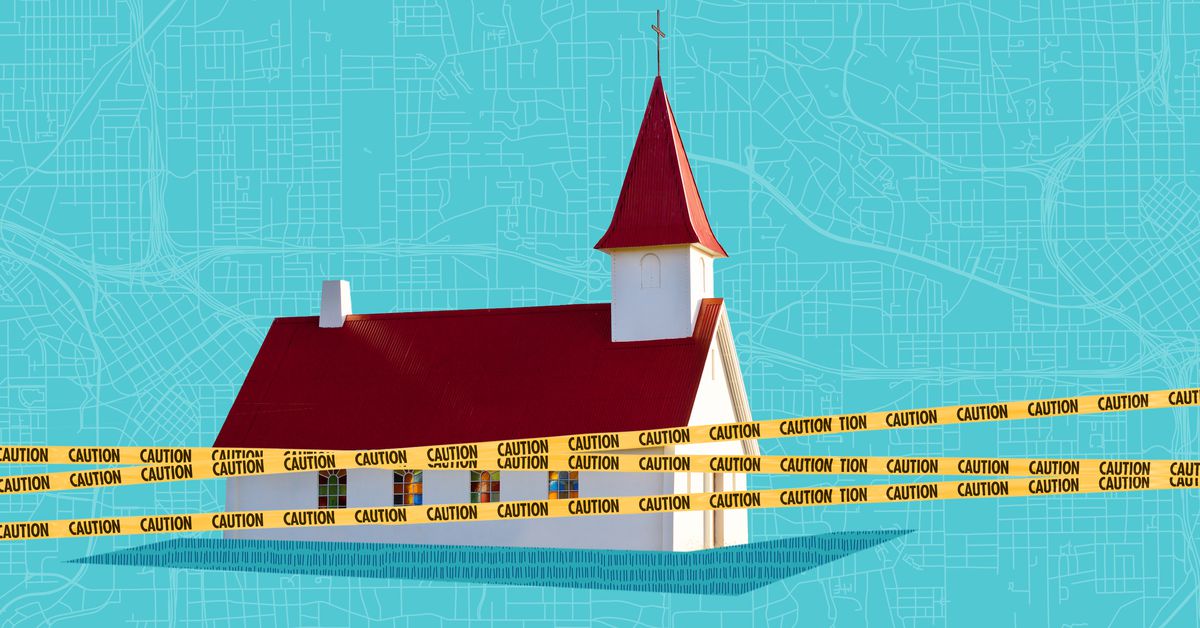 Attacks on Churches: How Faith Groups Respond to Vandalism and Hate Crimes

AndrÃ© Sicard was studying when he saw the images for the first time. The beloved statue of Saint Therese from her church was off its pedestal and lay beheaded on the ground.

Memories of childhood cults crossed his mind. At Christmas, at Easter, at his first communion, this statue had watched over him with his white marble eyes.

â€œHe had always been there. This is what you saw as you walked in and out. Seeing it brokenâ€¦ my stomach fell, â€said Sicard, who is in Washington, DC studying to be a priest but still calls the St. Therese of the Child Jesus Catholic Church in Midvale, Utah, her home parish.

Sicard and other members of the religious community are still not sure exactly who knocked down the statue in September of last year. The attack came amid a protracted struggle with a group of people trying to sleep on the church grounds.

What they do know is that the vandalism they suffered is far from unique. Since May 2020, there have been at least 100 such attacks against American Catholic congregations.

â€œThese incidents of vandalism range from the tragic to the obscene, from the transparent to the inexplicable. There is still a lot that we don’t know about this phenomenon, but at a minimum, they point out that our society is in dire need of God’s grace, â€reads an October 14 statement from the State Conference of Catholic Bishops. -United.

The Church of Jesus Christ of Latter-day Saints has seen a similar increase in violence over the past two years, primarily in the United States and Canada, according to Kelly Smoot, media relations manager for the church. .

She noted that Latter-day Saints, like other people of faith, have a strong connection to their churches.

â€œPlaces of worship are important to communities around the world as places of public and private gathering, learning, recreation and worship,â€ said Smoot.

Data recently released by the FBI shows that hate crimes, in general, have become more prevalent over the past two years.

In fiscal year 2020, which ran from October 2019 to September 2020, law enforcement agencies across the country reported 8,263 criminal incidents and 11,129 related biases motivated by bias. The total number of hate crimes during the reference period was higher than it has been in the past two decades.

Of the 8,052 “single-bias incidents” tracked by the FBI, 13.3% were motivated by religious beliefs. In addition, just over 3% of recorded hate crimes took place in places of worship.

Brian Levin, who heads the Center for the Study of Hate and Extremism at California State University, San Bernardino, appeared on the “Axios Today” podcast on October 26 to discuss these trends. The increase in vandalism, arson and other types of attacks on churches likely stems from a growing distrust of civic institutions, he said.

â€œThe communal institutions that have traditionally united us, such as academia, arms of government, the media, the medical establishment and now religious institutions, are held in low esteem compared to previous decades,â€ Levin said.

In response to the rise in violence, religious leaders are calling on the government to do more to ensure the safety of places of worship. On October 27, the Union of Orthodox Jewish Congregations of America sent a letter to national policymakers asking them to expand the federal nonprofit security grant program.

“The NSGP is currently funded at $ 180 million, which left more than half of grant applicants empty-handed in fiscal year 2021,” the organization noted in a statement accompanying the letter.

In addition to considering increasing funding for this program, the Senate is currently considering a bill that would help places of worship establish better security procedures. The Pray Safe Act, sponsored by Sen. Rob Portman, R-Ohio, would create a federal clearinghouse for safety-related information.

â€œThe senseless threats and attacks on faith-based organizations and places of worship that we see across our country, in my opinion, are attacks on all of our values,â€ Portman said in July.

In the absence of more support from the government, churches rely on their communities for help after an incident of vandalism or other type of attack.

Sicard said he was blown away by the number of people who offered to help repair his parish statue or pay for a new one in the weeks following the disturbing event.

â€œIn the midst of a nightmare, the people who came to help us turned the situation into a blessing for the parish,â€ he said.

The Sainte-ThÃ©rÃ¨se de l’Enfant-JÃ©sus Catholic Church used the donated funds to purchase a new statue and guard against future attacks. There is now more lighting on the parish grounds, as well as more security cameras and fences.

In August, many of the people who made these adjustments possible visited the church for a dedication ceremony. The event was an opportunity to reflect on what the parish had gone through and to turn a new leaf, said Sicard.

â€œIt was uplifting to see so many people come out and see how beautiful everything was,â€ he said.

While the gathering focused on the church’s new statue of Saint Theresa, which sits on a pedestal outside surrounded by flowers, the old one also played a role. Participants were invited to see the broken pieces and remember the attack.

â€œWe keep (the old statue) as a reminder of how far we’ve come,â€ Sicard said. “Maybe one day we can fix it or find someone who can.”

Register to receive the newsletter


State of Faith with Kelsey Dallas

Receive weekly stories to help you deepen your understanding of religion in the public arena.