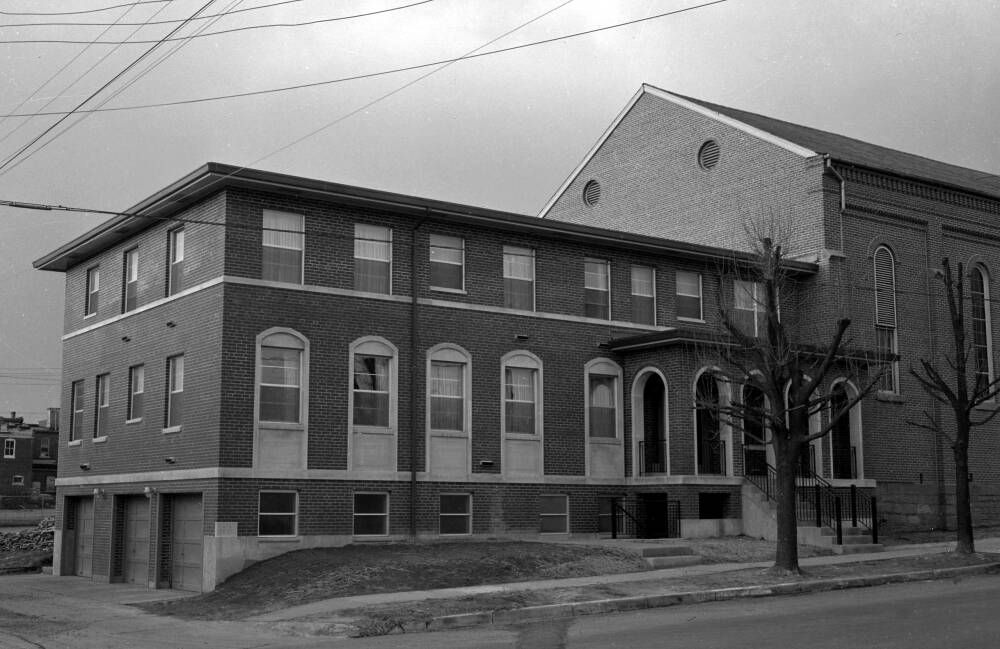 
The brick presbytery was built as an addition to the east end of St. Mary’s Cathedral in 1957. A recent fire damaged the priests’ house, when a homeless man, seeking warmth in sub-zero temperatures freezing point, accidentally set fire to a basement entrance under the porch. (GD Fronabarger ~ Southeast Missouri Archives)

The acrid stench of burnt wood was heavy in the air as I entered St. Mary’s Cathedral on Wednesday evening for choir practice. A few days earlier, a fire had damaged the presbytery attached to the back of the church.

Fortunately, the Cadillac of fire alarms installed during the cathedral’s last renovation saved the lives of the resident priests and averted more serious damage to the structure. The house of priests was built in 1957.

That same year saw the only other serious fire to threaten the 154-year-old brick church. In March of that year, a child sounded the alarm.

BLAZE IN ST. MARY’S CURBED AFTER ALERT THE BOY SOUNDS THE WARNING

A serious fire at St. Mary’s Cathedral was narrowly avoided in the early afternoon of Saturday when a youngster selling sweets nearby saw smoke billowing from the building and sounded an alarm.

Michael Hill, 11, son of Mrs. Mana Hill, 1532 Wayne St., a sixth grade student at Junior High Street, crossed the street to the Clark Buick Co. and alerted the employees there, who sounded the alarm and rushed to the church to try to put out the flames.

The firefighter discovered that the curtains of a confessional were on fire. Fire Chief Carl Lewis said the blaze damaged the confessional, used by the Reverend Robert Schumacher, administrator of Cape Catholic High School.

An acoustic-type wall panel was used in the confessional, he said, and it was smoldering and needed to be removed. The rubber mats used on the benches also caught fire and the asphalt tiles on the floor were burned.

He said he was certain examination of the walls and windows would reveal smoke damage. The tops of several pews near the confessional were also blistered by the heat of the fire.

The confessional was located immediately south of the Sprigg Street entrance to the cathedral at the rear of the sanctuary.

Monsignor Marion F. Forst, pastor of the cathedral and vicar general of the Diocese of Springfield-Cape Girardeau, said the damage was covered by insurance.

He said experts were due here today and until they assess the damage the extent is not known. He said that if the smoke damage was excessive, the interior of the building might need to be redecorated, which would be quite expensive.

Obviously, no one was in the church at the time of the fire. Chief Lewis said when the Hill child saw the smoke coming out of the building, he first ran inside to determine the cause and then drove to the car agency.

Firefighters stretched 75 feet of one-inch hose to the cathedral and spent 55 minutes at the scene.

The church was opened following the fire and ventilated as much as possible. Regular masses were celebrated on Sundays. A Mass in honor of the Feast of the Annunciation (Feast of the Cathedral. – Sharon) is scheduled for late afternoon in the Cathedral by Bishop Charles H. Helmsing, Bishop of the Diocese of Springfield-Cape Girardeau.

This was the second church fire in Cape Girardeau in less than two weeks. On March 11, a fire that broke out near the Maple Avenue Methodist Church furnace caused extensive damage to the structure.