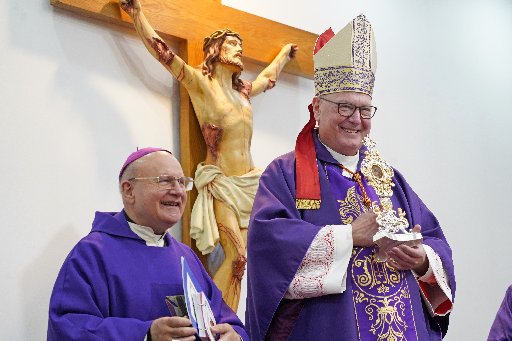 Cardinal Dolan receives a relic on behalf of the USCCB, evangelism committee

Dolan received the relic April 7 on behalf of the United States Conference of Catholic Bishops and the USCCB Committee for Evangelism and Catechesis, which spearheads Eucharistic renewal.

The presentation of the relic followed adoration of the Blessed Sacrament and an evening Mass at St. Rita de Cascia Church in the Bronx, according to an April 8 press release from the USCCB.

Blessed Acutis, an Italian teenager who died of leukemia in 2006 and was beatified in 2020, is buried in the Santa Maria Maggiore church in Assisi. The 15-year-old’s use of technology to spread devotion to the Eucharist prompted Pope Francis to hail him as a role model for young people today.

He is the patron of the first year of Eucharistic Renewal, which the U.S. bishops approved at their fall general session in November in Baltimore.

His relic, entrusted to the American church for a year, is a fragment of the pericardium, the membrane that surrounded and protected his heart.

“Blessed Carlo Acutis intercedes for us and shows us the way through his living relationship with Jesus in the Eucharist,” said a letter read to the congregation before Sorrentino presented the reliquary to Dolan.

“Blessed Carlo tells us: ‘The more we receive the Eucharist, the more we will become like Jesus, so that on this earth we will have a taste of heaven.’ Such a promise can only fill all who worship the relic with hope and joy,” he said.

Msgr. Anthony J. Figueiredo, who accompanied Archbishop Sorrentino on the visitation of the relics, read the letter. The priest is director of international relations of the Diocese of Assisi-Nocera Umbra-Gualdo Tadino.

Dolan, who will serve as custodian of the relic, was the principal celebrant of the Mass with Archbishop Sorrentino and Auxiliary Bishop Joseph A. Espaillat of New York as concelebrants.

“Celebration, adoration and transformation. This is what the Eucharist is,” Sorrentino told the congregation of Saint Rita.

The mass and presentation of the relic took place on the fourth day of the Archbishop’s five-day U.S. tour with the relic.

He began his journey April 4 in the Diocese of Rockville Center, New York, with a visit to St. Anthony High School in South Huntington, where the relic was on display.

Other stops included the Diocese of Brooklyn, New York, where he led a diocesan holy hour for youth and young adults at Our Lady of Mount Carmel Church in Astoria and a high school rally at Holy Church. Family in Flushing, still with an exhibit of the relic.

The Relics Tour was organized in response to a request from the USCCB for American Catholics to have the opportunity to venerate a relic of Blessed Carlo Acutis, “the inspiring millennial witness to the Eucharist as our” highway to heaven. “”, as the letter said. at mass in the church of Saint Rita in Cascia put it on.

The visit to the relics also coincided with a New York exhibit, “Museum of Memory, Assisi 1943-1944,” which recognizes the vital actions taken by the clergy and citizens of Assisi to protect Jewish refugees during the Holocaust. . Marina Rosati, founder and curator of the Museum of Memory, also accompanied Archbishop Sorrentino on the journey of the relics.

On April 6, Sorrentino spoke at a panel discussion on the church’s efforts to protect Jewish refugees in Assisi during the Holocaust.

The penultimate stop on the tour of Sorrentino’s relics took place mid-afternoon April 8 at St. Francis of Assisi Church in Manhattan, where Archbishop Sorrentino celebrated Mass. He was welcomed into the church by Franciscan Thomas Gallagher, the pastor.

The Archbishop’s last stop before leaving the United States in the evening was the Statue of Liberty.

In a statement released ahead of his visit to the New York metropolitan area, Sorrentino said, “It is a joy for me to carry this relic from Assisi, where Blessed Carlo said he felt ‘happiest. of all “.”

The teenager’s body rests in the Sanctuary of Renunciation in the church of Assisi, “the very place where St. Francis, 800 years earlier, stripped himself of everything to follow Jesus”, said the archbishop.

“My prayer is that the presence of the relic of Blessed Carlo will arouse in our American brothers and sisters, especially the young, a desire not to waste life, but rather to make it a masterpiece, such as chosen by Blessed Carlo in our time and by Saint Francis before him,” he added.

Blessed Acutis centered his life on the Eucharist to grow in his relationship with Jesus. “The more we receive the Eucharist”, he said, “the more we will become like Jesus”. He endeavored to attend daily Mass and spend time in Eucharistic adoration, believing that “when we stand before Jesus in the Eucharist, we become saints”.