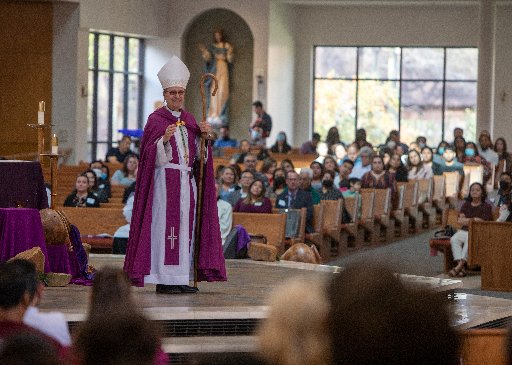 PEARLAND, Texas — An important part of Lent welcomes those who are in the final stages of their preparation to join or enter into full communion with the Catholic Church at Easter.

Catechumens, or the unbaptized, will receive the sacraments of church initiation – baptism, confirmation and first communion at Easter.

Candidates are those who are already baptized and will be received into full communion with the Church after completing their initiation with a profession of faith, followed by the reception of the sacraments of confirmation and the Eucharist.

For catechumens, Cardinal Daniel N. DiNardo of Galveston-Houston of Galveston-Houston and Auxiliary Bishop Italo Dell’Oro celebrated the rite of election in bilingual ceremonies in four different parishes around the Archdiocese: the St. Ignatius of Loyola Church in Spring, Christ the Redeemer Catholic Church in Northwest Houston, St. Helen’s Catholic Church in Pearland, and Sacred Heart Co-Cathedral in Houston.

People from parishes across the archdiocese, from Galveston to Spring, attended, including a number from the University of St. Thomas in Houston.

“From all corners of the Archdiocese, we come together. It’s good that you’re here,” DiNardo said, enthusiastically greeting the St. Helena congregation. “It is the election by God of catechumens and candidates, those who have prayed and studied the faith. Today, the Church chooses them, as Christ has chosen you, to advance towards the sacraments of Easter.

During the rite of election, the catechumens are presented with their godfathers and godmothers to the bishops and to the community of faith.

After catechumens have publicly affirmed their intention to enter the Church, the bishops, in the name of the Church, accept or “elect” them as ready to partake of the sacraments of initiation.

The ceremony was repeated in large and small dioceses on the first Sunday of Lent.

During Easter Vigil Masses on April 16, at least 1,652 people from parishes in the Archdiocese of Galveston-Houston are expected to become Catholics. It is estimated that 245 are young candidates or catechumens.

“The rite of election is an important moment in the journey of catechumens to celebrate the sacraments at Easter time. Here they will stand and publicly express their desire to join the church through baptism, confirmation and the Eucharist,” said Chris Labadie, director of the office of worship for the Archdiocese of Galveston-Houston.

“Equally important is when the church, through the bishop, formally recognizes the conversion and preparation that has already taken place by naming them chosen by God,” he said. told the Texas Catholic Herald, the archdiocesan newspaper.

After the rite of election, the catechumens, henceforth called “the elect”, begin a period of purification and illumination, which is the final and intense preparation for the reception of the sacraments of initiation during the Easter Vigil.

A unique moment occurs during the rite of election: the representatives of each parish announce the names of those who intend to join the church to the bishop, who then consults these names in the book of the elect. After the rite, the bishop signs the book as a testimony of their faith.

For candidates, the call to continued conversion marks their final preparation to be received into the church.

In Spring, Texas, at St. Ignatius of Loyola, Dell’Oro beamed bench after bench, each filled with catechumens or candidates, alongside their sponsor or godfather, with family and loved ones nearby.

A husband and wife from St. Michael the Archangel Catholic Church are traveling together as candidates. The young couple, Mary-Margaret and Corey Howell, are also expecting their first child in March.

“We come from a long line of Irish Catholics, but I was baptized in a Presbyterian church near my childhood home and my wife was a Baptist. But now that we are expecting our own child, we wanted to find a home in the Church,” Howell said.

So they began the months-long journey of attending classes for what is now called the Order of Adult Christian Initiation, or OCIA, which has several stages marked by study, prayer, and ritual. of the mass.

(For the past two generations, it was known as the Rite of Christian Initiation for Adults, or RCIA, but last November at their fall general assembly, the U.S. bishops voted to change the name. )

“We fell in love with the teachings of the Catholic Church,” Howell told the Texas Catholic Herald, the archdiocesan newspaper of Galveston-Houston.

Lauren Gallegos of St. Pius V Catholic Church also decided to become officially Catholic because she remembered that her grandmother was Catholic. Although she was not baptized, Gallegos helped her younger sister attend Catholic school, which rekindled her interest. Now the 30-year-old is ready after attending two years of OCIA.

“I am so excited to be able to receive the body and blood of Christ in the Eucharist. It is so sacred and moving,” she said.

The director of religious education in English at St. Pius V, Gina Pasket, said she has seen a difference now that her classes have started to meet again in person rather than via Zoom as the pandemic recedes.

“Catechumens and candidates seem more engaged in person, much more comfortable sharing with each other, and open to exploring the Catholic faith more deeply,” Pasket said.

DiNardo expressed his appreciation for the intentional, often very intense and personal work of catechists and elected officials.

“Thank you for being on your path and coming to the Lord,” he said. “Welcome to this important part of being a church member. You are almost there. We are praying for you for the next 40 days.

Zuñiga writes for the Texas Catholic Herald, the newspaper of the Archdiocese of Galveston-Houston, and Ramos is the newspaper’s editor and designer.