THE recently renovated shrine of the Church of the Nativity of the Blessed Virgin Mary (NBVM) in Penang offers comfort and tranquility to those who set foot there.

The 52-year-old building at Jalan New Ferry, Butterworth, is now fully air conditioned to bring much relief to parishioners who were sweating during mass.

â€œTwo large white panels that double as projection screens stand out for their golden finishes.

â€œThe main altar bearing the tabernacle, the altar table, the celebrant’s chair, and the pulpit also have similar color combinations.

â€œWe have kept the large wooden crucifix as a centerpiece against the original plastered wall which is now painted blue and gilded with gold leaf,â€ he said in an interview with the church.

He said the original marble floor as well as the nave filled with pews had also been preserved, while “kampung-style” glass panels replaced the old colored glass panels on both sides of the altar.

Old wooden window frames were replaced with aluminum frames that would last longer, while warm LED downlights were used to give the sanctuary an elegant vibe, he added. 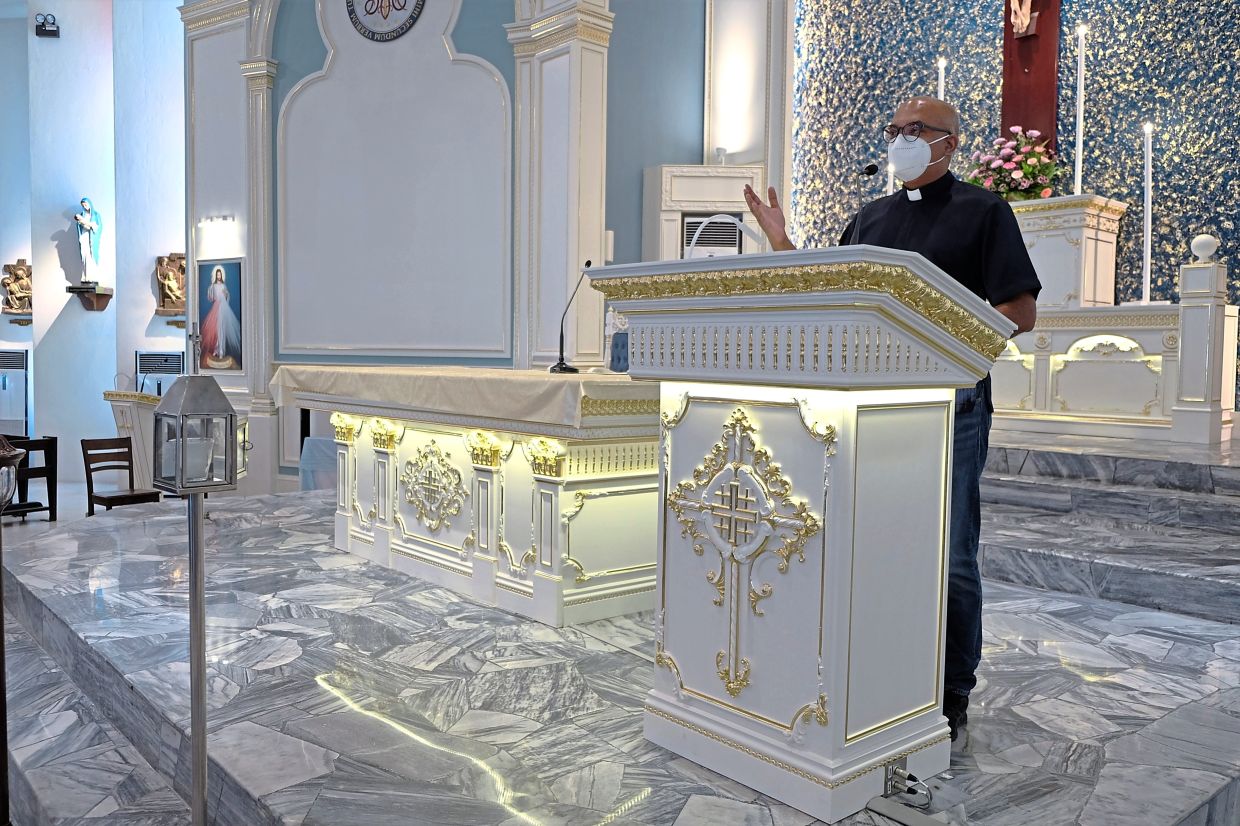 Father Dominic preaching from the pulpit with gold finish at the altar which has the original marble floor.

â€œThe funds for the renovation of the church, which cost 670,000 RM, were raised through several fundraising initiatives and donations.

â€œThis is one of the six phases of the NBVM redevelopment plan that I have supervised since I was appointed parish priest here in December 2018,â€ he said.

Father Dominic said that another major achievement was the completion of the multifunctional nursery, which is awaiting its certificate of completion and compliance from the authorities.

â€œIn addition to a cafÃ©, kitchens, toilets and a small auditorium, the center also has a room that can accommodate up to 800 people. â€œBoth projects were delayed due to the movement control order.

â€œThey were to be completed in time for the 85th anniversary of the NBVM in September of last year, but instead we have them prepared for the 86th anniversary this month,â€ he said.

The shrine was blessed and rededicated by the Catholic Bishop of Penang Datuk Seri Sebastian Francis on the feast of the Nativity of the Blessed Virgin Mary on September 8.

As per standard operating procedures, only 50 people attended the event, while the rest of the parishioners followed the ceremony online via the live broadcast.

â€œI am grateful that despite the challenges, we have contributed to the economy by creating jobs for entrepreneurs and salespeople.

â€œIt is a dream come true for the parishioners who have been preparing it for 15 years. â€œWith rapid growth in neighboring areas coupled with many housing projects around, we hope to serve as a community center accessible to everyone, regardless of race or religion.

â€œThe remaining phases to be carried out later include the upgrading of the drainage system, landscaping and construction of parking lots on the site of the former parish office.

â€œThe first non-functional wooden church structure built in 1935 that is still standing will have its roof altered during one of the phases.

“We plan to keep the front facade for ‘heritage’ purposes and replace the rear part with concrete and glass structures to turn it into a prayer hall and a museum,” he said.

Father Dominic said he had started a mini vegetable and chicken farm within the church grounds, where the harvest of the crops was distributed to deserving parishioners.

The NBVM and its sister church Saints Chastan and Imbert Church in Chai Leng Park, Prai, which is celebrating its 26th anniversary this year, has a total of more than 2,000 parishioners from 500 families.