Jamestown was the first successful English colony in the modern United States and set the confrontational tone for the future: a place that mixed idealism over democracy and freedom with slavery and conflict with Indians.

English settlers had tried and failed to settle here before, most infamously in Roanoke, but in April 1607 they finally gained a foothold which overcame famine and drought in its first few months to become permanent.

It was named after King James I, the English King, and the first settlers came aboard three ships on a four-month voyage that began in 1606.

They were greeted by the Indians with dancing and tobacco, but by the end of 1607 up to two-thirds of the English had died thanks to attacks from Indians who had turned hostile and the settlers arrived too late to plant crops. – and anyway, too many were gentlemen who lacked practical skills.

Past of Virginia: a painting suggesting how Jamestown was in the early 1600s, when it was the first successful English settlement

The local Indians were ruled by Powhatan, and his daughter Pocahontas would become a key part of the story, when Smith was captured in late 1607 by one of her father’s parents.

Smith was later to tell Queen Anne that she had intervened to prevent her brains from being beaten and that she “risked having her brains beaten to save mine”, ensuring her safe release and return. in Jamestown.

In 1608 England sent supplies, gold and most importantly skilled laborers and slowly the colony began to prosper.

But then came the “Famine Time” of 1609 and 1610 – with scientific evidence now showing evidence of cannibalism among the settlers.

Also in 1609, settlers captured Pocahontas and detained her for a year; she learned English and converted to Christianity.

By June 1610 there were only 60 survivors and the ships were ready to take them to safety in Bermuda when another fleet arrived with supplies and men.

Among them was John Rolfe, who brought with him Trinidadian tobacco seeds which he began to cultivate upstream from Jamestown.

He became prosperous and wealthy and in 1614 married Pocahontas, the first recorded marriage between settlers and Indians, and they had a son the following year.

Eight years known as the Peace of Pocahontas followed – but not for the couple, who traveled to England in 1616; when they planned to return in March 1617, they reached Gravesend, Kent, just outside London, where Pocahontas died. John and their son returned to Virginia and prospered; they still have descendants in the United States.

By 1619 the colony was thriving and the ideals of democracy and religious freedom were proclaimed, which led to the founding of the General Assembly in July 1619.

The assembly was formed after the colonies introduced private property rights – which included the right to own slaves – and established that English common law was the law of the land. 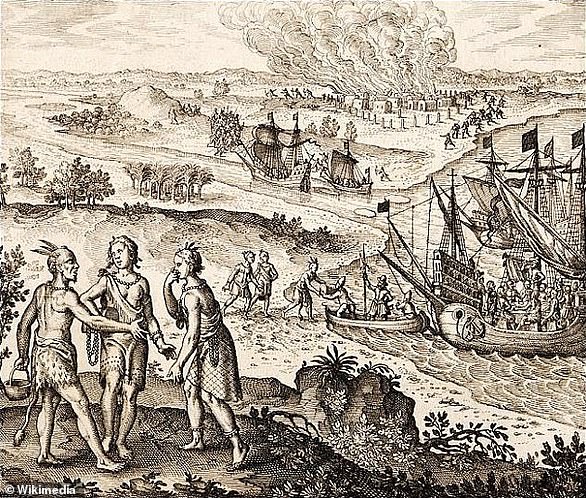 Contested story: a woodcut showing the kidnapping of Pocahontas, the Indian princess who married John Smith in Jamestown before being taken to England and dying

The assembly, in the bourgeois house, was’to establish an equal and uniform government throughout Virginia ‘and provide’just laws to guide and govern happily the people who dwell there, â€but only free men of English descent had the right to vote.

The settlers then included Poles – who went to court and also launched the continent’s first strike for equal voting rights – and English indentured servants, who could not vote.

But a new group of people have also arrived – and not by choice.

In the Caribbean, English pirates seized captive Africans taken into slavery in the Spanish colonies and brought about 20 of them to Jamestown – where they suffered the same fate of slavery.

In 1622, the Indians led by Powhatan decided to try to eliminate the colony, thus ending the peace, and although Jamestown survived, its outposts did not survive.

Then in 1624, it became a direct royal possession, and continued to grow, today the official capital of the colony of Virginia.

She survived the Indian wars and in 1644 imposed a peace treaty on the conquered Indians which placed them in a reserve, the first on the continent.

In 1676, Virginia was very successful – but torn by class strife, leading to Bacon’s rebellion, as poorer western frontier men, indentured white servants, and African slaves rose up under the leadership. of colonist Nathaniel Bacon against the aristocratic masters, burning Jamestown to the ground.

They also tried to expel all Native Americans from Virginia; this rebellion faltered with Bacon’s death, but slavery became more clearly racial thereafter.

Jamestown’s end as the capital came when the state house accidentally burned down in 1698, causing a temporary move to WIlliamsburg, which became permanent the following year.

By the mid-1700s it was largely deserted, and although the 200th and 250th anniversaries of its founding had been marked, most of it was in ruins.

The land was widely cultivated until 1893, when its new owners donated 22 acres, including the then ruined church steeple, to the Association for the Preservation of Antiquities of Virginia.

This set the area on a path which means that today more than 1,500 acres form a national park with a live history museum and preserved remains of the settlement.