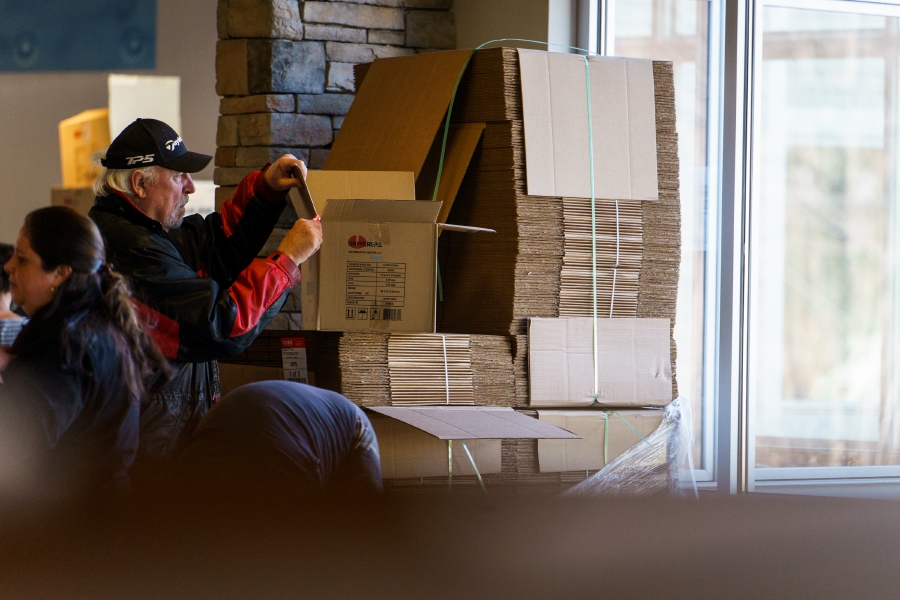 On April 2, nearly 150 people gathered at Cornerstone Church to collect relief kits for women seeking refuge from the Russian invasion of Ukraine.

The church, located at 1146 Waterbury Road, has raised more than $40,000 in donations for kits that will contain hygiene products, underwear and other essentials. Working with Convoy of Hope, a faith-based non-profit organization, the church was able to organize 6,000 kits.

Senior Pastor Eric Bucci, angered by the conflict, said he believed in “prayer and action”.

“As soon as I heard what was happening, I couldn’t sleep at night,” he said.

“I was waking up praying because I know people there and it’s very disturbing. I wanted to see what we could do. »

An estimated 5 million Ukrainians have fled to neighboring countries, such as Poland, since the start of the invasion. A majority are women and children, creating an urgent need for feminine products.

Agnieszka Schlosser, born and raised in Poland, was one of the volunteers assembling the kits. She believes that the Polish people are doing their best to accommodate the influx of refugees.

“People are helping, they are opening their homes to people they don’t know,” she said. “They bring clothes, they bring food, cooking, but you know, there’s not much. Anything we can provide helps a lot.

Schlosser, a resident of Southington, tries to see the good despite the war and the refugee crisis.

“My heart is so happy right now to see that there are so many people willing to spend their time and help out,” Schlosser said. “At a time when everything is so sad and there’s so much bad, you know, there’s still so much good.”

Stacked boxes and rows of volunteers, like Schlosser, filled the church, completing 2,000 kits in the first hour and a half. More than two dozen volunteers did prep work Friday for Saturday’s kit assembly.

“It’s a blessing that so many people have been involved in this, and everyone’s smiling and having a great time, even if it’s a bit chaotic there,” said Janine Mahan, an administrator at the church. Mahan, who helped coordinate the event, says the kits contain a month’s worth of supplies.

“I think it’s fantastic that we can engage the community and impact 6,000 women,” Mahan said. “It’s a small drop in a big bucket, but it will have an impact on these women.”

“Not only are we giving people supplies, which we are doing, but we are also giving them hope,” Bucci added.

The kits, wrapped and stacked on pallets left the Cornerstone parking lot on Sunday for a nearby port. According to Bucci, it will take almost seven weeks for the relief kits to be in the hands of those who need them.

Bucci hinted that Cornerstone may send a team to Ukraine in the future to help. In the meantime, he hopes to see the community supporting the relief efforts.

“We just want to make a difference and hopefully this will encourage others to get involved and do what they can,” Bucci said.

Daniel Passapera is a journalism student at Quinnipiac University and a photographer for the university’s marketing and communications department. Instagram: Danpass19