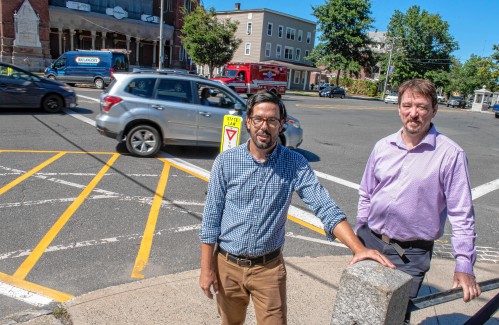 Easthampton in the early stages of a $13.9 million plan for the whole of Main Street

EASTHAMPTON — The city is about to embark on the first stages of an estimated $13.9 million infrastructure project to redesign one of its main thoroughfares.

Beginning next week, land surveyors will establish existing conditions on Main Street/Route 10 from the Manhan River Bridge to the intersection of Main and Park Streets, according to City Engineer Daniel Murphy. The scope of the project also includes the roundabout and part of Pleasant Street.

“It’s a big deal, but it’s still early days,” said city planner Jeff Bagg. “We wanted to inform people that the project is starting and that the investigators will be on site next week. It really is an important time to start the next big infrastructure project.

The goal of the project, which is still three or four years away from launch, is to create a main street with improved security, transit, walking, cycling infrastructure, street trees, green infrastructure and to use designs that make the city center safer, more functional and more aesthetic.

“Easthampton’s continued efforts to have projects back on hold are paying off,” Mayor Nicole LaChapelle said in a statement. “Our Main Street project reduces physical barriers at every level, from safety to the environment.”

The Campus Lane crosswalk is a key location where pedestrian safety improvements are needed, Murphy said. The crossing is 90 feet across four lanes of traffic, he said.

“It’s a place where traffic calming can be used to slow traffic and make the crossing much safer,” he said. “In addition, the Main Street right-of-way is wider than Union and Cottage, which means there is more space to make safety upgrades, better accommodate bicycles and pedestrians, as required state Department of Transportation requirements, and also increase green space.”

The project will be led by a Pennsylvania-based transportation and engineering company, McMahon Associates Inc.

The project builds on the City’s 2017 Comprehensive Street Prioritization Plan as well as the 2020 Downtown Strategic Plan and will complement improvements to Cottage Street, Main Street, Ferry Street, ongoing work on Union Street, planned improvements to Holyoke Street, Payson Avenue and Park Street, which includes bicycle and pedestrian improvements to connect the rail trail to the new Mountain View School.

“This project, however, is certainly a much larger undertaking than Union Street,” said Murphy, who noted that the estimated price for Union Street was over $5 million.

Assessments and mapping of underground utilities will take place in the fall.

As one of the oldest sections of Easthampton, much of the underground sewer and water pipes have never been replaced and are likely over 100 years old, he added.

“Now is a great time to get a better look at this aging infrastructure,” Murphy said. “The city would be required to pay for any replacement of this underground infrastructure.”

Bagg also noted that the project is of particular significance given the future growth of Old City Hall.

Murphy said the process required by the transportation improvement program is lengthy and requires steps that include a 25% public design hearing, which won’t take place until spring or summer 2024.

“We will be looking for community thoughts and feedback on how best to use public spaces. Easthampton residents will have multiple opportunities to share their thoughts as the project progresses,” he said.

According to the current project schedule, construction is not expected to take place before 2026.

Emily Thurlow can be contacted at [email protected]