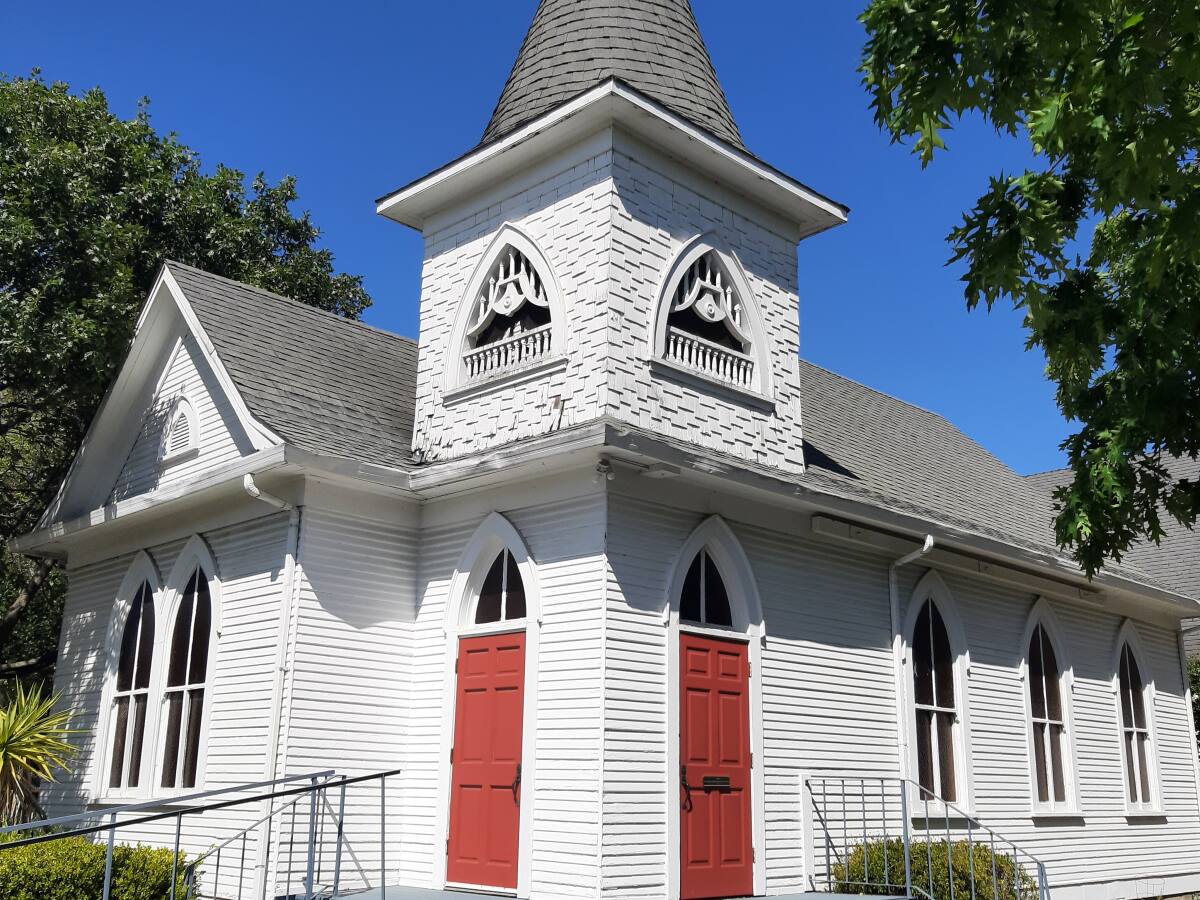 Ever wondered about that cool church building on the corner of West Sierra and Page in Cotati?

Patrick McCarty, minister of Oaks Church in Cotati, exudes a positive outlook on life. The former president of the Cotati Chamber of Commerce said of himself: “I start every day thinking that I’m the luckiest guy in the world because I love my job.”

The beautiful “Heritage Landmark” church, built in 1907, recalls the architecture of yesteryear. The land, located at the corner of West Sierra and Page Street, was purchased in 1906 for $100 in gold coins. The driving force behind the project were 13 people from the Cotati Congregational Church, as it was called at the time. One of them had family connections in Boonville, where they traveled to procure and load redwoods onto wagons. The trees were crushed at Fort Bragg and then transported to Cotati. The church was built in less than a year, a feat that was accomplished thanks to the dedication of these 13 people who had the determination to make their dreams a reality. In 1909 the adjoining property was purchased for $10 and in 1910 Fellowship Hall was built.

In the 1990s there was a break with the doctrine of the Congregational Church of Cotati and an undoctrinaire spiritual community was created. Patrick began his work at the church in 2000. Over the years he has held several different positions including Council Minister, Assistant Minister, Co-Minister, and then in 2016 became a Minister when Vivienne Clark retired to the age of 90.

Their statement of purpose is: “We are a community of seeking, thinking and creating people who strive to incorporate spiritual principles and universal truths into our consciousness, thereby enriching our lives.” The congregation is small, but new members are always welcome.

Services begin with an opening statement focused on expanding consciousness, followed by songs accompanied by a pianist, then a congregational message, followed by a ten-minute meditation. The purpose of meditation is to get in touch with the divine within. Patrick offers hints to help the process along. Focusing on the breath, imagining a bright light in front of you, or trying to open your heart to the divine are all methods that could offer a good start. After the meditation there is a 15-20 minute message on spiritual truth. This is Patrick’s assertion that people have been dumbed down in a global society. He wants people to think for themselves and co-create their own lives. The services are streamed live and can be viewed on YouTube.

In addition to church services, a wide variety of support groups are offered, including AA, ACA, NA, OA, Al-Anon, Nar-Anon, Refuge Recovery, and Life Ring. The church also has an active partnership with the COTS Homeless Center in Petaluma, the Living Room in Santa Rosa, the NOAH Food Pantry in Rohnert Park, and gives tithes to nonprofit organizations. Last but not least, they have a group called the Crisis Wranglers, who offer help with food, clothing, and the basic necessities of life, whether the crisis is a natural or personal disaster.

Monthly entertainment is offered at the church’s community cabaret in Oaks. The principle behind offering group performances is that music provides stress relief. The church began a collaboration with the non-profit organization, Live Music Lantern, currently still operating in Petaluma. Free tickets to musical events were offered to teachers, counselors, psychiatrists and various other groups of people who worked in high-pressure jobs. As a bonus, he also supported local musicians. Live Music Lantern started the process with funding and continued for two months. Those two months provided incentive and enough money from donations for the church to continue the process.

The venue was closed in 2020 due to Covid. It reopened on April 30 with popular local folk/rock band The Bluebyrds. Patrick describes the place as “free music for people who need to be free” and a “living module of joy”. People can dance in a safe place and have fun. He added: “He stays alive because joy wants to perpetuate itself in our lives. That’s why it’s special. Patrick practices what he preaches. For 15 years he has been singing and playing guitar with friends for non-profit organizations such as the Council on Aging and in nursing homes. The band are aptly named Take Yer Medicine because they believe music is the best medicine for anything that could make you sick.

Sunday services take place from 11:00 a.m. to 12:00 p.m. Patrick summed up the ongoing work of the church saying, “What we are doing as a spiritual community in this small town is amazing.

Marilyn Lane is a Sonoma County resident who worked as a newsroom employee for The Press Democrat for 27 years.

Marilyn Lane is a Sonoma County resident who worked as a newsroom employee for The Press Democrat for 27 years.

Jews struggle to find places of worship in Dubai