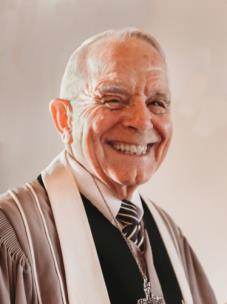 The Rev. Dr Gordon Clifton Goodgame, Sr., who was a popular minister at First-Centenary United Methodist in the 1980s, died at 87 years old.

He died Wednesday at Mission Hospital in Waynesville, North Carolina, surrounded by his family.

Member of the Holston Conference of The United Methodist Church, Dr.

Goodgame was Executive Director of the SEJ Administrative Council and the Junaluska Lake Assembly from 1994 to 2000.

As a resident of Lake Junaluska, he has been a regular part of the life of First UMC, active in the Waynesville Rotary Club with 17 years of perfect attendance, has been director and president of development and public relations on the board of Givens, chaired the County Alzheimer’s Walk for three years, and has worked continuously for this cause. He chaired the Lake Junaluska flea market in 2005 and 2006, worked with the United Way award committee and has always supported many local charities and foundations.

Funeral arrangements are by Wells Funeral Home of Waynesville. Arrangements will be announced later.

Siouxland Church welcomes a trunk or a treat