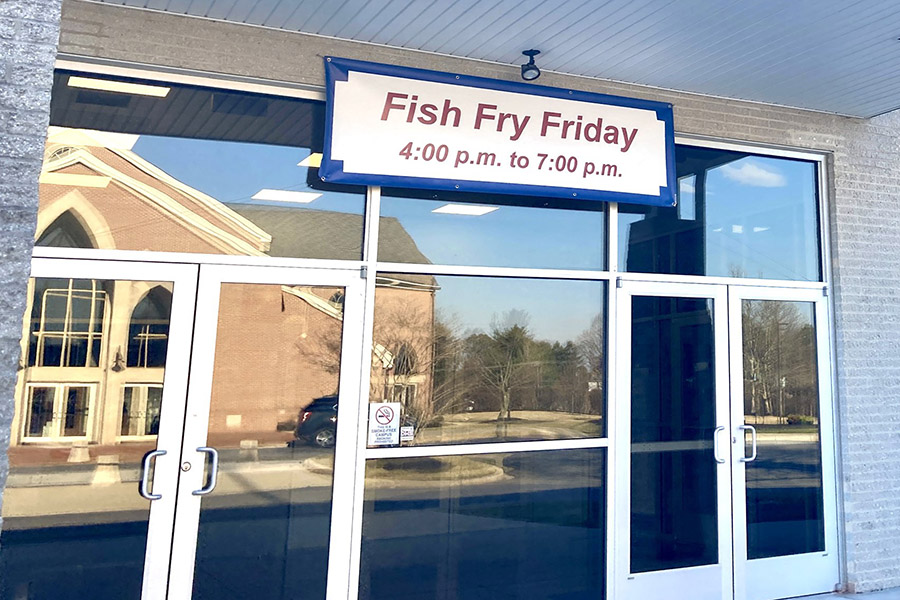 Friday fish fries are starting to come back this Lent

WESTMINSTER (CNS) — Lenten Friday fish fries, a staple in many Catholic parishes in parts of the United States, were among many things put on the back burner during the coronavirus pandemic.

In 2020 parishes received one or maybe two fish fries before the country went into lockdown. By the following Lent, most parishes either had none or only offered them as take-out events, and often drive-in.

But this year, as the country seeks to regain some sense of normalcy with COVID-19 case counts dwindling and mask mandates lifted, fish fries are cautiously returning with take-out and eat-in options. . Yet fewer churches are welcoming them than before the pandemic.

“We need it!” said a St. John’s parishioner in Westminster at the start of the second fish fry of the year on March 11, when the parish served around 560 meals.

St. John’s Church started making fish fries in 2006 and has maintained the tradition ever since, although the parish had to stop them abruptly in 2020 and only offered take-out meals last year.

For this year’s fish fries, queues are already forming before the doors open at 4 p.m., and steady crowds have continued until the deadline three hours later.

“It is extremely important these days and with the war going on. … It brings the parish together,” said Gini McKain, who worked the dessert table to benefit the parish’s Ladies Sodality group.

Jean Ditman, a longtime parishioner, who came with her husband, Dean, agreed that it brings the whole community together. Her husband pointed out that you meet parishioners that you might not normally see because they attend different masses.

St. John’s fry are also the “only game in town” right now, pastor Father Mark Bialek told Catholic News Service. He noted that other local churches are not doing them this year, so the parish receives diners from the larger community and even further afield.

His comment was also a reminder that Lenten fish fries are not just Catholic, but something Methodist, Baptist and Lutheran churches offer.

The priest, who greeted people who filled the parish hall on March 11, said the parish event is a combination of community building, fundraising and evangelism. Confessions begin at the church during the last hour of fry and just after, the Stations of the Cross.

The parishioners not only come to the dinners, but they are also involved in the volunteer work necessary to make them happen.

Once customers select baked/fried fish or vegetable lasagna and two sides, they get a number. A young volunteer – from a group of about 30 at each fish fry – fills the order in the kitchen – made up of volunteers at a cafeteria assembly line – and delivers it.

But the work begins long before the crowds line up and ends long after they leave, as Teresa Richardson and Anna Ludwig — co-chairs of the fry and the last to leave when the hall is clean — can attest.

Ludwig orders all the food each week — including 215 pounds of farmed basa, a type of catfish — and plenty of tartar sauce.

The fry cooks set off a few hours before the doors officially open. No secret recipe was leaked to this reporter, but since it was in Maryland, the two large containers of Old Bay seasoning on the counter were no surprise.

Throughout dinner, Richardson moves back and forth between the kitchen and the dining room like a restaurant manager making sure people have what they need and his team of young servers are on top form. .

St. John’s fry are advertised by word of mouth and a sign at the end of the church driveway. It was also listed in a directory of the Archdiocese of Baltimore’s Friday fish fries along with a handful of others, including some sponsored by the Knights of Columbus, frequent sponsors of fish fries across the country.

That number is lower than normal for the parishes of St. Paul and Minneapolis, the newspaper points out, noting that some churches are waiting until next year to resume dinners. At the start of Lent in 2020, 93 of these parishes had fish fries and only 24 last year.

Fish fries across the country have different menus, such as catfish, lobster, crab cakes or shrimp with sides ranging from potato salad to puppies and different vegetables, but almost always from cabbage salad. They are said to have started in the 1920s in German communities in Wisconsin; today they take place in parish halls and even in restaurants across the country.

One thing that parish events have that is definitely appealing is the unlisted service of tradition and fellowship. In St. John’s, it was as palpable as the smell of fish in the parking lot air. People just seemed happy to be together after two very long years of pandemic uncertainty.

And although the former pastor, Msgr. Art Valenzano, who came up with the idea for this parish 16 years ago, had no idea what the parishioners would end up going through with the pandemic, he had a main reason why the church on the hill, as Saint-Jean is described, should start this event.

He thought it would create a community.