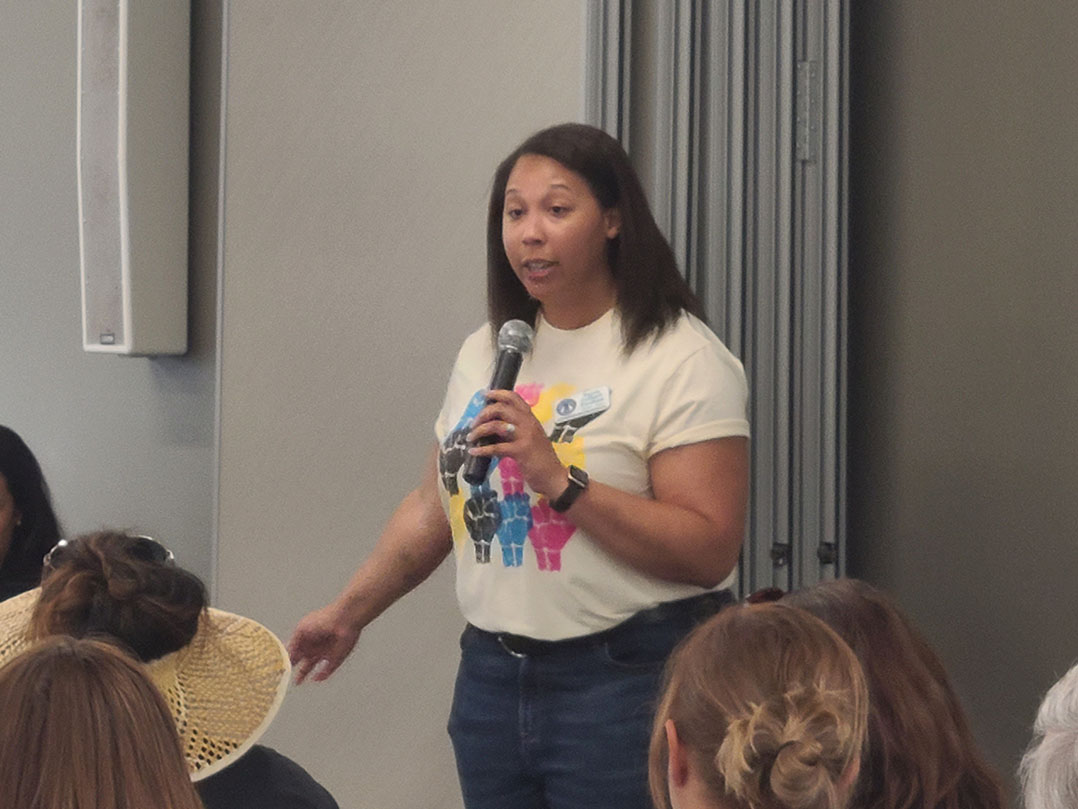 Elected officials and presidential candidates representing Hamilton County are encouraging Hoosiers to voice their support for pro-choice rights when the state legislature meets for a special session later this month.

More than 75 people stood in solidarity July 2 at a rally hosted by the Hamilton County Democratic Party inside Holy Family Episcopal Church in Fishers, which featured candidates for state office and federal. The event was designed to create an atmosphere for those concerned about the issues to be addressed at the special session scheduled for July 25, said Dayna Colbert, chairwoman of the Hamilton County Democratic Party.

The concerns of those present follow the decision of the United States Supreme Court to strike down the constitutional right to abortion, leaving it to the states to decide how to handle the proceedings. The special session in Indiana is expected to “take action to protect lives,” Republicans say, though it’s unclear what restrictions or possible legislation lawmakers might be discussing. 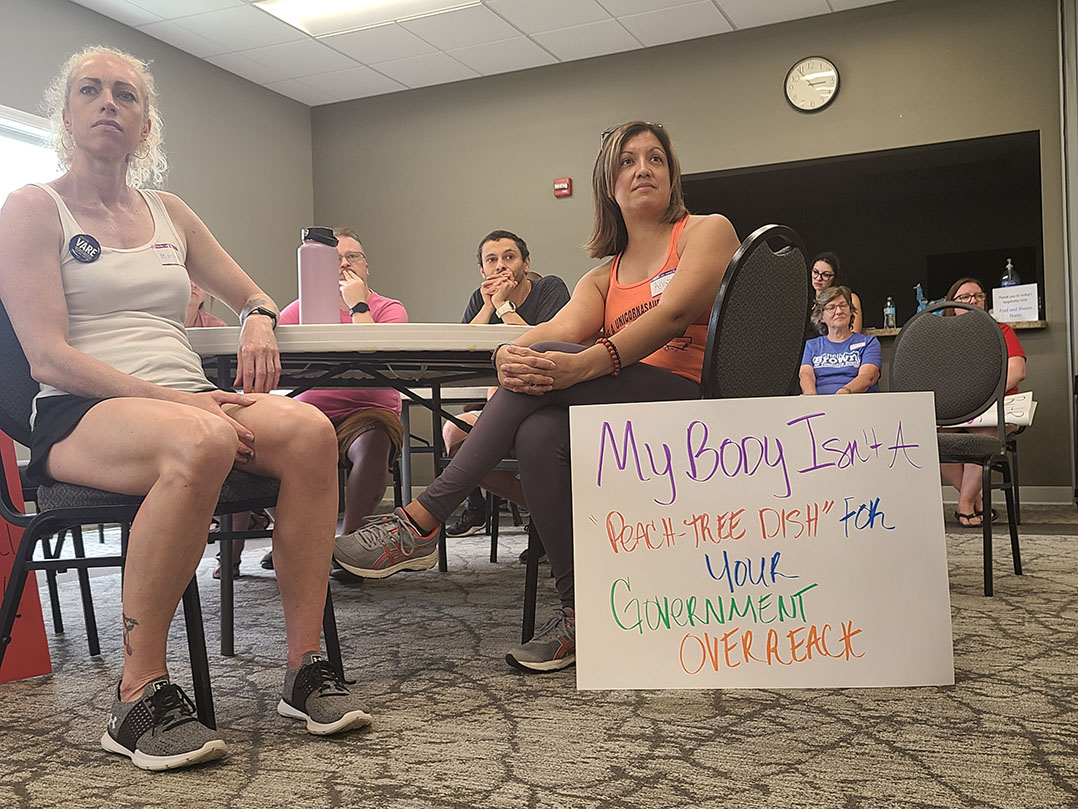 Colbert said it was important for people to come together at the Indiana Statehouse because that’s where change is happening, adding that she believes individuals should have the right to make choices about their bodies, whether whether or not they can bear children.

“We want to bring together people who also feel this to have this choice and give them the tools to step forward and deliver this message,” Colbert said.

Colbert said the Hamilton County Democratic Party is concerned the General Assembly has signaled support for Indiana’s abortion ban, though the extent to which that remains unclear.

“We are also concerned about our choices and our options in Indiana,” she said.

The rally brought together more than half a dozen elected officials and contending candidates, many of whom urged those present to stand up and make their voices heard. Attendees seated at tables were also encouraged to make signs ahead of the July 25 session outside the Statehouse.

Among those criticizing Republicans at the state level was state Rep. Sue Errington, who said decisions about abortion should remain between a woman and her doctor.

“Republicans have been calling for an abortion ban for years,” Errington said.

Errington also told those in attendance that she had pledged to stand up for reproductive rights in Indiana, urging individuals to lobby elected officials for answers. 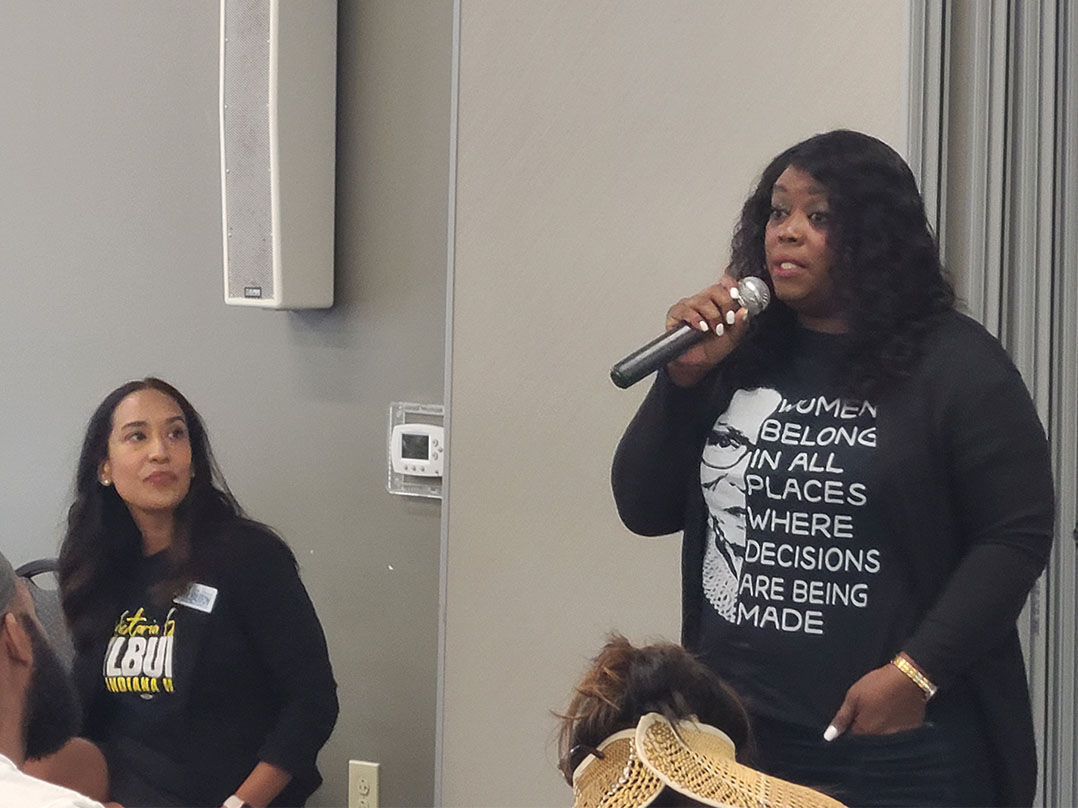 Candidate Jeannine Lee Lake, who is running for the U.S. House of Representatives to represent Indiana’s 5th congressional district, speaks during a July 2 rally at Holy Family Episcopal Church at Fishers. (Photo by Matthew Kent)

Jeannine Lee Lake, who is running for the U.S. House to represent Indiana’s 5th congressional district against incumbent Republican Victoria Spartz in November, also appeared at the event wearing a shirt of the late Justice of the United States Supreme Court Ruth Bader Ginsburg with a slogan, “Women belong wherever decisions are made.

Fishers Councilwoman Jocelyn Vare, who holds a universal seat, is running for Indiana Senate in District 31 and also said it’s important for people to get out and make their voices heard. Vare encouraged those in attendance to speak to their neighbors, saying Democrats are working hard for all Hoosiers.

“Hamilton County is a purple county and it’s time we acted like it,” Vare said. “Please come to the Statehouse. This is how you make your voice heard.

Fisherman resident Angie Lopez was there with her friend Monica Moehring. The two women said they plan to gather at the Statehouse later this month.

Lopez created a sign that read, “My body is not a ‘fish dish’ for your government’s overreach” and described the decision to overturn Roe v. Wade as “just ridiculous”.

“I never thought we’d be here,” Lopez said. “I was stunned.”

Victoria Garcia Wilburn, who is running for House District 32, is an occupational therapist and has expressed concern that the Supreme Court’s decision to overturn Roe v. Wade stands for Indiana women. In Indiana, 33 counties do not have an OB/GYN available, Wilburn said.

Wilburn described the recent Supreme Court ruling as “a complete overreach,” saying abortion is a decision that must be made between a client and their provider.

“It’s not a political decision,” she said.

Still, Wilburn said attendance at the church indicated that issues such as abortion mattered to voters and noted that the current supermajority was not in line with what mattered to them.

She also asked individuals to stay energized moving forward, urging them to “fight the good fight”.

“You are an inspiration to all of us,” she said.

The community comes together to remember Marvelous Walton