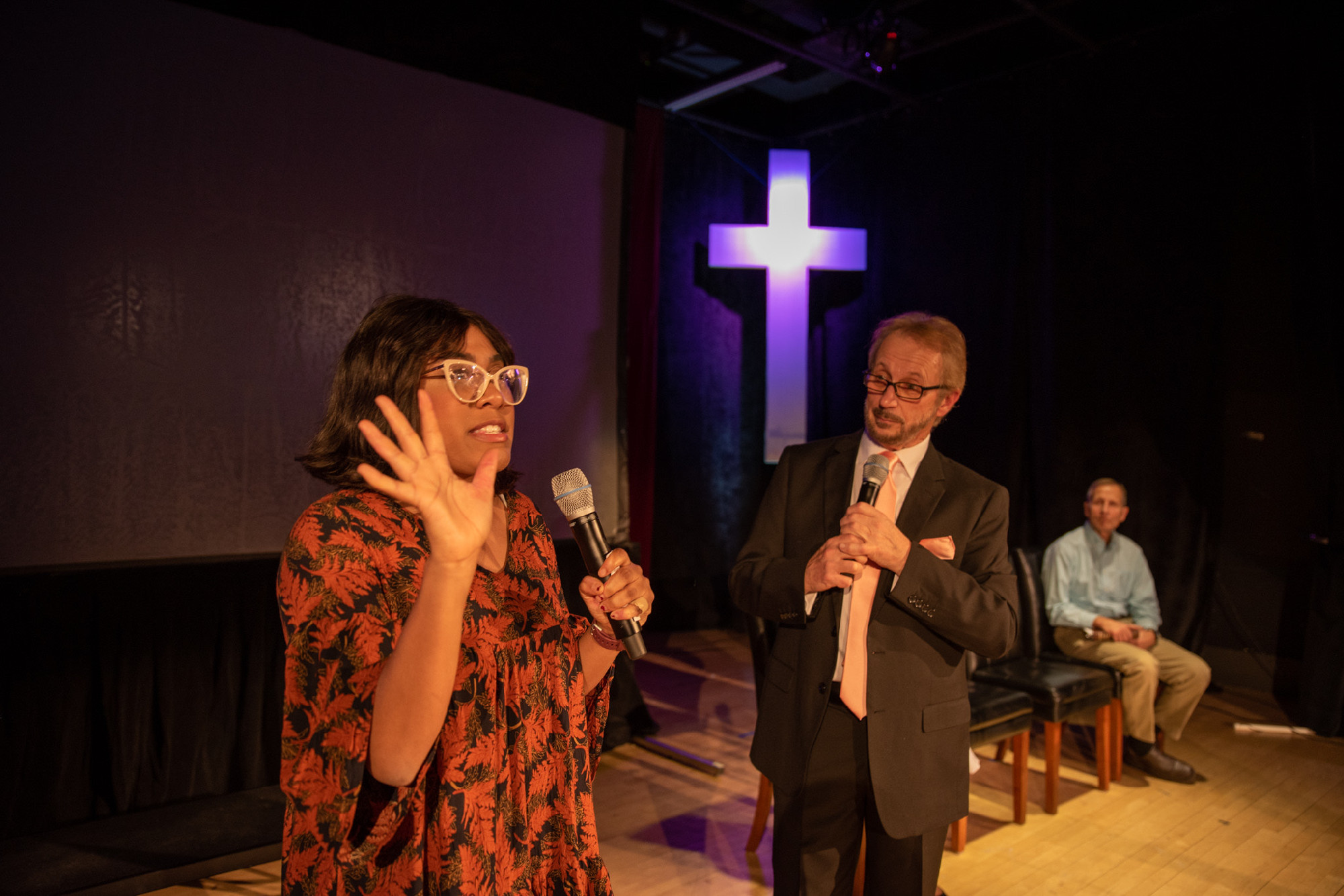 ALBANY – As a pastor’s son, I found personal resonances in “The Christians” by Lucas Hnath (himself a preacher’s child). But you don’t have to be a religious affiliate to appreciate the issues raised here, now in a well-done production by a new troupe, Harbinger Theater.

Hnath places the audience in the congregation of a mega-church, led by Pastor Paul (Dennis Skiba), a man who has led the church from a handful to over 1,500 parishioners – and continues to grow. In today’s service, Pastor Paul announces that the debt for this state-of-the-art building has been paid off.

But he also has another announcement, a decision he made based on a poignant true story he tells us: This church will no longer believe in Hell.

And so begins a series of meetings that Pastor Paul has with his Associate Minister (David Quinones); an elder (Ken Klapp); a faithful, Sister Jenny (Monet India Thompson); and his wife (Amy Hausknecht), conversations that turn into a deep and uncomfortable dialectic about the promise of paradise exclusively for good people and true believers in Jesus Christ.

At one point Paul said, â€œI believe I’m doing what I’m doing because God told me to,â€ to which Sister Jenny, who is on the other side, said, â€œMe too! (Ask the Supreme Court as it weighs the arguments for and against abortion. Think about our current state of politics or public education ideas.)

How does a congregation stay together? How does a civil and pluralist society stay united? How do religious individuals reconcile competing messages when the stakes – heaven and hell – are so high?

And what is the role of any leader – to support the leader’s wishes or to inspire followers to think in new terms?

If the piece starts out slowly, it generates interest as it goes. But I think we need the start – with the choir, confidently singing hymns of belief (â€œHold to God’s Unchanging Hand,â€ for example), like he does on any other Sunday – in order to enjoy the time. huge upheaval caused by Pastor Paul’s statement.

Founder and director Patrick White knows who to call for technical support for a successful production. They are there. I particularly liked the blue hangings evoking a sanctuary; pre-show organ music; and lighting, sound and projections (congratulations to Nick Nealon).

Klapp captures the nervous energy of a man delivering a thorny message from the board to Pastor Paul, whom he likes.

Thompson emotionally pours out her passion and frustration as she moves from gratitude for the support of the church to the discomfort of having to think about things she thought she knew.

In a touching performance, Hausknecht captures the challenges of standing by his man’s side and defending himself. The interactions between Skiba and Hausknecht are heartbreaking.

As Paul’s spiritual and intellectual foil, Quinones expresses the difficulty of disagreeing with this father figure. At first, the partner is brash and confident; afterwards, he is shattered and stunned. A great performance.

And Skiba is wonderful everywhere, not a showman preacher, but a quiet man, someone who has to ponder accusations of hypocrisy because he wants to know his own soul as much as he wants his parishioners to know theirs. His fight with others is skillfully done, with thoughtful pauses and quick aftershocks. Here’s where White’s attentive ear for stimulation comes in handy.

This script raises existential questions for us as mortals and questions as members of our various social tribes. Answers? No. But Hnath makes us think, and maybe talk, and that’s one of the reasons we go to the theater.

More from The Daily Gazette: