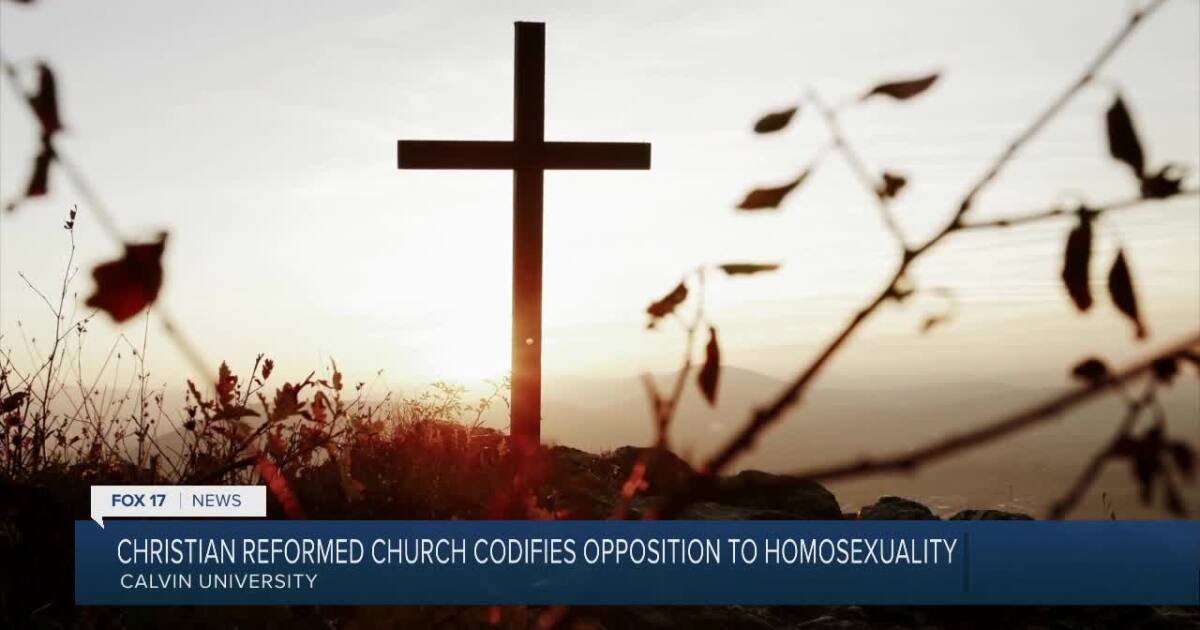 GRAND RAPIDS, Mich. — On Tuesday at the evangelical denomination’s annual synod at Calvin University, the Christian Reformed Church voted to codify homosexuality as a sin and therefore intolerable within the church. This has left many faculty members and students at Calvin – CRC’s flagship academic institution – pondering their place at the university and within the church itself.

After two days of debate at Synod, the vote was 131 to 45 to approve a list of sins the denomination deems intolerable, including “adultery, premarital sex, extramarital sex, polyamory, pornography and homosexual sex”.

“While there was easy agreement on some topics such as pornography, LGBTQ+ issues were much more divisive,” CRC spokeswoman Kristen Vanderberg said in a statement to FOX 17 on Tuesday. “Today the Synod voted to strengthen its position on human sexuality by recognizing that this position is taught in its denominational statements of faith. The implications of what this means for pastors, university professors, staff and other members who disagree with the position should be discerned.

The decision was something the church began considering years ago. In 2016, the CRC commissioned a report on human sexuality to research where the church should fall on the controversial issue based on biblical teachings. But many in the church say the report, written by a group of synod members, is deeply flawed and will further divide the denomination.

The report prompted the decision and was considered a “helpful summary of biblical teaching regarding human sexuality” by the Synod.

“This study of the relevant biblical texts has shown that the scriptures clearly, consistently and convincingly teach that homosexual acts of any kind are sinful and are not in accordance with God’s will for his covenant people,” reads in part of the study. “This does not mean that people with same-sex attraction will lose their homosexual orientation on this side of Christ’s return. Nor does it mean that they will cease to be tempted, as Jesus himself was tempted.

LGBTQ+ issues have been a recent flashpoint at Calvin, the CRC’s flagship academic institution and host of the 2022 Synod. In March, Calvin essentially fired a professor for performing an LGBTQ wedding. LGBTQ affirmation issues have plagued other faiths as well. The Reformed Church in America and the Methodist Church have recently split over the same issue.

“What was shared by everyone was a desire to love and care for people in the LGBTQ community,” Venderberg said. “We want them to know that God loves them and the church loves them. We want to take care of them and walk alongside them. What was also shared by everyone is a commitment to scripture and our shared faiths. We want to do the will of God and lead a godly life. Where the delegates differed was in how they found the balance between these two things.

Despite the ruling, Calvin allows the student group Sexuality and Gender Alliance on campus and has not challenged the choice of an openly gay student body president in 2021. The last time the CRC spoke out on homosexuality , that was in 1973. In that decision, the church decided same-sex attraction was not necessarily a problem, but acting on it was. This led to more LGBTQ members joining, and now an exodus some fear may be coming.

“I know people who have already left, a number of people who have already left. I know students who left that,” said Elisha Marr, associate professor of sociology at Calvin and head of gender and sexuality studies at the university. “I feel like in a Christian institution, I shouldn’t have to choose how to fully and wholeheartedly care for others.”

Marr, who graduated from Calvin and worked there for thirteen years, is one of many now faced with a terrible choice. As head of gender and sexuality studies at the school, she is firmly on the side of affirming LGBTQ lifestyles — she also has a daughter who identifies as non-binary.

Marr noted that upon hiring, Calvin teachers must sign an agreement stating that they will teach according to the values ​​of the churches. But when she signed it more than a decade ago, the parts covering marriage and sexuality weren’t as specific as the decision on Tuesday, so she fears it could affect her classes and her students.

“In this case, I fear that we are not going to prepare our students to be able to compete in the world because we are hiding accurate scientific information from them,” she said.

She also worries about their mental health. Marr says several of her students have approached her with concerns about what the non-affirmation decision will mean for them, and some have even expressed suicidal thoughts.

“I can’t continue to be a part of this, and so I’m really, I’m just going to go back this summer and this fall and just advocate for the ability to continue to take care of students,” Marr said. “Because no matter what, we have to put their interests first.”

Here is the full statement from the Christian Reformed Church:

“The Christian Reformed Church of North America is committed to the task God has given us as a church: to proclaim the good news of the kingdom of God that transforms lives and communities around the world.

“In today’s culture and society, in order to answer this call and live our witness to the gospel, it is necessary for the church to respond to issues related to the LGBTQ+ community.

“Yesterday and today synod – the annual decision-making meeting of the denomination – had a long discussion on issues related to human sexuality. We all agree that these are issues we have neglected to talk about enough often and are important enough in our society that the church should address them.While there was easy agreement on some topics such as pornography, LGBTQ+ issues were much more divisive.

“The CRCNA’s official position on homosexuality, established by the 1973 synod and affirmed by several subsequent synods, can be viewed on our website. It is composed of definitions and pastoral advice.

“Since 1973, and especially in recent years, CRC congregations have struggled to understand how to live within the pastoral guidance that has been offered. This has led different congregations to different places based on their own interpretations and deliberations.

“A study committee was charged with articulating a foundational biblical theology of human sexuality. This report was approved yesterday as providing a useful summary of biblical teaching regarding human sexuality. And yet delegates wavered and debated how to move forward to make a position on homosexuality something that is denominational or binding on all who hold ordained office in the denomination.

“What was shared by everyone was a desire to love and care for people in the LGBTQ community. We want them to know that God loves them and the church loves them. We want to take care for them and walk alongside them. What was also shared by everyone is a commitment to the scriptures and our shared faiths. We want to do the will of God and live godly lives. Where delegates differed, it was in how they found the balance between those two things.

“Today, the synod voted to strengthen its position on human sexuality by recognizing that this position is taught in its denominational statements of faith. The implications of what this means for pastors, university professors, staff and other members who disagree with the position should be discerned.We plan to share more information with churches and members in the coming weeks.