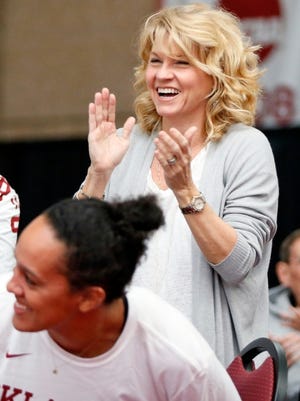 At the University of Oklahoma in Norman, Sherri Coale transformed the world of women’s basketball.

Growing up in Healdton and then attending Oklahoma Christian, she has become an outstanding coach. She is also an incredible motivator and a strong believer.

Now that she’s retired from that hundred miles an hour job, Coale has a refreshing and positive blog. Here’s part of the last entry, titled “The School of Applause”:

Every year it would happen. Every year. For sure.

We would come together like teams do on center court to ceremoniously start training and it would happen. Everyone would applaud – the players, the coaches, maybe even the managers – but only three or four will actually make sound come out.

It was like some kind of soft hand disease. People’s palms connect (although sometimes in severe cases only their fingers!), But it didn’t make a sound. There was no force of air coming out of the middle. The sound, or the lack of it, more like two clouds bumping into each other making the air “shhh”.

Thanks, but no thanks. Non-tap dancing can’t imagine that anyone noticed it or that it matters the least. The attentive know that nothing has ever counted more.

People always say you can hear a healthy church. Loud auditoriums that the preacher has to suppress before the service begins are the ones you want to be a part of. You can hear blood flowing through the veins.

Workout gyms are not entirely different. You can smell and hear those who are prospering. They literally vibrate with life. And if clapping doesn’t guarantee anything, not clapping while clapping almost always does.

What a good point. Coale actually organized a “school of applause”.

Because it’s important to applaud. Putting our hands together, with the intention of making sound, means that we are “present and not distracted”. It’s also a picture of how we think about our role on the team – or is it all about ourselves?

The most important point made by Coale is that clapping is about “giving your energy away”. She urges us to remember having been in an arena or stadium. Remember that thrilling feeling of the oneness of thousands of hearts – and hands – that become one?

Coale concludes, “The ability to energize others is one of the most underrated life skills of all time, no matter which country of life you choose. “

It resonates with me. I’ve often wondered why people like Coale and so many others who grew up in small towns, with relatively little exposure to the world, have the courage to think they can compete on big stages. Perhaps one of the reasons is the huge opportunity in small, tight-knit communities to be the recipient and provider of vigorous applause.

When you play sports, walk in the group, sing in church, lead a cheer at a congregation or cheering game, talk to Girls or Boys State, serve as a class officer or lead other organizations like the FFA / FHA, there are lots of opportunities to applaud. This affirmation permeates you and makes you grow with a strong and resilient identity.

A foundation of faith provides the same.

Love stories in Sunday school early in life, small groups of young people going out together to help their communities, circles of friends holding hands to pray or sing about God’s love – a sense of belonging to the family of God develops. love that changes life. If we have ears to hear, heavenly applause accompanies our successes, our efforts, our joy for God and our desire to love our neighbor, without exception.

If you take this concept of applause to a deeper level, it reveals the reason why we aspire to share the energy that we have received. It is the fruit of the seed of the enormous love and mercy of God. And it’s extended to us.

At church recently, we heard about the story of the prodigal son told in the book of Luke. It’s a familiar story. The youngest son is in a mess and asks his father for all of his inheritance – right away. Then he goes to waste it and hits the bottom of the barrel. In a sorry state, he realizes that his best option is to go home. Being a servant with his father is better than anything he has to go elsewhere.

Can’t you feel his despair? Yes, he was stupid. But who hasn’t been? As he approaches the house, the father sees him from afar and, knowing only that his lost son is coming home, runs to greet him.

Tears come to my eyes when I get to this part of the story. Jesus tells us how God loves us. As much and without a doubt. Kill the fattened calf, dress the lost and found son in the finest robe, and put a ring on his finger and shoes on his feet.

Can’t imagine the wild applause in paradise too? Because this depth of compassion is at the very heart of our faith. Regardless of our sin or foolish behavior, if we just look home, no one will run faster to kiss us than our Heavenly Father. And no one will applaud louder than his choir of angels.

“But while he was still far away, his father saw him and had compassion, and ran, kissed him and kissed him. And the son said to him: ‘Father, I have sinned against heaven and before you. . I am no more worthy to be called your son. But the father said to his servants, “Quickly bring the most beautiful robe, and put it on him, and put a ring on his hand and shoes on his. feet. And bring the fat calf and kill it, and let’s eat and celebrate. This is why my son died and lives again, he was lost and he is found. And they started to party. (Luke 15 20-24). ”

The Rise of Desire for Church Shuttles – Lomabeat.com

Local contribution sought for the Synod of Bishops