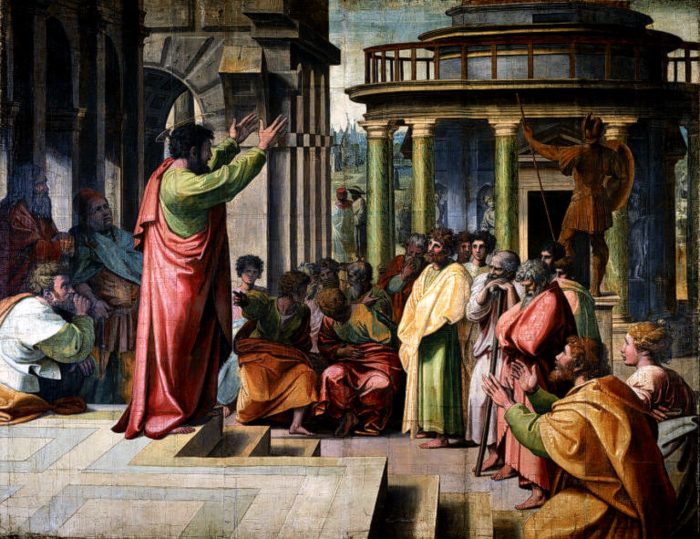 In the footsteps of Saint Paul through Greece

Saint Paul made two missionary trips to Greece bringing Christianity to his people; from there it quickly spread to all other Western European countries of the time.

Paul the Apostle, commonly known as Saint Paul, is considered the most important of the Twelve Apostles for the dissemination of the teachings of Jesus to the world of the first century.

According to the New Testament book Acts of the Apostles, Paul was sent on three separate missions to spread the word of Jesus to the rest of the world.

Paul first visited Greece on his second missionary tour, coming from Troy in Asia Minor, to today’s Turkey. The year was around 49 AD.

According to the account of the Acts of the Apostles in the New Testament, the occasion was a vision that Paul had one night while in Troy.

In the vision, a Macedonian stood before him and begged him to cross the Aegean Sea and further into Macedonia, to bring the word of Christ to his people.

Paul himself and his associates saw in this vision an invitation from the Lord to preach his gospel in this region of Greece.

Obeying divine command, Paul and his associates sailed from Troy to Samothrace, and from there to Kavala.

From Kavala, the mission headed on foot to the city of Philippi. After a relatively short stay there, Saint-Paul and his associates followed the Ignatia Odos through Amphipolis
and Apolloniada for Thessaloniki.

In Thessaloniki there was unrest, as the Romans refused to allow the mission to preach the word of the Christian God.

The mission then left for Veria; however, they were forced to leave this area for the same reason.

The next stop for the great Apostle was the famous city of Athens, to which Saint Paul arrived by sea.

Athens, seat of Plato’s Academy and Aristotle’s Lyceum, cradle of Western civilization and cradle of democracy, had passed its peak by the time the apostle visited the city.

The Apostle visited the Agora several times, where he did not meet enthusiastic listeners. The predominantly pagan audience was not responsive to his words about the resurrection of Jesus.

Some Athenians took Paul to a meeting at the Areopagus, the high court of Athens, to explain his words.

It was for the first time there that the nature of Jesus Christ and Christianity was presented to a pagan, but well-educated audience.

Saint Paul explained the ignorance behind the worship of pagan idols. He explained the meaning of one God, the Creator of all and his relationship to mankind and called on his audience to know God instead of worshiping “an unknown god” as they did – apparently aware that there must be another presence there that was not represented by pagan deities.

Some Athenians immediately became disciples of the Apostle, paving the way for the conversion of more people to the new and true faith.

The place where Saint Paul preached on Areopagus Hill, just at the foot of the Acropolis, is today marked with a bronze plaque inscribed with the words he used to tell the story in the Bible (in Greek).

From Athens to the bustling Corinth

After the decline of Athens, the commercial and political center of Greece under Rome had moved to Corinth, just 84 kilometers west of Athens.

Saint Paul’s mission in Greece continued and he went to Corinth where he spent eighteen months proselytizing to the public. There he met and worked with the Jewish tentmakers Aquila and Priscilla, who are mentioned in the Bible.

During his stay, he reasoned and preached the Gospel to the Jews of the city, however encountering strong opposition from members of the large Jewish community in the city.

Nevertheless, Saint Paul founded the Church of Corinth. From there he traveled to Ephesus, a city on the west coast of today’s Turkey, and then to Caesarea and Antioch to complete his mission.

The apostle later returned to Ephesus on his third missionary journey and remained there for three years.

While in Ephesus, Saint Paul received startling news from Christians in Corinth regarding rivalry, jealousy, and immoral behavior. His congregation asked for advice on solving such problems.

Saint Paul’s First Epistle to the Corinthians addresses questions of division, morality, personal conflicts, sexual purity, marriage and the correct form of Christian worship, and offers solutions based on the teachings of Jesus.

Saint Paul returned to Greece twice as part of his third missionary trip.

In the second letter, he affirms his affection for the Corinthians, while affirming the importance of forgiving others, and the importance of being a person who reflects Christ and gives generously to God’s people.

The Apostle instructs the faithful on collecting for the poor in the church in Jerusalem, and concludes with a controversial defense of his apostolate.

However, neither of the two epistles had the desired results, and the apostle Paul finally made a brief visit to Corinth in the spring of AD 56.

In the winter of the same year, Saint Paul visited Philippi. There he heard the good news from Corinth which led him to send a third epistle to the Corinthians to correct alleged misinterpretations of the first two.

After Philippi, Saint Paul headed for the south of Greece by sea, via Nikopolis,
a large port of the time, which today is located near the town of Preveza.

From there, the Apostle appears to have boarded a ship that landed at Lechaio, the port of Corinth in the Gulf of Corinth.

It was during Saint Paul’s stay in Corinth that he wrote his famous epistle to the Romans, aiming to prepare for his long-awaited trip not only to the city of Rome,
but from there and further west, to what is now Spain.

Saint Paul stayed in Corinth for three months this time.

The apostle returns to northern Greece

St. Paul’s next destination was the city of Jerusalem. However,
the discovery of a plot to be murdered by Jews on his way home forced him to
to change his plans.

Instead of boarding a ship for one of the ports in Palestine, the apostle turned north and returned to Macedonia and the city of Philippi.

From there he headed for Jerusalem, making intermediate stops at Mytilene, Chios
(Oinousses), Samos, Kos, Rhodes and other islands.

Thousands of Haitians are allowed to enter the United States, but what happens next?