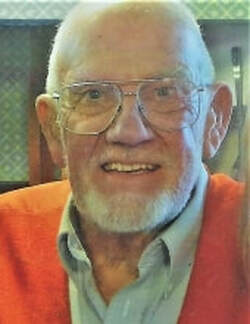 John Orr Kinnaird of Nottingham, Pa., Died at his home of natural causes on September 3, 2021. Mr Kinnaird’s death followed shortly after the death of his 60-year-old wife, Bertha Lloyd Hunt, on June 2.
Mr Kinnaird received home care in his final months and was surrounded by his family in his final days.
Mr. Kinnaird was born in Brookville, Pennsylvania, to Malissa Knappenberger and Malcolm Kinnaird.
He was a graduate of Milton Hershey School in central Pennsylvania and the General Motors Institute. In the 1950s, John was specially selected for a one-time project in the Sea Bees and served in Rhode Island. Returning to civilian life, he met his beloved wife, Bertha Lloyd Hunt, and they were married on November 25, 1960. In 1968, John moved his growing family to Nottingham, Pennsylvania. John spent most of his engineering career with the Sun Oil Company. He retired as a project lead engineer in 1992.

Mr. Kinnaird’s life has been devoted to serving the Church of God, raising his family and looking after his farm. He was the elder in power in the Presbyterian Orthodox Church and the first lay moderator of the Presbyterian Orthodox General Assembly in 1987. He was instrumental in the development of communication systems and speech synthesizers for non-verbal people like his son John. He raised his children in the love and service of God, all of which carry on his tradition of serving as leaders and teachers in their own churches. He spent decades creating his farm, Ebeneezer Acres, as a retreat for downtown churches, various ministries, and his friends and family.
Mr. Kinnaird is predeceased by his wife Bertha, son John, brothers Bill and Lee and sister Lois. Mr Kinnaird is survived by his daughter Malissa with husband Clint Files, daughter Deborah with husband James Perry, son Malcolm with wife Justine Ryba and son David with wife Rachael Barker. He is also survived by 12 grandchildren and their spouses: John Files, Thompson Files, Hunt Kinnaird, Katharine Perry, Addie Anderson, Blair Files, Grace Kinnaird, John Perry, Robert Kinnaird, James Perry, Finley Kinnaird and Drew Kinnaird. He is also mourned by the many friends and family who have known him as Uncle John.
Mr. Kinnaird’s Memorial will be held at 11:30 am September 25 at Bethany Presbyterian Church, 2483 Baltimore Pike, Oxford, PA, 19363. In lieu of flowers, donations can be sent to Westminster Theological Seminary in Philadelphia. Further information is available on the Collins Funeral Home website at ecolinsfuneralhome.com.

Teacher. Wijlens: Church learns to listen to survivors of abuse