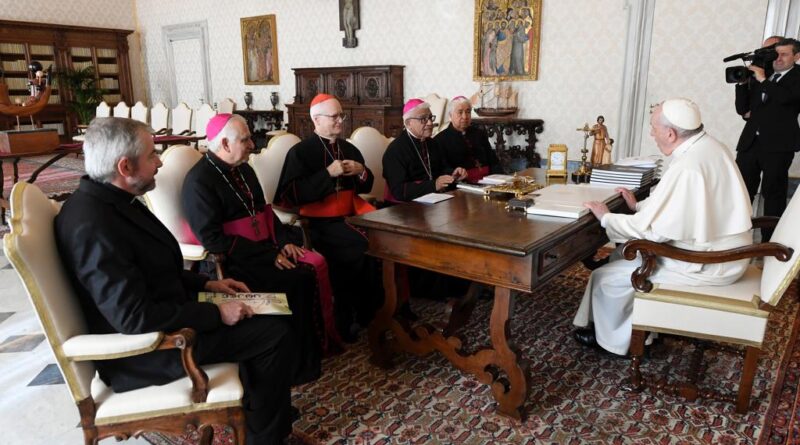 Latin American Prelates Inform Pope of Their ‘Synod Before Synod’

ROSARIO, Argentina — Following a historic meeting of the Catholic Church in Latin America and the Caribbean last November, senior leaders from the region recently traveled to Rome to discuss the fruits of the meeting with Pope Francis.

“We are all very happy, because Francis has blessed our work and our efforts,” said Bishop Miguel Cabrejos of Trujillo, Peru, president of the Conference of Latin American Bishops (CELAM). “We met for over an hour and presented the Church Assembly report to him, the impact it has had and what we expect it will have.”

Archbishop Rogelio Cabrera of Monterrey, Mexico, president of CELAM’s Council for Economic Affairs, said it was evident during their meeting with Francis on Saturday morning that “we can live an effective and affective communion with the Holy Father, who clearly loves Latin America, a region that is in perfect sync with him.

During this meeting, and others with various Vatican officials throughout the week, including Italian Cardinal Pietro Parolin, the Holy See’s top diplomat, the CELAM presidency was able to “project our path towards the forward with great hope, because we know that Latin America has a long way to go pastorally,” Cabrera said.

Absent for cause Cardinal Leopoldo Brenes of Managua, Nicaragua, second vice-president of CELAM. Sources said Node that he missed the trip for two reasons: he is still struggling to recover from COVID-19, which had him hospitalized and then locked up at home for most of 2021, as well as the political and social crisis in courses in Nicaragua.

“For several years, but more so since the start of the pandemic, his eminence has tried to stay put as much as possible, close to his people and safe from any possibility of being banished from his own country,” said a source with knowledge of the situation said. The Auxiliary Bishop of Brenes, Silvio Jose Baez, has been living in exile in Miami for two years at the request of Pope Francis following a series of death threats.

Brenes sent a message to Francis, however, according to Cabrejos.

At the center of the conversations in Rome was the first church assembly in Latin America and the Caribbean held in Mexico City, with participants joining virtually from across the continent, with the aim of both fostering participation and prevent the spread of COVID-19. The meeting last November, said Archbishop Jorge Lozano, Argentine Archbishop, CELAM Secretary General and Archbishop of San Juan, was a synodal exercise that will help guide the priorities of the regional Church in the near future.

“From the point of view of faith, we had a good meeting with the Successor of Peter, who helps us to walk from our love for Jesus Christ and in the service of the people of God,” he said. . “He has given us luminous guidelines concerning this time when the Church is walking on the path of synodality”.

There was also a discussion of the path the Latin American and Caribbean Church is taking towards the Synod. The Presidency of CELAM reiterated its support and continued collaboration, given the path that has been traced, especially at the continental level.

The Prelates and the Pope also covered the social and political situations of some countries on the continent and the challenges facing the Church as a result.

In Colombia, for example, bishops, priests and missionaries risk their lives to expose organized crime and political corruption. In Guatemala, the bishops have become a single voice demanding justice capable of guaranteeing justice, and where there have been no judges on the Supreme Court for more than 28 months. Throughout the region, poverty is on the rise.

Among the “fruits” of the Church Assembly presented to the pope, Lozano highlighted the fact that it presented a “variety of vocations of the people of God”, with participants made up of 20% bishops, 20% priests and deacons, 20% religious men and women and 40% lay men and women.

The use of technology, Lozano said, was also striking, as organized, managing to connect around 1,000 congregation members from different countries and having moments of prayer, dialogue, study in addition to presentations. .

Another key, he said, was the connection to the universal Church: “We had the presence of representatives of Churches from all continents except Africa, due to travel complications.”

Among the meetings in Rome there was one with the Secretariat of the Synod of Bishops, during which, according to Lozano, they also talked about the experience of the Church Assembly, since it was a synodal experience that serves as a continental-level kick-off for an October 2023 World Synod in Rome.

Lozano knows Pope Francis well, having served as one of his auxiliary bishops for six years when Cardinal Jorge Mario Bergoglio was then Archbishop of Buenos Aires. The two men had a private conversation before the one in which Lozano took part as CELAM secretary, during which they discussed “our beloved Argentina”. During his conversation with Nodehe preferred not to go into details, only addressing the fact that they had spoken of the late Cardinal Eduardo Pironio, who since Saturday has been considered a “servant of God” by the Church, one of the stages on the way to holiness.

RELATED: Recalling a Cardinal Who Could Have Been Argentina’s First Pope

Pironio, considered a co-founder of World Youth Day with Pope John Paul II, was an Argentinian cardinal, considered papabile during the conclave which elected the Polish cardinal Karol Wojtyla, was a member of the leadership of CELAM for eight years, before being summoned to Rome in 1975 by what he called his friend, Pope Paul VI, to lead the Vatican Congregation for Institutes of Consecrated Life and Societies of Apostolic Life.

Finally, Lozano said, another issue on the agenda, both during these days of meetings in Rome but beyond, is the role of women in the Church and in society. For the past year, a group of women from different backgrounds – religious and lay – have been reflecting on this question, including the different ministerial roles opened up to women by Francis, including those of catechist and reader.

“Measures are being taken,” Lozano said.