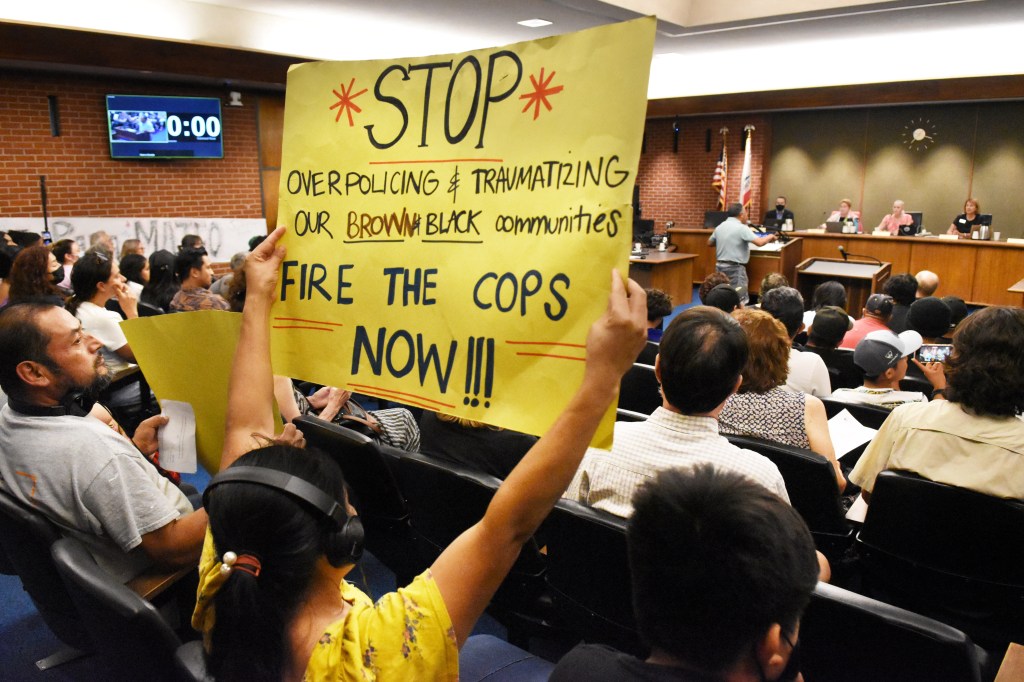 The Latino community and their supporters packed San Rafael City Hall this week demanding justice after a man was bloodied by police during a violent arrest over an open container.

Dozens of residents supporting the man, whose name has not been released, gave passionate and tearful testimonies on Tuesday, urging the city council to take action in a discussion that lasted nearly four hours.

The overflowing crowd spilled out of the council chamber and into the lobby, and even more speakers lined up to speak to the council during public opening hours. The discussion was not part of the city’s scheduled agenda.

Video of body from violent encounter with police is currently under investigation in San Rafael @marinij pic.twitter.com/ut0MZZPate

“We have a whole community that has been traumatized by what happened,” said Samantha Ramirez, winner of the city’s 2022 Citizen of the Year award, noting that social media feeds were flooded Friday with video of the arrest.

“You want to have this performative stuff: ‘It’s Hispanic Heritage Month,’ ‘It’s Black Lives Matter.’ We don’t need all of this,” she said. “What we need is real action. We need you to stop over-policing black and brown communities.

Constables Daisy Mazariegos and Brandon Nail, who were involved in the incident, are on paid administrative leave while a city-mandated outside investigator conducts an investigation.

The investigation will determine whether or not the officers and supervisors involved “followed” department policies, City Attorney Rob Epstein said. Disciplinary action, including possible dismissal, will be decided at the end of this report, Epstein said.

“The safety of our community is our priority,” Frugoli said in a prepared statement. “It is my office’s obligation to hold people accountable if crimes are committed, and we take that obligation seriously.”

Protests erupted downtown over the weekend after video of the encounter, first reported by ABC7 News, emerged.

The conflict occurred while the man was drinking beer with associates in the canal area. The video shows Mazariegos and Nail approaching a group on Windward Way around 7 p.m. on July 27.

Some initial police interrogations quickly turned into a violent encounter, according to police body camera footage.

At least two police officers grabbed the man and dropped him in the street. By the end of the scrum, blood was running down the man’s face and had pooled on the sidewalk.

He was sent to the hospital for treatment, then incarcerated in the Marin County Jail on suspicion of resisting an officer. After reviewing footage from the officers’ body cameras, prosecutors decided not to press charges. They were dropped on August 26, according to court records.

Charles Dresow, a lawyer representing the man, said his client had a broken nose and a concussion. No complaints against the city or its police department were filed Wednesday.

Mayor Kate Colin opened the discussion on Tuesday, saying: “I know I speak for council when I say we are deeply saddened, distressed and concerned by the police incident.”

In addition to the investigation, she said officials will be working with community partners at Canal Alliance and the Marin Multicultural Center to “begin to rebuild trust with each other.”

Residents said these organizations do not represent the voice of the channel and those who live there are the ones who need to be brought to the table.

Resident Florencia Parada said she was a 2018 alumnus of the police department’s citizen academy. She said former police chief Diana Bishop, who retired in 2020, “showed leadership”, in building trust with the community.

“Show leadership,” she told the council.

Protesters held signs, one of which read: ‘You give me great experiences with the use of force, man’, quoting a remark captured by body camera footage of the incident.

“It was disgusting and heartbreaking to see this video,” said Saul Godinez, a friend of the arrested man.

“I want to see these officers fired,” he told the council. “I don’t want to see any recycling – that’s not going to help. You have to make an example of it. You have to show us that you are listening and not just nodding your head.

Locals said what happened that night was nothing new, and so far it had been swept under the rug.

Cindy Diaz was in tears as she told council about her 62-year-old father who was allegedly beaten by police six months ago for a similar open container situation.

“It hurt my heart to see my dad with scratches and bruises on his face, elbows and shoulders,” Diaz said, sobbing.

Council and Police Chief David Spiller sat in silence as the community took to the podium. Epstein said he ordered them not to comment publicly on the details of the incident to protect the integrity of the investigation.

“I can assure you that when the investigation is complete, the city will release all the information it is legally allowed to provide,” Epstein said.

Epstein said he was in communication with Dresow and his client said he would be willing to meet with police and city officials as part of a “justice-seeking process.”

Dresow said his client is exploring all options.

“The profound statements made during public comments indicate that what happened to my client did not happen in a vacuum,” Dresow said Wednesday. “The city needs to consider whether it wants its city protected and serviced by the police department rather than just patrolled.”