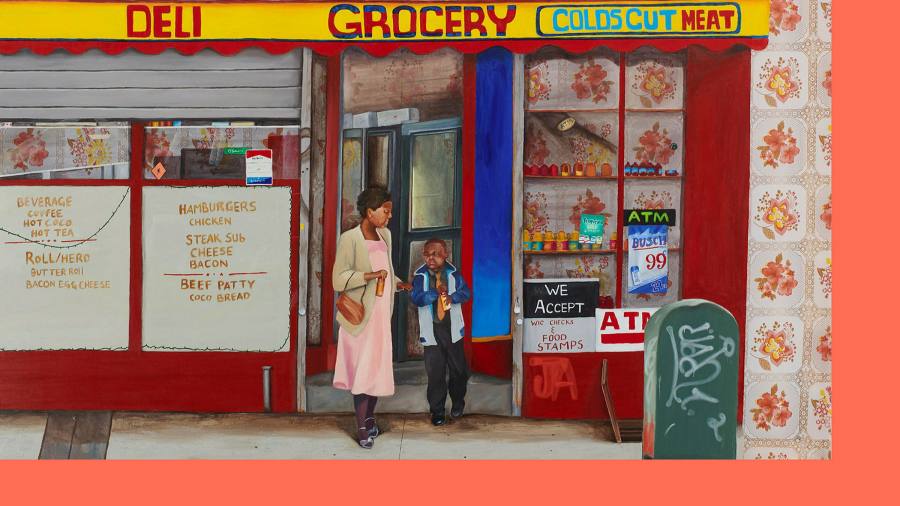 It seems like everywhere you look in New York, Latinx artists are making their mark. In April, El Museo del Barrio in East Harlem, established in 1969 as a neighborhood museum by and for the Puerto Rican community, opened a major retrospective dedicated to the work of its founder, Raphael Montañez Ortiz. Venture to the Brooklyn Museum and you’ll find a solo exhibit by Guadalupe Maravilla, who fled the civil war in El Salvador as a child and whose intriguing sculptures and sound art channel healing. At the Whitney Biennial, the works of Coco Fusco and Guadalupe Rosales – to name just two Latinx artists in the exhibition – resonate with poignant immediacy.

They also have an impact on the commercial side of the city. In Frieze New York, François Ghebaly will exhibit a painting by Danielle De Jesus depicting the popular inhabitants of his native Bushwick in Brooklyn, rendered through the prism of his experience as a Puerto Rican in the diaspora. It is a monument to the inhabitants of a community fragmented by gentrification and displacement.

De Jesus’ work will be one of many featured at the fair by artists who identify as Latinx — a gender-neutral term for people of Latino descent who live in the United States. Alexander Gray Associates will present work by Bronx-based Ecuadorian artist Ronny Quevedo, whose visual language blends cartography and pre-Columbian references in meditations on labor and heritage; The Galeria Luisa Strina presents the work of Clarissa Tossin, who grew up in Brazil and lives in Los Angeles.

To rave about the ubiquitous presence of Latinx artists in the New York art world as a phenomenon risks obscuring the truth that they have always been there – and too often sidelined, subsumed under the broader label “Latin American art” or defined solely by identity, not aesthetic, social and intellectual interests. But now they are beginning to move beyond those narrow confines into a place of importance.

“I wish we could finally decouple Latinx art from Latin American art as the only rubric to address these artists,” says researcher Arlene Dávila, a leading voice in advocacy for autonomy and the visibility of Latinx artists. “Latinx art has historically been marginalized and the only way to address the disinvestment of these artists is to stop aligning them with a more recognized category in museums, and for the art scholarship to focus on Latinx with specificity. “

Collectors such as Patricia Phelps de Cisneros and Estrellita Brodsky have done much to propel Latin American art onto the world stage, but patronage of Latinx artists on such a scale has been relatively rare, and as far as creators are concerned natives and Afro-Latins, the gap is flagrant. The contributions of the Chicano movement, for example, have been massively overlooked by mainstream institutions that have long favored art produced in Latin America, often perceived as more “authentic.” (The first museum in the United States dedicated to Mexican-American art, the Cheech Marin Center, is slated to open in Riverside, Calif., this summer.)

Another obstacle has been the dearth of Latinx individuals in positions of influence, including critics and journalists. This reflects a deeper, long-standing pattern of discrimination against Latinx people in the United States. The employment of curators dedicated to Latinx art in major museums is one way of filling the gaps. Since 2013, for example, the Whitney Museum of American Art has more than doubled its collection of works by Latinx artists, according to Marcela Guerrero, the museum’s first curator to specialize in this category. Scattered across the cultural landscape, she sees signs of growth – new gallery representation of artists such as Leslie Martinez by the Commonwealth and Council, for example; Eamon Ore-Giron’s first institutional survey, held at the Museum of Contemporary Art Denver; a $5 million commitment to support Latinx artists by the Ford and Mellon Foundations.

What these examples have in common, Guerrero says, “is that their understanding and interpretation of these themes and artists is not one-dimensional, based solely on whether something can be categorized as ‘Latinx’ or not.” Rather, this label comes to represent a more sophisticated “intersectional reading” of how the artist’s identity and the themes of his art interact.

In fact, many Latinx artists aren’t necessarily promoted or contextualized as such — partly because, as Dávila puts it, “Latinx art is American art.” At auction, says Anna Di Stasi, head of Latin American art at Sotheby’s, collectors are less interested in specific regions than in “how the work relates to their own experience”. And while the art world loves markers of identity, “Latinx” is both expansive and slippery a term, making it difficult to pinpoint the record breaking price for a Latinx artist. Jean-Michel Basquiat, whose record stands at $110 million, is generally described as a black American, despite his mother being Puerto Rican and his father Haitian.

Claiming Latinx artists in the canon is not simply about diversifying the narrative of art history, but about unraveling tightly coiled conceptions of what that art can be. Beatriz López, who co-founded the Instituto de Visión (Bogotá/New York) with a focus on neglected conceptual artists, recalls feeling like an outsider when she attended her first major art fair in 2012. But at Art Basel Miami Beach last year, when she showed work by LA-based Colombian artist Carolina Caycedo, something had changed.

“After so many years of resisting exhibiting pieces committed to ecological or social issues instead of pandering to the market, I realized that fairs in general had taken on this tone,” López explains. “I didn’t have to adapt my vision. The questions that preoccupied Latin artists, heirs to a colonial tradition and an imposed modernity, are today urgent questions on a global scale.

Take the case of Camilo Godoy, “a queer, brown, Colombian artist, based in New York”, explains Alexandra Morris, co-founder of the Proxyco gallery. “He remembers that a few years ago neither museums nor granting institutions paid attention to his highly sexualized photographs.” But over time, as institutions have been forced to adopt social and political practices in order to remain relevant, “New York museums have become more interested in multiple Latinx/LatAm perspectives.”

However, it is difficult to quantify progress without a centralized effort to track institutional acquisitions of Latinx art nationally. The meager assessments available paint a picture of incremental progress: a 2021 report by the American Alliance of Museums found that Latinx individuals are “grossly underrepresented in museum collections, exhibits, staff, and boards,” despite making up nearly one-fifth of the population of the country.

Speaking of De Jesus, the first artist to join Nicole Calderón’s eponymous gallery for Latin and Latin American art, Calderón describes his “meteoric rise”, with a painting acquired by the Pérez Art Museum in Miami and a new body of work. works scheduled to continue viewing at MoMA PS1 this summer. But overall, she says, interest in Latinx artists is “barely scratching the surface.”