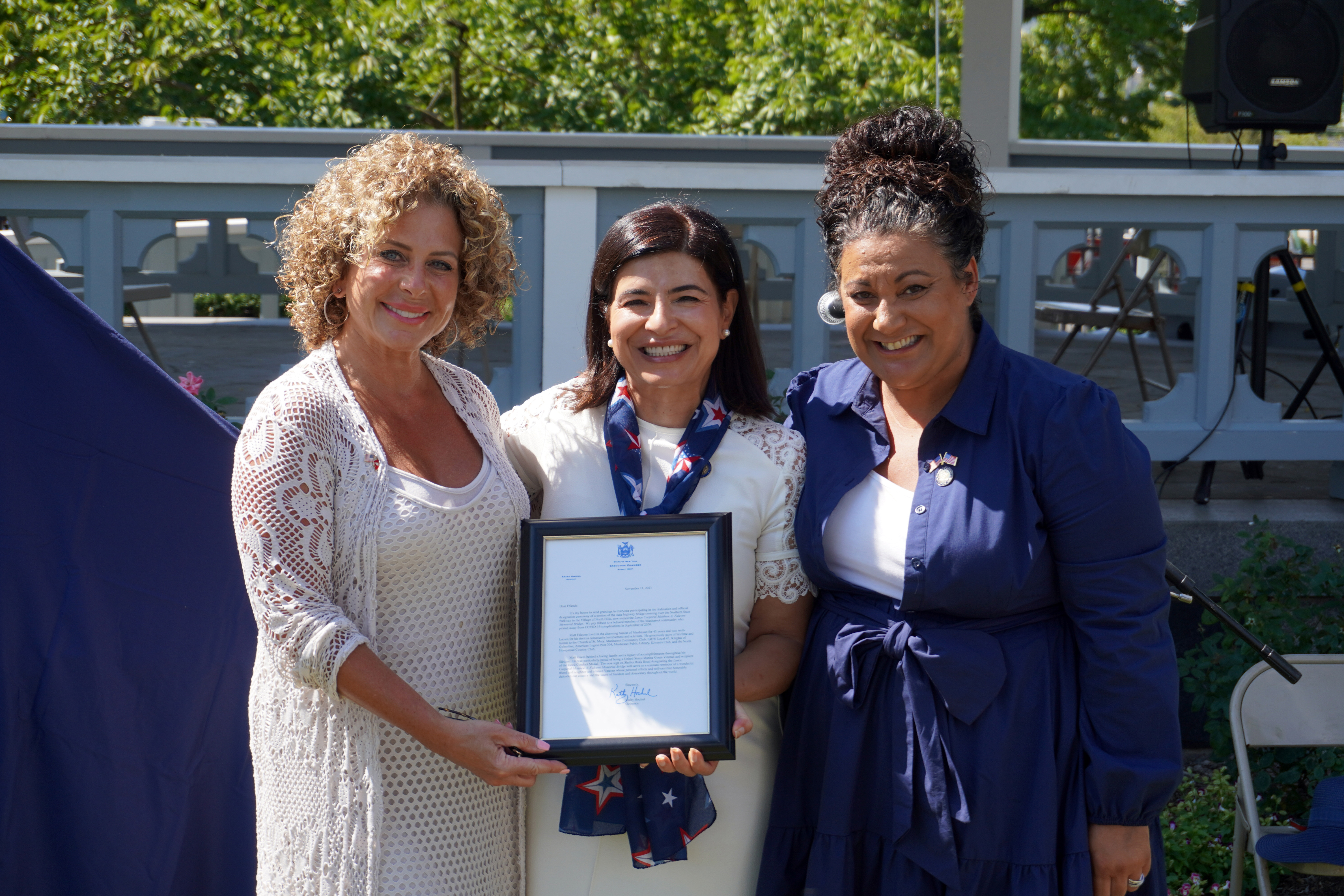 To download Full resolution images of the event by clicking here.

Lance Corporal Falcone was affectionately known as “Mr. Manhasset” to the many who knew him, having dedicated much of his life to local civic engagement in addition to his dedicated service to our nation in the armed forces. A tireless advocate for the veterans community, Lance Corporal Falcone was a past president of the Marine Corps League, a member of the Veterans Advisory Committee for the City of North Hempstead, as well as a past president of the American Legion Post. 304 in Manhasset. An active civic leader, he has held leadership positions and donated his time and talents to organizations such as Saint Mary’s Church, Manhasset Community Club, IBEW Local 3, Knights of Columbus, Manhasset Public Library, Kiwanis Club and the North. Hempstead Country Club. The “Lance Corporal Matthew A. Falcone Memorial Bridge” will honor the lasting legacy of this incredibly deserving individual in a place where thousands of people travel every day.

Senator Anna M. Kaplan said: “Matt Falcone was an extraordinarily special person whose generosity of spirit was a constant source of inspiration to me and so many others. I will always remember Matt not only for his dedication to his country, fellow veterans, family and community, but also for his big heart and his inability to say no when someone needed help. He was a true giant in our community, and I am honored to share his legacy with everyone by dedicating this bridge in his name that so many of us cross every day.

Assemblywoman Gina L. Sillitti said: “Today the community of Manhasset came together to celebrate the life of Matthew Falcone and dedicate the Shelter Rock Road Bridge in his honor. I am so happy that we were able to join his family, friends and community in celebrating his legacy and the impact he had on all of us. A veteran, civic leader and community activist. Mr. Falcone was affectionately known as Mr. Manhasset. His community service and accomplishments, as well as his dedication today, are a testament to all that he has done for our community and our country.

The event, which was attended by approximately 200 local residents, friends and family of Lance Corporal Falcone, was a fitting tribute to a man who was so loved by the community of Manhasset and beyond. The Manhasset High School String Quartet played a beautiful musical ensemble as the guests arrived. American Legion Post 304 conducted the presentation of colors and Post Commander John Iacono conducted the Pledge of Allegiance. Reagan Stone performed a moving rendition of the Stars and Stripes, and Father Dominik Wegiel of St. Mary’s Roman Catholic Church led a moving invocation. The event included remarks from Senator Anna Kaplan, Assemblywoman Gina Sillitti, City Supervisor Jennifer DeSena, USMC veteran Bruce Marsanico and Corporal Falcone’s daughter Denise Cestone. As a memorial panel replicating those now adorning the Falcone Bridge was revealed to the crowd, the Nassau County Fire Department Pipes and Drums played a moving rendition of Amazing Grace, as a massive flag adorned the sky. above courtesy of the Manhasset Lakeville Fire Department.

After the event, Corporal Falcone’s family joined Senator Kaplan in unveiling the signage on the Falcone Bridge itself, which spans the Northern State Parkway in North Hills and carries Shelter Rock Road, a gateway to the community of Manhasset.

Senator Kaplan added “I wanted to find a way to honor Matty that was larger than life, because Matty was a larger than life guy. I thought a bridge would be an appropriate way to acknowledge him, but most importantly, the bridges bring communities together, and that’s what Matty wanted.”

“Matthew Falcone was an institution in Manhasset, earning him the affectionate nickname ‘Mr. Manhaset.’ I have always known Matt as a man dedicated to family, community and service, both to his country during his time in the Marine Corps and to those in need he encountered in life” , Jennifer DeSena, Town Supervisor of North Hempstead said. “I will always be grateful for his wisdom, advice and generosity which helped me establish the Society of Saint Vincent de Paul. This posthumous dedication in his honor is a well-deserved tribute to his lasting legacy.

Veronica Lurvey, Member of North Hempstead Town Council said: “Matt Falcone was a dedicated member of the community who served our country and our community faithfully throughout his life. I first met Matt through the American Legion Post 304, the Kiwanis Club, and the Towns Veterans Advisory Committee, and had the privilege of calling him a friend. He loved his friends, his fellow veterans and his county. Above all, he loved and was so proud of his family. We miss him and are privileged to honor him in this way.