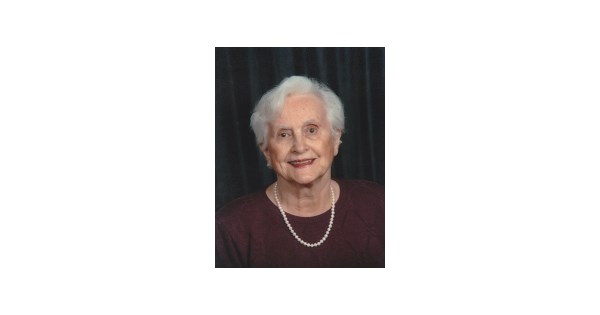 Patricia Jean (Hiser) Miesle, 96, of Bowling Green, passed away peacefully on Tuesday, February 8, 2022 at the Story Point Retirement Community in Waterville. She was born in Bradner, Ohio to the late Claude & Helen (Ostrander) Hiser. Pat married Frank Leland Miesle on June 19, 1948 at Bradner United Methodist Church; and he casually predeceased her on December 8, 2018. They had three daughters, Paula Kay (Miesle) May (David May), Julia Lynne (Miesle) Grossman (Edward Grossman) and Laura Gaye (Miesle) Grabowski (Thomas Grabowski ) . Pat graduated from Bradner High School in 1943, where she played on the girls’ basketball team, was a cheerleader, served as the band’s drum major, and was valedictorian. She worked at the Camp Post Exchange at Rossford Ordinance Depot during World War II.
After the war, Pat attended Bowling Green State University, majoring in educational theater and earning certification to teach high school English, speech, acting, and business (secretarial) classes. While in college, she was a member of Zeta Rho Tau, Theta Alpha Phi (Honorary Theater), Kappa Delta Pi (Honorary Education), and a founding member of the local Delta Zeta sorority chapter. She appeared and took part in many theatrical productions, and was involved in costumes and makeup for many years after graduating from college. She completed two years of postgraduate work, leaving college after her marriage in 1948.
In addition to helping with theater productions and being a stay-at-home mom at the Huron Playhouse Men’s Cottage for many years, Pat has served as a counselor for the Delta Zeta Sorority, served as a brownie chef and Girl Scouts for 15, delivered meals on wheels, and was a longtime member of the United Methodist Church of Bowling Green, where she was responsible for many Sunday School contests.
Shortly before her husband’s retirement from BGSU in 1981, Pat and Lee moved from their historic historic home at the corner of S. Church and Pearl streets in Bowling Green to a new home they had built on seven acres of the Pat’s family farm in Bradner, Ohio. . They lived there for the next 20 years, tending to an old apple orchard, tending to a large mixed garden and guarding nearly five acres of open land. Pat was very active in Bradner United Methodist Church, where she served as treasurer, church historian, president of United Methodist Women, taught Sunday School, and made many banners for the sanctuary. His five granddaughters loved to visit the park-like Bradner Farm. When acreage maintenance, along with the 13-mile drive to the grocery store and all other services, became onerous, Lee and Pat sold the Bradner house and moved back to Bowling Green.
Pat is survived by his three children Paula Kay (Miesle) May (David May), Julia Lynne (Miesle) Grossman (Edward Grossman) and Laura Gaye (Miesle) Grabowski (Thomas Grabowski); and grandchildren, Charlotte May, Jessica May, Caitlin (Grabowski) Schulte (Colton Schulte), Miranda Grabowski and Sophie Grossman. She was predeceased by her husband F. Lee Miesle; parents, Hélène & Claude; and siblings, Jack, Betty, Robert, Paul, Ruth, Beverly and Paula.
A Celebration of Life memorial service will be held at a later date. Memorial donations may be directed to the F. Lee and Patricia H. Miesle Fund at BGSU, or to Bradner United Methodist Church. All arrangements have been entrusted to Barndt Funeral Home in Wayne, Ohio. Online condolences can be sent to Pat’s family at www.barndtfuneralhome.org.
To send flowers to the family or plant a tree in memory of Patricia Jean Miesle, please visit our Tribute Shop.

How police can work with religious communities to improve security