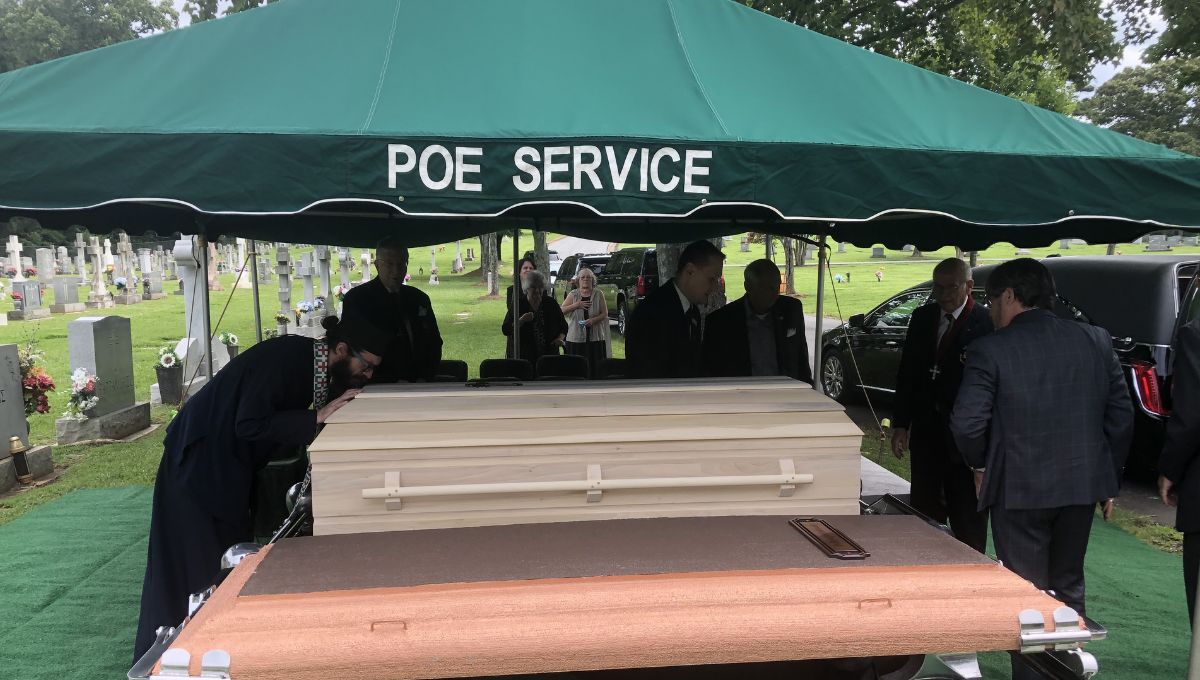 Father Jonathan Resmini kisses the casket during the reburial of Father Polycarpos Krithinakis at Evergreen Cemetery in Charlotte.

On its 100th anniversary, Holy Trinity Greek Orthodox Cathedral moves the bones of its first priest to Charlotte

Posted in The Charlotte Ledger on August 2, 2022

His connection to Charlotte dates back almost a century, when he was the first full-time priest assigned to the Holy Trinity Greek Orthodox Cathedral. The story we’re about to tell is how his journey brought him back to Charlotte — specifically Evergreen Cemetery — one July morning all these years later.

Father P, as we will respectfully call him for the sake of simplicity, was born in 1882 on the Greek island of Crete. In 1915, at age 33, less than a month after being ordained, he sailed for America aboard the SS Patri. It was known as an immigrant ship for obvious reasons.

He devoted his short life to serving as a priest in the Greek Orthodox Church. Records from a century ago are hard to come by. Here’s what we found. During his 23 years in our country, Father P led 10 parishes in seven states. His stops included Syracuse, NY; Akron, Ohio; Canton, Ohio; Charlotte, Akron again, Detroit and finally Minot, ND

Charlotte and Minot are the two essential stages in this story.

Holy Trinity Greek Orthodox Cathedral in Charlotte was founded in 1923. Father P was the first full-time priest assigned to the parish, serving from 1926-28. The hope was that his arrival might spark the construction of the first building of the congregation. Parishioners first met at the downtown Chamber of Commerce office. But for reasons lost in time, he wasn’t in Charlotte long enough for that to happen. In 1928, he was assigned a second time to the parish of Akron, then to another in Detroit.

In 1937, he was transferred to the Greek Orthodox parish of Minot. The city, which had a population of less than 20,000 at the time, attracted Greek immigrants to help build and maintain the Great Northern Railway that linked Minneapolis to Seattle. The parish needed a leader. Alas, Father P had to resign due to poor health. Fifteen months after his arrival in Minot, he died on August 10, 1938. He was 56 years old.

Father P was buried at Rosehill Memorial Park in Minot. Perhaps because English is the parishioners’ second language, the headstone identifies him as a GREEK PREIST.

Vivian Maragos Zimmerman has spent her entire life in Minot, worshiping at the Greek Orthodox parish. His father emigrated to America from his Greek village in the 1920s. Laying railroad tracks, he worked his way west. For reasons lost in time, he got as far as Minot and stopped. She was too young to have known Father P. But she has vivid childhood memories of her mother taking her to Rosehill to visit relatives’ graves. There, they took a few moments to stop at the tomb of Father P.

“My mother always had a feeling of sadness when she stood by her monument,” Vivian recalled. “She said he was a kind and good man, sensitive to people, but he seemed depressed.”

She long wondered if her depression stemmed from her posting to what was then a small north-central town in a cold and desolate state. Could this have contributed to his untimely death? “Nowadays,” Vivian said, “it would be characterized by him not eating and kind of passing out.”

Dead and buried, you’d guess the story ends there.

Holy Trinity Greek Orthodox Church celebrates its 100th anniversary in 2023. It has grown into a thriving religious community with 1,100 families, its East Boulevard campus a Charlotte landmark. For those who still can’t place it, Holy Trinity is home to the Yiasou Greek Festival which welcomes thousands of people for food and all things Greek. This year’s festival will take place from September 8 to 11.

To build excitement for the centenary, Holy Trinity organizes monthly events to mark the occasion. Between Father P.

“What better way to celebrate an anniversary than to bring our first priest home, where he can be cared for and not forgotten,” said Father Jonathan Resmini, spiritual leader of Holy Trinity.

The idea was inspired. Now to run it.

The Holy Trinity obtained permission from the Greek Orthodox Archdiocese of America to dig up Father P and rebury him in Charlotte. Exhumation is the process by which a body is legally exhumed from its “final” resting place. Here, there is a large Greek Orthodox community to watch over Father P. There, in Minot, there is not much left of the parish. While the city is now home to nearly 50,000 people, the original Greek Orthodox parish has closed. A new parish has 30 members. That’s not a lot, but at least enough to run a food truck selling gyros at the North Dakota State Fair held every July in Minot.

Virginia was at the cemetery on July 11 for the exhumation, although she chose to leave before she could see what was left of Father P.

Working for four hours in the summer heat, not knowing what they would find, cemetery workers dug down to the wooden coffin, eight feet instead of the typical six. The dirt was wet. First they used a backhoe, then shovels so as not to damage what was left. Eighty-four years after Father P’s burial, they have arrived at their destination. They found his skeleton intact, including the skull, jaw and legs. There was more: they recovered the rubber sole of a shoe and pieces of his cloth garment, green with gold trim.

“I was filled with amazement and awe,” said funeral director Andrew Bahanovich of Charlotte, who led the effort with Minot funeral director Ben Slind. “Being Orthodox and the son of a priest, it was very personal for me, a once in a lifetime experience.” Andrew works with Kenneth W. Poe Funeral & Cremation Service, which handles many Greek funerals in Charlotte.

The remains were brought back to a wooden board that was apparently part of the bottom of the coffin. It was placed in a plastic-lined metal container and flown to Charlotte by Delta Air Lines.

Father P arrived on July 22. Four days later, 40 Holy Trinity parishioners offered an official welcome home during a brief service in the sanctuary. Father Remini told the assembly that even as time passes, we remain bound by the relationships we forged long ago. This includes the priest who was there at the beginning of the journey of the Holy Trinity.

The motorcade to Evergreen Cemetery off Central Avenue took 30 minutes. Father P was buried in a simple poplar coffin.

Vivian, who visited Father P’s grave as a little girl, wished she could come to Charlotte for her second funeral. When Father P was presumably last buried, she was cooking spinach and cheese triangles to sell in the parish food truck at the State Fair.

“Having been to his grave so many times,” Vivian said, “I wish I was there for the final chapter.”

Ken Garfield is a freelance writer/writer specializing in obituaries. Join it at [email protected].