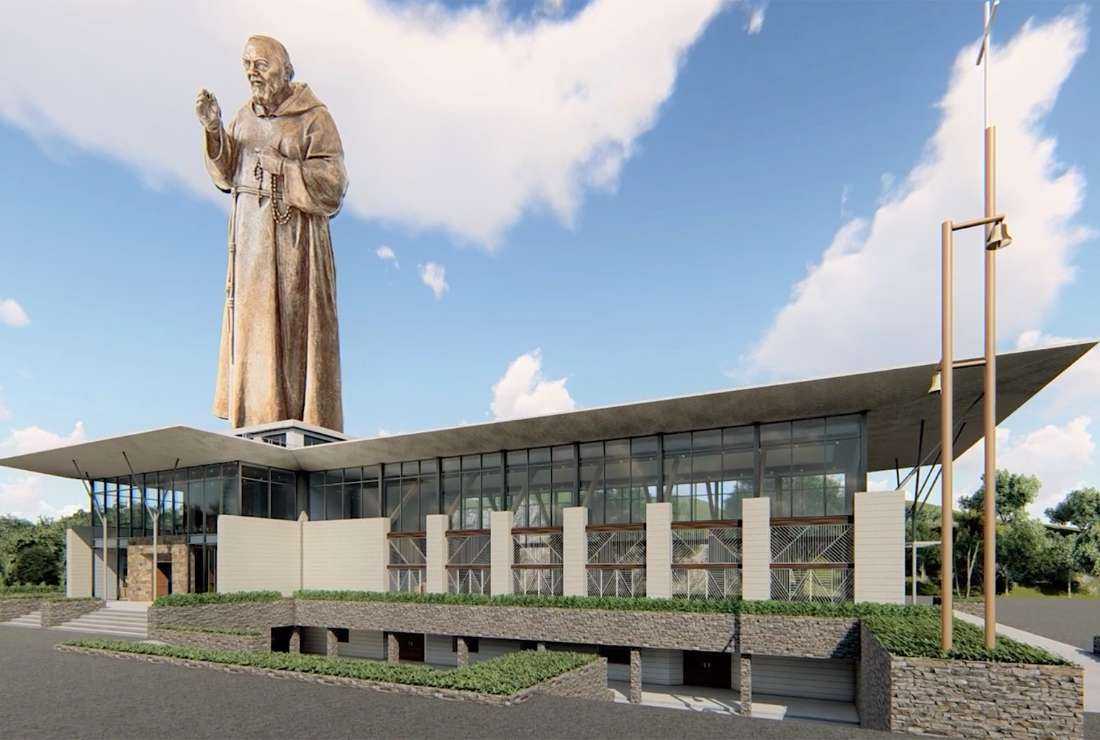 The proposed Padre Pio shrine in Cebu in the central Visayas region of the Philippines. (Picture: YouTube/CBCP News)

The Archdiocese of Cebu in the Philippines has begun construction of a 100-foot-tall statue of Padre Pio at a shrine dedicated to the popular Italian saint.

Archbishop Jose Palma of Cebu led the dedication ceremony of the shrine with the Contemplative Community of Padre Pio, a group of consecrated Catholic lay people in Cebu, on September 17.

Titled Santuario di Padre Pio in the village of Pulangbato, the shrine is being built on a hill overlooking the entire city of Cebu, says a report on the website of the Catholic Bishops’ Conference of the Philippines (CBCP).

The contemplative group, which promotes devotion to the saint in the country, said the choice of location was symbolic.

“It is symbolic that the shrine is the tallest church located on the island that welcomed the first missionaries 500 years ago,” Joey Cagasero, a devotee of Padre Pio from Cebu, told UCA News.

Christianity in the Philippines arrived in 1521 when Portuguese explorer Ferdinand Magellan and his companions landed on the island in the Central Visayas region.

“We hope that millions, if not thousands of Padre Pio devotees will visit this place”

Cebu natives are believed to be the first group of baptized Filipinos.

Magellan planted a cross and gave an image of the Christ Child (better known as Santo Nino) to Hara Amihan, the island chief’s wife.

The cross and the image of the Infant Jesus have been preserved on the island, attracting over a million worshipers a year.

The archdiocese said construction of the shrine will be completed next year with the aim of making it a center of healing not just in the region but across the country.

“There would be healing masses and confessions here. This is our goal. We hope millions if not thousands of Padre Pio devotees will visit this place,” Cagasero added.

Cebu Archbishop Jose Palma said his dream was for the shrine to unite families, especially since devotion to Padre Pio should bring every family closer to Christ.

“I hope the center will bring peace to every family”

“The world around us is in crisis and many forces are working to destroy the Christian family. There are those who work to redefine marriage and in doing so redefine the family according to their whims and desires…I hope the center will bring peace to every family,” Bishop Palma said during the ceremony. inauguration, referring to a divorce. bill introduced in the Philippine parliament

“May Padre Pio inspire every Filipino to protect every family and raise every child according to the teachings of the Gospel,” the Prelate added.

Filipinos pray to Padre Pio for sick family members as well as safe journeys. Some couples have testified that their request to have a child was interceded by the Italian saint.

Devotees testified how their petitions were answered.

“We prayed for our then 8-month-old daughter to recover. She was very ill with pneumonia at that time. Doctors said there was little chance she would survive. We prayed to Padre Pio and she succeeded,” devotee Jason Israel told UCA News.

In 2018, the Italian brothers who brought Padre Pio’s relic heart to the Philippines were amazed to see how thousands of people lined up to touch it.

Francesco Forgione, better known as Padre Pio or Saint Pius of Pietrelcina (1887-1968) was a Capuchin Franciscan priest and mystic known for his piety and charity.

He was famous for displaying his stigmata, the marks of bodily wounds, scars and pain corresponding to the wounds of the crucifixion of Jesus Christ.