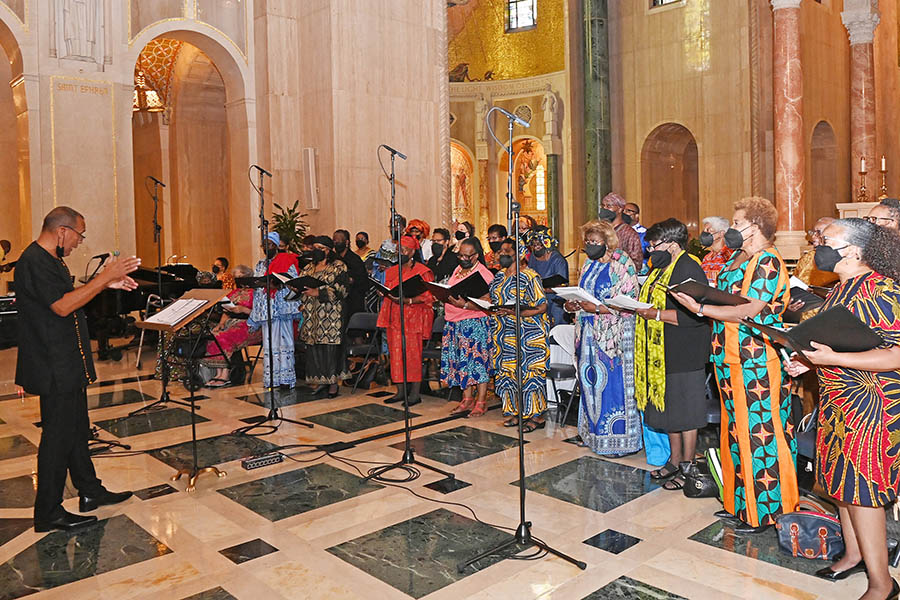 WASHINGTON (CNS) — As he lays his hands on sculptures he made 25 years ago, Ed Dwight told visitors to Our Mother of Africa Chapel what inspired his art.

Dwight, along with other artists and community members, were honored at the chapel on his 25th birthday at the National Shrine Basilica of the Immaculate Conception in Washington on September 17.

The National Congress of Black Catholics hosted the celebration of the pilgrimage. The NBCC is an organization that represents approximately 3 million African American Catholics to meet their spiritual needs within the church.

The chapel was a gift to the National Shrine on behalf of Congress. It recalls the history of slavery in the United States and gives a sense of hope.

Dwight shared his method of using bronze and casting faces when sculpting. The artist also spoke about how his work was influenced by his Catholic faith and his mother, who made sure he attended church and Catholic school while he was growing up in Kansas City. , Kansas.

Using imagery from the church and the people he grew up with made it easier to create sculptures for the chapel, he said.

“It was a totally natural setting for me, and it’s one of the few sculptures I’ve ever done where it felt more natural to do it,” said Dwight, now 89. He has produced approximately 130 large-scale public and commemorative art installations. , and over 18,000 gallery sculptures.

In addition to the visiting priests, the concelebrants included Bishop Christophe Pierre, Apostolic Nuncio to the United States, and Bishop John H. Ricard, retired bishop of Pensacola-Tallahassee, Florida, who was president of the NBCC during the construction of the Chapel.

The Chapel of Our Mother of Africa is “a very sacred and holy place,” Archbishop Ricard said in his homily. “Inside this sacred space…there is a silent conversation, an ongoing sacred conversation” between the visitor and the artwork, he said.

Pilgrims from across the country attended the celebration — the first of several events scheduled ahead of the XIII NBCC Convention July 20-23 in National Harbor, Maryland.

Father Desmond Drummer, pastor of Most Blessed Sacrament Church in Atlanta, and Nathalie Borgella, a member of the Atlanta Haitian Chaplaincy at Sts. The Peter and Paul Church of Decatur, Georgia traveled to the nation’s capital for the celebration.

How Dwight allowed his life experience to influence his work impacted Borgella.

“It shows the importance of understanding our history, not just as black Catholics, but as individuals in general,” she said.

The National Shrine Basilica of the Immaculate Conception is the largest Catholic church in North America and one of the 10 largest churches in the world.

It is designated a National Shrine of Prayer and Pilgrimage by the U.S. Catholic Bishops and is home to more than 80 chapels that honor Mary and represent the peoples, cultures, and traditions of the Catholic faith.

Learning the backstory of Our Mother of Africa Chapel showed how African-American history is present at the basilica — the “spiritual home of the church in the United States,” Father Drummer said.

“This Catholic community in the United States is a worldwide Catholic community,” he told the Georgia Bulletin, the archdiocesan newspaper of Atlanta. “There is not just one story, there are many. And those stories include encounters with the Lord.

The chapel includes a bronze sculpture of Mary holding the Christ Child. Sculpted by Dwight, both were given African-American physical characteristics.

“I was not the master or the control of the image,” Dwight said of creating the piece. “All that drapery and the way she looked with her hands; all of her, everything just spat out. And I couldn’t stop him from being what he is today.

Dwight’s second work, “Sculpture in Relief”, depicts African American history from slavery to the present day. He describes it as his version of the civil rights movement.

The artist said what he learned about the civil rights movement and life experience was reflected in the sculpture.

The crucifix in the Chapel of Our Mother of Africa was created through the collaboration of Tanzanian sculptor Juvenal Kaliki, who sculpted the figure of Christ, and New York sculptor Jeffrey Brosk, who designed the cross.

The marble sculptures of Matthew, Mark, Luke and John were sculpted by Giancarlo Biagi and Jill Burkee. The iron grilles along the altar are by Jean Wiart. The doors represent the acacia tree, an icon for black Catholics in the United States.

Father Robert Boxie III, the Catholic chaplain at Howard University in Washington, brought a group of students to the basilica for the anniversary celebration.

He hopes students will know that “the gifts they bring into their presence will be recognized and celebrated” by the church.

The CCNB held its first convention in 1889. With the exception of the coronavirus pandemic, it has held a convention every five years since 1987 to prepare a pastoral plan to meet the needs of black Catholics.

The theme for the 2023 conference is: “Writing the Vision: A Prophetic Call to Prosper”.

In preparation for next year’s convention, Father Drummer drew inspiration from the celebration of African Catholics at the basilica.

“It’s important for us to expand what we mean when we say black Catholic,” Father Drummer said. “Black Catholic life in the United States is a global reality that contains a number of stories, and our understanding of what it means to be a Black Catholic moving forward must include a pan-African vision.”

The XIII Congress will be a validation of voices and cultures, Borgella said.

Holding convention events near the national shrine, with chapels dedicated to different nations and regions, “shows that black Catholics are still an integral part of Catholic history,” she said.

Smith is an editor for the Georgia Bulletin, the newspaper of the Archdiocese of Atlanta.