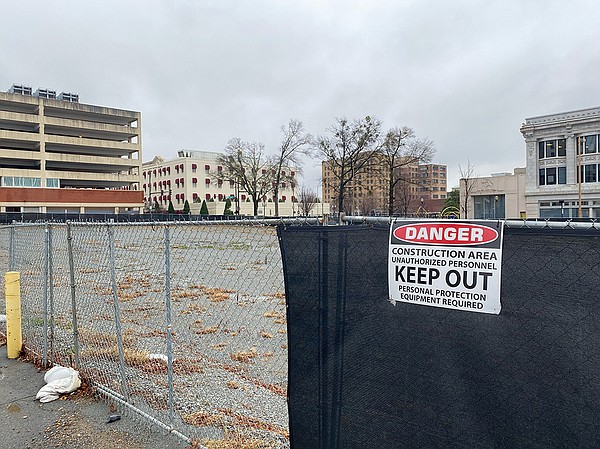 A proposal to allow the City of Little Rock to move forward with acquiring land on South Louisiana Street downtown to build a 600-space parking lot has failed to clear the Little Rock board of directors at a meeting Tuesday night.

The proposed parking lot would support the city’s convention center and provide public parking for other downtown activities, according to council documents.

The land Little Rock would acquire to build the structure is owned by a limited liability company affiliated with Stephens Inc., the town-based financial services company.

Pulaski County Assessor’s Office records show that six parcels on the half-block between West Third and West Second streets on one side of South Louisiana Street are owned by Second and Louisiana Properties, LLC.

According to the Arkansas Secretary of State’s Office, the manager of the LLC associated with the properties is Kathy Bryant, who is Chief Financial Officer of Stephens Capital Partners. The founder of the LLC is listed as Kevin Burns, Senior Vice President and General Counsel of Stephens Inc.

The Little Rock Planning Commission in 2019 approved the construction of a 100-space surface parking lot for Stephens employees, as well as tenants of the Stephens building, after the same LLC linked to the financial services company a purchased and then demolished four buildings that had stood on the block, the Arkansas Democrat-Gazette previously reported.

However, the proposed parking ultimately never materialized. Currently, the Louisiana Street lot is vacant and surrounded by fences.

The location is near the Stephens Building, located at 111 Center St., as well as the Little Rock Marriott and the Statehouse Convention Center, which is connected to the hotel.

On Tuesday’s city council agenda were two resolutions regarding the proposed parking lot.

A resolution sought to authorize the payment of preliminary design and construction tender costs associated with the parking deck from the general fund before issuing capital improvement revenue bonds and then repaying the General Fund Special Projects Account using bond proceeds.

The resolution failed to gain six votes among the 10 city administrators. The vote was 5 to 2, with three City Managers voting “present”.

Another resolution would have authorized partnerships with Crews and Associates, Inc. as underwriter and the law firm of Friday, Eldredge and Clark as bond counsel to prepare documents associated with the issuance of capital improvements and repayment of revenue bonds. The approximate principal amount was $24,535,000.

A separate resolution approved Tuesday authorizes the city to contract with the same law firm as the bond attorney on a proposed series of general capital improvement bonds. The resolution was adopted as part of the approval agenda.

Frank Thomas, a spokesman for Stephens, declined to comment Tuesday afternoon before the meeting in response to questions from the Arkansas Democrat-Gazette.

City Manager Bruce Moore, Chief Financial Officer Sara Lenehan and Gretchen Hall, the outgoing manager of the Little Rock Convention and Visitors Bureau, did not respond to emailed questions about the proposal ahead of the board meeting. of Tuesday.

Earlier this week, Moore told the Arkansas Times, “The main rationale is that our convention center hotel needs a parking deck. Stephens will only get the amount he paid for the land. and site preparation costs. No profit.”

Moore added that the Marriott would get “first call” on parking spaces and that Stephens would be a tenant on the bridge. He later said officials had been working with the visitors bureau “for years to develop a more viable parking situation for the hotel.”

Friday fish fries are starting to come back this Lent