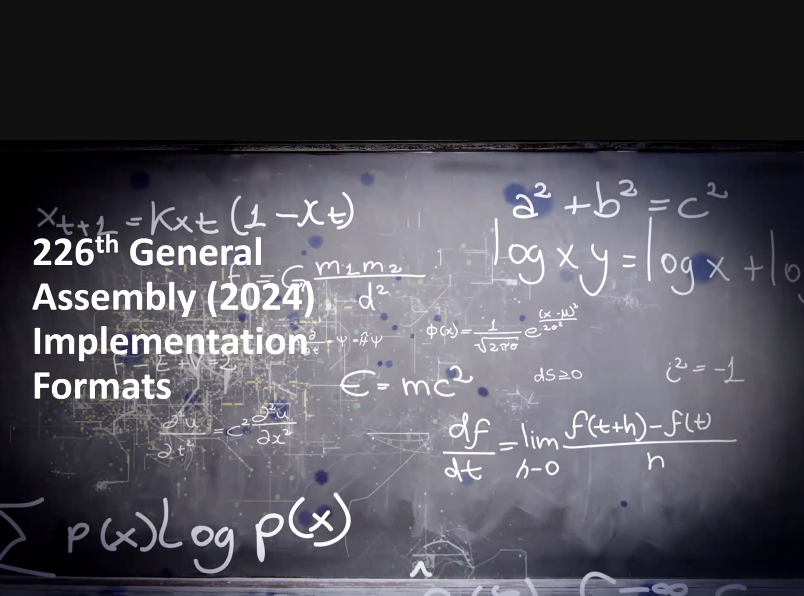 LOUISVILLE, Ky. – What we know (barring some new, unexpected global catastrophe): Plenary sessions of the 2024 General Assembly of The Presbyterian Church (USA) will be held in person in Salt Lake City, and committee meetings in line. This is what the General Assembly 2022 voted to do.

Now the General Assembly Bureau Committee (COGA) is considering some options for how to structure the assembly schedule – discuss possibilities, but not make decisions yet. “We are again, once again, reinventing the General Assembly,” said Kerry Rice, Deputy Clerk.

While two options were being discussed at COGA’s hybrid meeting Sept. 22, “we’re really not limited to just two,” said valerie izumi, a member of a team with Deb Davies and Kate Trigger Duffert of the Office of the General Assembly (OGA) which helps COGA to sort out the alternatives. “Feel free to imagine new ways and new possibilities.”

COGA considered two possibilities for the 2024 General Assembly as a starting point for discussion, with the following approximate timelines:

A few threads of conversation about these possibilities:

Diversity and Privilege: What are the implications for each possibility for whom voices are privileged, and who will find it harder to participate? Many pastors do not want to leave the pulpit on Sunday. Former people in power often have to burn personal vacations from work to be commissioner. Young Adult Advisory Delegates may have limited time to give. COGA member Miguel Rosa Morales cited low levels of YAADS attendance at this year’s meeting and said it was important “that we don’t sacrifice YAADS” with too long a commitment.

Schedule calculations aren’t straightforward, izumi pointed out – as some pastors are bi-professional with responsibilities throughout the week, and some people who work outside the church have jobs with night shifts. and weekends.

Travel time: Given the uncertainties of air travel these days, the schedule will require more than a day of travel time to get to the assembly. “Flights are just plain unpredictable,” said COGA host Eliana Maxim. “A minimum of two days is realistic.”

Committee meetings. Should all committees meet online at the same time or should there be two groups? What are the implications of these options for the costs, technology, staffing and support of these committees? What’s better – committees that meet for more hours on fewer days? Or shorter meetings for more days? “After about two hours on Zoom, people lose their effectiveness,” said COGA member Robin Pugh.

Based on all of this feedback, the staff team will refine the possibilities – and COGA will consider the matter again at its virtual meeting on October 20.

This hybrid COGA meeting will end on September 23. Here is more of the discussion from the second day of this meeting.

Open meeting policy. Rice said he expects there will be a PC review and overhaul fairly soon (USA) Open Meeting Policy. “It’s on our radar,” Rice said, without being more specific about the review process.

Evaluation of the General Assembly. In a evaluation after assembly conducted by PC Research Services (US), most participants (83%) said they were “satisfied” or “very satisfied” with the 2022 General Assembly overall, and almost 9 out of 10 agreed that the work of the assembly was meaningful overall. About 6 in 10 people described committee time as their most meaningful assembly experience, with 17% citing worship as the most meaningful. Three quarters (77%) said they would be willing to serve again.

Just under half (49%) said they worked full time (although this includes many ministers) and 29% were retired. When it comes to time off, 38% said they worked for the church in some way and didn’t need to use their vacation for congregation, while 12% said have taken paid leave and 8% have taken unpaid leave to participate.

Demographically, the assembly is biased:

Distracted driving. COGA discussed, but did not act, whether a anti-distracted driving policy which currently applies to employees of the Presbyterian Mission Agency and OGA, should also apply to members of the boards or committees of those agencies.

The gist of this policy, according to Mike Kirk, general counsel for the PC (USA), A Corporation: don’t engage in agency business while driving. This includes making phone calls or participating in virtual meetings. Kirk said he’s noticed “more and more people attending committee or board meetings” while driving – including attendees at last summer’s General Assembly.

“It’s a matter of risk management” — whether there could be liability for the naming in the event of an accident — as well as a matter of safety, Kirk said.

Another perspective: People should follow their state or local laws involving the use of cell phones while driving, but this policy could be even more restrictive. “It’s a dramatic difference from the number of us who operate in day-to-day life,” said COGA member Stephanie Anthony, who said she abides by the laws of her jurisdiction but that she made hands-free calls while driving. “There’s a lot of business that happens while driving,” Anthony said – and banning that could change the availability of people ready to serve.

Financial implications. DeAmber Clopton, Associate Director of Finance Administration at the OGA, presented the financial implications per capita for actions taken by the 2022 General Assembly. The per capita cost resulting from these actions: $532,100 for 2023-2024, including meeting costs for special committees created by the assembly (including to rewrite the rules and write a proposal for a new denomination), as well as for a special commission that will work to unify the national structure of the denomination.

Clopton also stated that “Overall, OGA is in a healthy position” financially at presentalthough costs will rise as vacancies are filled and more staff begin to travel again as COVID-19 restrictions ease.