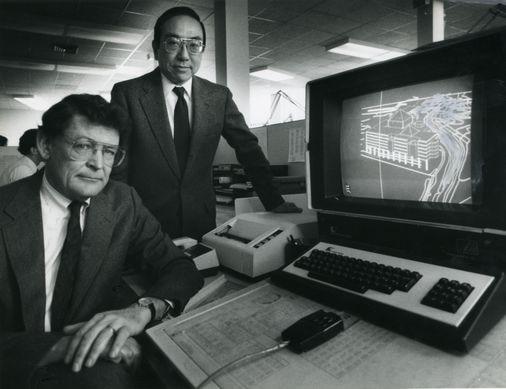 Mr Brannen, known as Buz, died in hospice care on July 29 pneumonia and congestive heart failure. He was 90 years old and had lived in Sudbury, after many years in Lincoln.

His company’s major projects in Greater Boston included One Financial Center, One Lincoln Street, and the Tufts University Student Center.

Jung / Brannen also changed horizons beyond Boston, with projects such as the building of the Poynter Institute for Media Studies in St. Petersburg, Fla., As the New England Regional Council of the American Institute of Architects awarded great honor for good design.

Mr. Brannen often worked on designs with the company’s co-founder, Yu Sing Jung, and the architect Robert hsiung, who was with their company.

With Post office square, the final design was “strongly influenced by the layouts of the various buildings in the area,” Brannen told The Globe in 1979.

While the building “had its own purpose”, he added, it was also designed “as a piece of urban sculpture to react with other buildings in the viewer’s field of vision.”

In a review, the Globe’s Campbell praised the project, which also included the Meridien Hotel.

“The lobby at One Post Office Square, compared to any other office building in Boston for decades, is a sultry feast. Streams of sunlight shine on the brass accents and bounce off walls which, surprisingly, are covered with a dozen kinds of richly colored marble, arranged in intricate geometric patterns, ”Campbell wrote.

“It’s the kind of old-fashioned embellishment we are always told no one can afford anymore,” he added. “How can that happen in this ordinary, speculative office building?” According to architects Buz Brannen and Yu Sing Jung, multi-colored marble did not cost more than, say, conventional travertine, thanks to new technologies developed in Italy. The One Post Office Square marble was precut and glued to support panels in Carrara, Italy, according to the architects’ designs, then shipped to Boston. In other words, it is prefabricated marble. It looks wonderful.

“Mr. Brannen’s goal was this vision, this master plan,” said Joe Mamayek, director of design firm SGA who had been recruited from outside the university to work for Jung / Brannen.

Mamayek recalled that “Mr. Brannen’s eye was always on construction strategies, looking at the end user in a single-tenant or multi-tenant building: ‘How do we get the best value for the developer and the customer? ‘ And then look at the opportunities for the architectural details.

Mr. Brannen was born in 1931 in Seattle and raised there, the younger of two siblings whose parents were Robert Brannen Sr. and Marie Wittwer Brannen.

Her nickname, Buz, was a holdover from her childhood, when her sister “called her her baby buzzer,” her daughter Sarah said.

Initially an engineering student at the University of Washington, Mr. Brannen interrupted his studies to join the Army Reserve and returned to earn a bachelor’s degree in architecture.

“I like to build things, to draw things,” he told the Boston Business Journal. “It seemed natural to me to become an architect.

After finishing his studies, he headed east.

“Boston was the center of the architectural universe at the time,” he said in the Journal interview. “For a young architect, it was a place to come and try your wings. “

In collaboration with Belluschi, Mr. Brannen helped design the Julliard School in New York. In the late 1960s, Mr. Brannen started his own business and then co-founded Jung / Brannen.

Mr. Brannen was a member of the College of Fellows at the American Institute of Architects. The Boston Society of Architects presented him with its Award of Honor in 1998.

In college, he met Barbara Straight through friends on a waterskiing trip. They married in 1956 and had two daughters, Sarah and Jennie, both of whom now live in Sudbury.

Mrs Brannen, deceased in 2017, was a home economics teacher who became an accomplished carpet weaver. She and her family have renovated an old farmhouse and barn near Lucca in the Tuscany region of Italy.

Mr. Brannen had been introduced to the area during a visit with Belluschi, with whom he had also helped design the Joseph Meyerhoff Symphony Hall in Baltimore.

“We worked in and around Lucca,” Mr. Brannen recalled in an interview with Architectural Digest, “and I came back, sometimes with Barbara and the girls.”

Friends in Italy showed the Brannens the farm and several acres of olive groves, which quickly became the family’s second home and design project.

Growing up in Seattle, Mr. Brannen “loved music and loved art and wanted to be an artist,” Sarah said. “He had the soul of an artist.

In addition to his two daughters, Mr. Brannen leaves behind his sister, Suzanne Pocock of Seattle, and two granddaughters.

At his request, no service will be held.

Mr. Brannen “was a very engaging person. His personality was really a gentleman and someone who listened intently to conversations, ”recalls Mamayek.

At work, Jung and Mr. Brannen focused “on family first, knowing everyone in the business, knowing the spouses, knowing the children,” Mamayek said. “It was very endearing and very important, and a lasting element that built the culture of the company.”

The work in a growing company was intense and often complex.

“We’ve developed a system that monitors every job, in the hundreds,” Brannen told The Globe in 1987. “It shows every hour of every job. I monitor each task, 50 to 100 tasks, once a week. I can say with great finesse where each project is and if there are any problems.

To escape the pressure, he headed for Maine, where “he loved to sail because when you’re sailing you can only really think of the boat and not hit a rock,” Sarah said.

In a way, sailing relied on skills similar to those he used on the job.

“I believe in creative problem solving,” he told the Boston Business Journal. “I have artistic thinking skills, but I get more excited when we cleverly solve a technical problem. “

Bryan Marquard can be reached at [email protected]