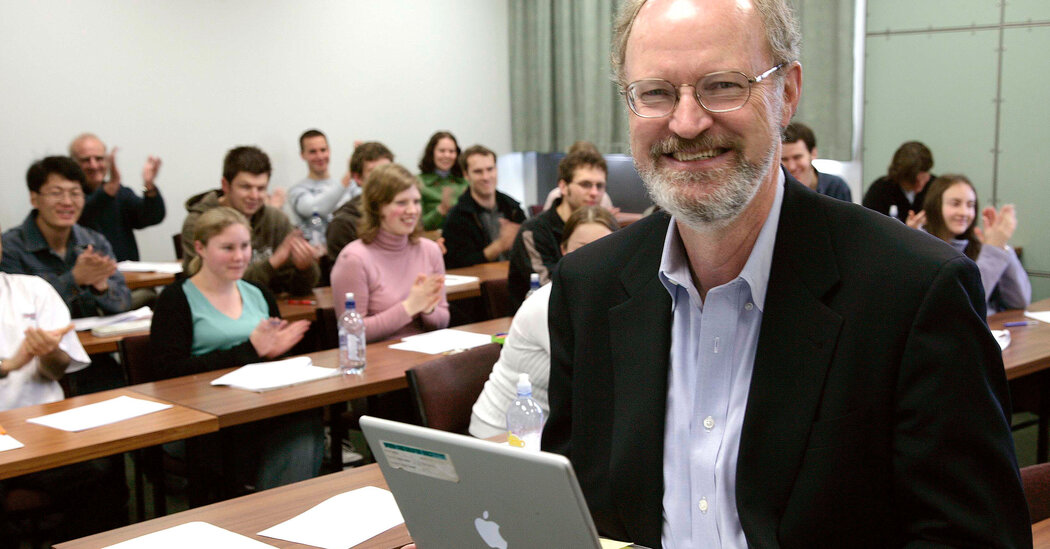 Robert H. Grubbs, 79, dies; His breakthrough in chemistry won him a Nobel Prize

Robert H. Grubbs, an American chemist who helped find a way to streamline the manufacture of compounds used in everything from plastics to pharmaceuticals so that they produce less hazardous waste – a breakthrough in “green chemistry” which won him a share of the Nobel Prize in 2005 – died Sunday in Duarte, California. He was 79 years old.

His son Barney said the cause was a heart attack, which Dr Grubbs suffered while being treated for lymphoma at the City of Hope Comprehensive Cancer Center.

The process that Dr. Grubbs helped perfect is called metathesis (pronounced meh-TATH-eh-sis), which means ‘changing places’. It allows molecules to break down and then reform into strong â€œdouble bondsâ€ of carbon atoms, creating new compounds.

Metathesis was first discovered and used in the 1950s, but how it worked remained a mystery until it was explained in 1971 by French chemist Yves Chauvin and one of his students, Jean-Louis HÃ©risson. .

They showed how a metal-carbon catalyst can combine with a fragment of a molecule to create a temporary bond, like two dancers joining their four hands. The newly created bond then finds another pair of similar molecules – the two dancers are connected by two others – forming a ring. The ring then breaks and the catalyst leaves with a molecular piece of the second pair, which rearranges its carbon bonds.

Metathesis is extremely efficient, but some of the early catalysts were difficult to use and could be unstable. In 1990, Richard H. Schrock, a professor at the Massachusetts Institute of Technology, made a breakthrough by developing catalysts based on the metals tungsten and molybdenum. The new catalysts were more efficient, but they still had flaws; in particular, they collapsed when exposed to air.

Working separately, Dr Grubbs, who had started his research on metathesis in the 1970s, proposed in 1992 catalysts using the metal ruthenium. His catalysts weren’t always as effective as Dr Schrock’s, but they were stable in air and more selective in the way they bind to molecular chains.

Dr Schrock said of Dr Grubbs’ work: â€œHe was the one who really took what I did and turned it into something practical. “

The remarkable thing about the metathesis was that it worked at all, Dr Grubbs said. â€œCarbon-carbon double bonds are usually one of the strongest points in the molecule,â€ he explained. â€œBeing able to tear them apart and put them back together really neatly came as a total surprise to organic chemists. “

The work of Dr Grubbs and Dr Schrock paved the way for metathesis to become a cornerstone of chemical manufacturing. The catalysts they developed, which bear their name, are widely used today in the manufacture of chemicals for a variety of manufacturing processes.

In addition to their other advantages, the new catalysts produced much less waste, especially hazardous. By announcing that Dr Grubbs, Dr Chauvin and Dr Schrock were going share the 2005 Nobel Prize in Chemistry, the Royal Swedish Academy of Sciences, which manages the awards, said: â€œThis represents a big step forward for ‘green chemistry’, reducing potentially hazardous waste through smarter production. “

Robert Howard Grubbs was born on February 27, 1942 on a farm in western Kentucky between Calvert City and Possum Trot. He was the second of three children of Howard and Faye Grubbs.

Robert’s maternal grandmother was well read and educated, and his mother became a teacher, working for over 35 years in small rural schools. She had obtained a teaching certificate when she was younger, but it took her 28 years to get her bachelor’s degree by taking evening and weekend classes, sometimes with Robert on her tail.

Dr Grubbs’ father was a mechanic who built the farm where his children were born. He worked for the Tennessee Valley Authority, operating and maintaining heavy equipment for dams in western Kentucky and Tennessee.

In one autobiographical sketch for the Nobel committee, Dr Grubbs wrote: â€œThe academic model of my mother and grandmother and the very practical mechanical training of my father turned out to be the perfect training for research in organic chemistry.

He majored in agricultural chemistry at the University of Florida, combining his interest in science, developed in college, and his childhood passion for agriculture.

One summer, while working in an animal nutrition lab to analyze steer droppings, he was invited by a friend to work in an organic chemistry lab run by a new faculty member at the university, Merle. Battiste. Around this time, Dr. Grubbs was absorbed by a book called â€œMechanisms and Structure in Organic Chemistryâ€ by ES Gould, which explained how chemical reactions work. His lab experience and the book, he says, persuaded him to devote himself to chemistry.

It was a lecture given at the university by Rowland Pettit, an Australian chemist, that inspired Dr Grubbs to start studying the use of metals in organic chemistry, an exploratory work that would lead to the Nobel Prize.

After earning his undergraduate and masters degrees from the University of Florida, he moved to Columbia University in New York for his doctorate, working under Ronald breslow. Dr Battiste had been Dr Breslow’s first doctorate. raised.

While in Columbia, Dr. Grubbs met and married Helen O’Kane, a speech therapist from Brooklyn.

He got his doctorate. in 1968, then worked for a year at Stanford University as a member of the National Institutes of Health. He joined the faculty of Michigan State University in 1969 and worked there until 1978. During this time, he began his research on catalysts in metathesis.

Dr Grubbs was hired by the California Institute of Technology in 1978 and worked there until his death, advising and mentoring over 100 doctoral students. candidates and nearly 200 postdoctoral associates over the years.

In 1998, he and a postdoctoral fellow in chemistry, Mike Giardello, founded Materia, a Pasadena-based tech company that owns the exclusive rights to manufacture Dr Grubbs’ catalysts. The company was sold in 2017 to Umicore and ExxonMobil this year.

Besides his wife and son Barney, he is survived by another son, Brendan; one daughter, Kathleen; two sisters, Marie Maines and Bonnie Berry; and four grandchildren.

As Dr Grubbs wrote in his autobiographical sketch, his path to the Nobel was marked when he was a child.

â€œAs a child, I was always interested in building things,â€ he recalls. “Instead of buying candy, I would buy nails, which I used to build things from scraps of wood.”

Sometimes he would help his father rebuild car engines, install plumbing, and build homes on farms owned by his uncles and aunts, who mostly lived nearby in Kentucky.

But in the end, he writes, he found that “building new molecules was even more fun than building houses.”