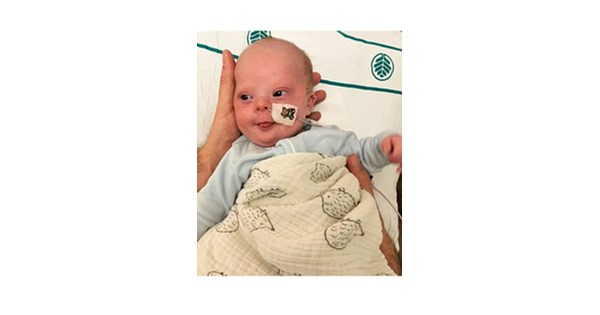 Sam was diagnosed with Down syndrome and a congenital heart defect early in his mother’s pregnancy. He first needed a lot of breathing support when his lungs finished developing, but he quickly defied all presumed labels with his incredible tenacity and composure in the face of medical adversity. Sam also showed tireless patience with his devoted parents, who immediately fell in love with his big blue eyes, buttoned nose, dimpled chin and, perhaps most distinctly, his resisting Mohawk hairstyle. to any attempt at smoothing.

Sam was a favorite of the doctors, nurses and therapists circulating around the NICU. He was an easy baby in every way. Sam rarely cried, and when he did, he stopped as soon as his problem (usually a dropped pacifier) ​​was solved. He loved being swaddled and was largely content to be snuggled and cradled. Sam’s grandmothers and their friends made sure Sam had a deep wardrobe, and the nurses who cared for Sam said they liked picking out the outfits he would wear for their shifts.

A celebration of Sam’s life will be held in the sanctuary of the Covenant Presbyterian Church, 1000 East Morehead St., Charlotte, NC 28204 on Saturday, March 5 at 1 p.m. A live streaming option will also be available on the church’s website, www.covenantpresby.org/live. A private burial will precede the service, and the family will receive guests after the service.

In lieu of flowers, the family is asking for donations to the Down Syndrome Association of Greater Charlotte, 3900 Park Rd., Ste. C, Charlotte, NC 28209 or at https://dsagreatercharlotte.org and at The Children’s Heart Foundation, 5 Revere Dr., Northbrook, IL 0062 or at www.childrensheartfoundation.org.

Yes and no | Editorials