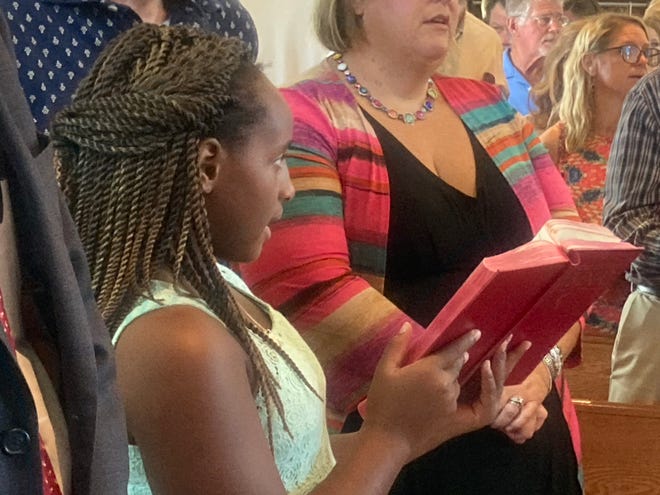 ISLAND GROVE – Betty June Dippel’s family moved to a farm near New Berlin in 1940 when she was just 10 years old.

The first family she met at nearby Island Grove United Methodist Church were the Winklers, who had two sons, including Charles, two years her senior.

Betty and Charles attended the same one-room school in the area. Charles graduated from high school in 1945, joined the Merchant Navy, and returned to central Illinois in 1947.

On slippery ground:How a century-old underground mine continues to cause uncertainty and grief

Two years later, Betty and Charles were married in Hodgenville, Kentucky, but they would call New Berlin their home for the next 68 years as a couple.

Today, four generations of the Winkler family attend Island Grove UMC, which celebrated its bicentennial Sunday with a busy morning service followed by an alfresco lunch.

It is one of the oldest churches in the area, although two other United Methodist churches in the Great Rivers Conference of Illinois—Murrayville UMC (1820) and Centenary UMC in Jacksonville (1821)—predate it.

Church members even had a birthday cake to mark the celebration.

“We had Sunday school all over the church (then),” recalls 92-year-old Betty Winkler. “We tried to respond to everything we were asked to do. The church is there to help the community.”

Veteran journalist Taylor Pensoneau, chairman of the church board and lay speaker, said tracing the history of Island Grove UMC, which sits about 13 miles outside of Springfield on Old Jacksonville Road, is is like riding a roller coaster.

“There were ups and downs, mostly ups,” he said. “The bicentenary is happening while we are on a roll. Attendance is back (after the COVID-19 pandemic), and more and more people are coming.

“It’s remarkable (because) unfortunately you see so many rural churches barely hanging or even closed.”

Average Sunday attendance is about 40, Pensoneau said, double the number five or six years ago.

Marcia Summer makes the hour and 45 minute drive from Washington, Illinois once or twice a month.

“I love this little church, honestly,” Summer said before the service. “The ministers do a good job. And the music. I like it. If I lived here, I would be here in this church (as a member).”

“I have visions of Reverend Peter Cartwright riding his horse through tall grass (as part of the circuit),” Holland said.

Cartwright, a former political enemy of Abraham Lincoln, actually ministered to the church as a traveling preacher.

The church’s official start date of 1822 is tied to the founding of the Island Grove Society. Afterwards, religious services and classes were held in homes or other public buildings.

By 1849 the church was large enough to financially support a full-time minister. In the early 1860s, construction of the current sanctuary began. A parish hall was added later.

Guest speaker James Cornelius, the former curator of the Lincoln Collection at the Presidential Abraham Lincoln Library and Museum, said Lincoln knew and corresponded with one of Island Grove UMC’s founders, James N. Brown, who was best known for organizing the first state fair in Illinois. in Springfield.

Cornelius noted the surroundings of Island Grove UMC in its early days, “those trees, the crops, the cattle, these reflected Lincoln’s origin.

“Those are our origins,” he said. “It was his people.”