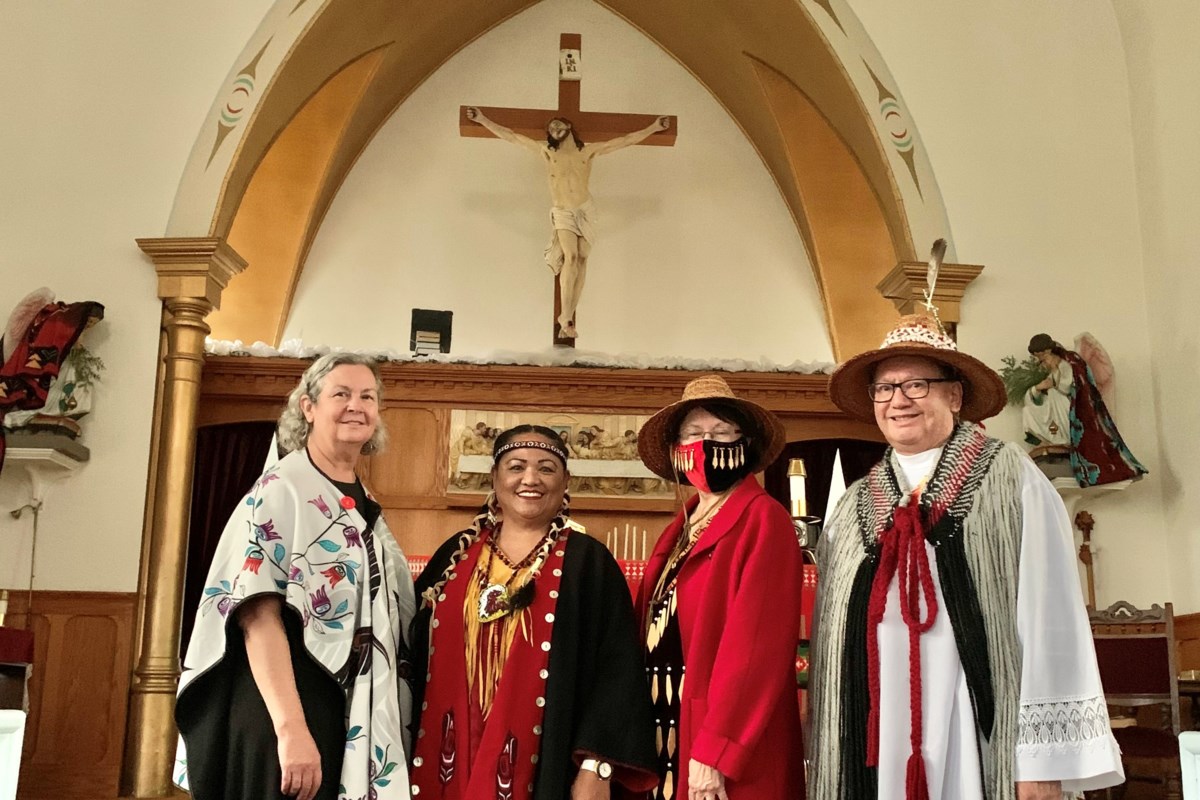 In an effort to decolonize the church, Catholic deacon Rennie Nahanee holds masses at Sá¸µwxÌ±wÃº7mesh SnÃ­chim

Led by Elder Squamish and Catholic Deacon Rennie Nahanee, the church holds Sunday masses in the Squamish language, with the goal of decolonizing the space and bringing back to church those who may be denied the right to vote in the religious institution.

The Squamish Nation Catholic Parish of Eslha7an (mission reserve) on the north shore of Burrard Inlet was erected in 1868. It is the oldest Catholic missionary church in the Lower Mainland and a historic site designated national.

Nahanee believes that the church can be a vehicle for cultural revitalization and continuing education in the Squamish language and teachings.

â€œI believe that learning our language, culture, customs and dance can be done here, as a way to preserve and save all of these things. Because it’s a forever institute, the church.

Nahanee began incorporating the Squamish language into her services during a funeral at the Chief Joe Mathias Center, presenting the Lord’s Prayer in Sá¸µwxÌ±wÃº7mesh SnÃ­chim.

He remembers feeling the immediate connection with those present; however, he is aware that some might not understand what he is “trying to do” by incorporating the Squamish language into his services.

â€œSome of them are still angry with the residential schools. They are having a fight that started with our parents or our grandparents, so some of that anger is passed on. “

But Nahanee wants people to remember that it was their ancestors who were part of the original church community.

â€œI’m not sure they realize it, but they were working here,â€ he said. â€œWhen I was in elementary school, this is what I saw: elders in our community working in the church, about 10 of them doing different jobs. Uncle Louie always greeted peopleâ€¦ with a big smile, nice big warm hands.

Nahanee is aware, however, that the trauma and violence the residential school system has inflicted on Indigenous communities makes many question the role the Catholic Church can play in healing.

â€œI see things on Facebookâ€¦ someone asks, ‘Why would an Aboriginal person work in a church that has destroyed their culture?’ And I say, because I learned from my elders here, from our community, and I respect them, and [I want to] continue the work they started.

Nahanee has looked both internationally, in places like India, and more locally around Metro Vancouver, where Catholic churches have incorporated traditional languages â€‹â€‹and cultures.

“People who have [mass] celebrated in their own culture and language, I think it becomes more alive that way, â€he said.

Inside St. Paul’s, traditional Catholic adornments are slowly being replaced by a heavier presence of Squamish within its walls. The fleur-de-lis that originally covered the architraves has now been replaced by repeating Coast Salish eyes, and the angels that hang above the altar are now adorned with blankets.

Traditional Squamish songs and dances are also included, with Nahanee explaining how The song of the journey welcomes parishioners to Mass while recognizing those who â€œare no longer with usâ€.

â€œWe salute the people who are here and we thank, in a way, those who came before us for giving us back our culture.â€

These moments of integration are also a way for Nahanee to bring her Squamish Catholic mentors back to the space and the services she creates.

Part of decolonizing the church, Nahanee said, is changing the stories that are typically told within Mass.

Recognizing that Catholic teachings often speak of lambs and pigs, and other animals that are not native to Squamish territory, he said traditional stories based on geographic location make more sense.

â€œThe great example is the good wolf and the bad wolf.

â€œA grandfather tells his grandson about two wolves who fight within themselves forever. The grandson asked, â€œGrandfather, who wins? The good wolf or the bad wolf? And the grandfather says, ‘The one you feed,’ â€he said. â€œThat says a lot about the good and the bad in that little story over there. And it’s something that we can relate to, because we know wolves, we have songs about wolves, we have dances about wolves.

Introducing the Squamish language to the masses has also been a personal journey for Nahanee, as he learns the language himself while trying to introduce it into the church.

Working with Aaron Williams and other Squamish language teachers, Nahanee and his wife come to the Joe Mathias Center every Wednesday to learn songs on the drums and the language.

â€œI want to do more than just toss a word here and there. It’s a challenge for me, because I’ve never really spoken the language before, but I’ve always wanted to learn, â€he said, adding with a laugh:â€œ Now that I’ve brought it to the world. church, I am under pressure to learn it.

Charlie Carey is the Indigenous and Civic Affairs reporter for the North Shore News. This rhythm of reporting is made possible by the Local Journalism Initiative

The windows of the civil war