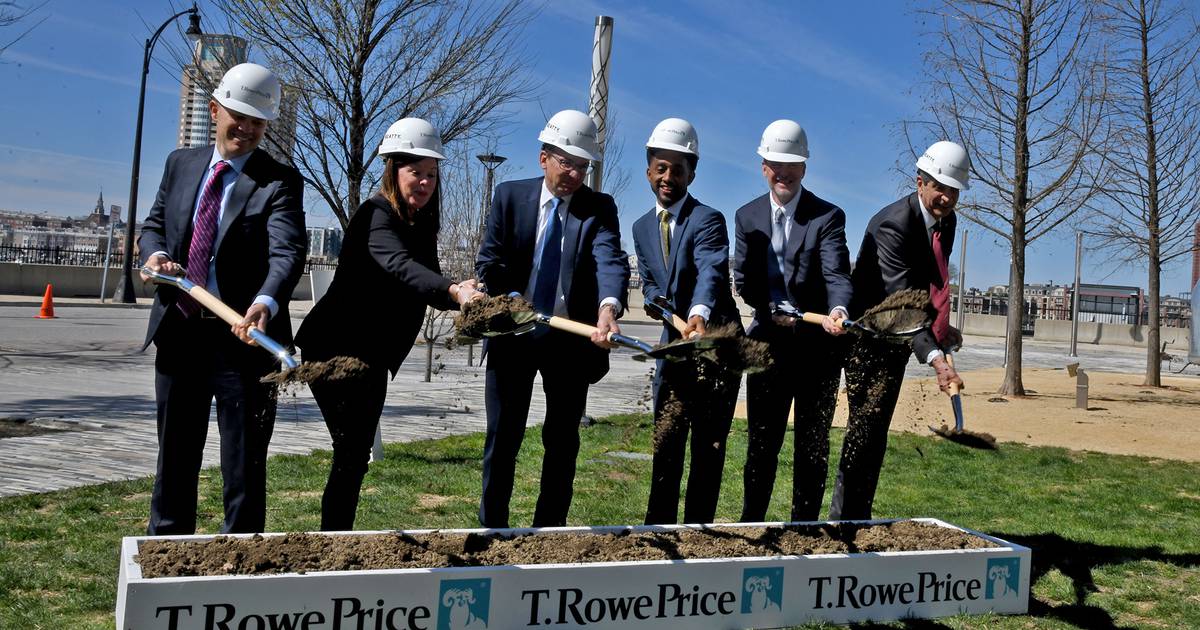 The T. Rowe Price Group held a ribbon-cutting ceremony Tuesday morning at the site of its future 550,000-square-foot headquarters in Harbor Point, where two seven-story buildings connected by a glass atrium are scheduled to open in 2024.

The Baltimore-based global investment group has had a presence in the city since Thomas Rowe Price Jr. started his business on Light Street in 1937 and has been headquartered at 100 East Pratt Street since 1975, occupying nearly half of the 28-storey building. The company, which also has a corporate campus in Owings Mills, flirted with leaving the city in 2013.

“Words truly cannot do justice to our gratitude to Baltimore that T. Rowe Price has decided to reaffirm his deep commitment to our great city,” Baltimore Mayor Brandon Scott told dozens of attendees at the Tuesday ceremony. “Today, with this inauguration, we declare that we are in this together and that their commitment advances our vision for the rebirth of Baltimore and that this can only be done in true partnership.”

T. Rowe Price had about 1,700 employees working in the Pratt Street building when the move was announced in 2020.

Amy Beall, who leads T. Rowe’s real estate and labor services, said the new headquarters will have a timeless style, featuring stone and wood. Lots of glass will allow for views of the inner harbor and let in the natural night, Beall said, noting the company was excited about the move.

“The decision to move to Harbor Point was based not only on a commitment to the City of Baltimore,” Sharps said, “but also on the welfare of our associates, the ability to custom design buildings to meet our needs, and the opportunity to be in this beautiful place, which we believe will help us attract and retain top talent.”

Get your evening news delivered to your email inbox. Get all the best news and sports from baltimoresun.com.

Located on the site of a former chrome factory between Harbor East and Fells Point, Harbor Point is a 27-acre waterfront campus that has been in development for about a decade.

The new headquarters is being developed by the Beatty Development Group in partnership with Armada Hoffler Properties, who are also the general contractor for the project.

Beatty Development CEO Michael Beatty said he tried – and failed – repeatedly to convince T. Rowe to move its headquarters to Harbor Point, at one point sending a model of the proposed headquarters in a gift box to T. Rowe executives.

In December 2020, T. Rowe signed a 15-year lease and development agreement with Beatty Development. Terms of the deal were not disclosed at the time and the total cost to build the headquarters is unclear.

The new headquarters is part of the third phase of development at Harbor Point, which also includes a hotel, apartment building and commercial space on an adjoining plot as well as the 4.5 acre park. Together, these developments represent a capital investment of nearly $500 million, Beatty said Tuesday. When this phase is completed, another plot still remains to be developed at Harbor Point.

Harbor Point was the last undeveloped segment along the Inner Harbor in 2013 when the city approved $125 million in what is called tax increment financing or TIF bonds.

TIF bonds are meant to help ambitious developments get off the ground, usually by covering the costs of improving infrastructure. Additional property taxes generated under a TIF are used to pay down the debt. So far, the Harbor Point project has used approximately $86 million of this bond financing, according to bond disclosure documents.

Hope and peace are needed in Ukraine; here’s how locals help, and you too