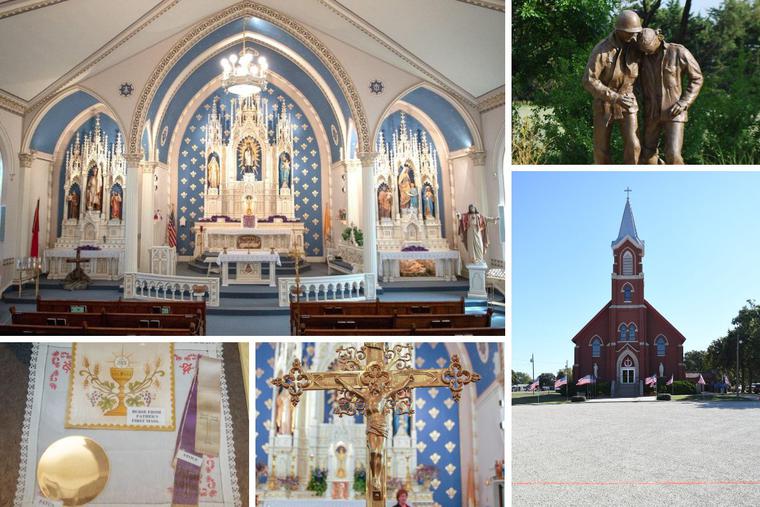 On September 25, 2021, St. John Nepomucene Church in Pilsen, Kansas welcomed home his natal son, Father Emil Kapaun, who died as a martyr on May 23, 1951, in Chinese Prison Camp No. 5 in South Korea. North. His remains were not identified until March 2021. Now he had returned briefly to the town and church he grew up in. He is buried in the Cathedral of the Immaculate Conception in Wichita.

Born on Maundy Thursday in 1916, he was baptized soon after in the new St. John Nepomucene Church, which had opened a year earlier. He made his first confession, his first communion and his confirmation in this parish. He was the first son of St. John Nepomucene to be ordained a priest. He celebrated his first mass here and was then assigned to this church as a new assistant priest and later administrator. Now at home, the faithful come to pay homage to him.

Although St. John Nepomucene has changed on the inside over the years, there are still many things Father Kapaun would recognize, including some of the clothing he once wore that is now on display in the Father Kapaun Museum located in the original parsonage where he lived until he became a military chaplain during World War II. The many visitors from all over the country who come to this church-museum to get to know Father Kapaun or pray for the intercession of the Servant of God have a tangible link with this heroic chaplain whose cause for canonization officially opened in 2008. .

The main altar of the church is the same on which Father Kapaun celebrated mass on several occasions. Beneath the centered tabernacle, a delightful interpretation of the Last Supper carved in high relief appears in beautifully colored detail. The altar and the altarpiece are in carved wood. While in Father Kapaun’s time the wood was left natural, during the 2001-2002 renovations it was painted white, bringing out the beauty of the intricate carvings of the altarpiece up to the top of its triples gothic towers. These towers, with their filigree spiers, are set at angles that emphasize the overall Gothic design. Abundant gold gilding enhances the beauty of the altarpiece by highlighting the abundance of filigrees and crosses.

The large central tower of the altarpiece includes a vaulted and canopied sanctuary which houses a statue of Saint John Nepomucene. The bohemian saint is depicted depicted with a finger to his lips. The pose speaks of the patronage of this saint: he is the patron saint of confessors. As confessor to the Queen of Bohemia, he would not break the seal of confession when the king demanded to know what she was saying. For his silence, the holy priest was thrown into the river Moldau (Vltava) and drowned.

On each side of the statue of this saint, slightly smaller shrines in their lace towers honor, on the right, our Blessed Mother, represented crowned as Mary Victorious, and on the left, Saint Agnes of Bohemia, represented wearing the habit of ‘a Poor Clare; the crown at her feet shows that she renounced her royal position for Our Lord.

Born in Prague to the King of Bohemia, she is promised to marry King Henry III of England. She asked the pope to intervene because she wanted to be consecrated to Christ. Henry consented to her decision. She founded a monastery in Poor Clare and Saint Clare personally wrote to her several times. Related to Saint Elizabeth of Hungary, Agnes is one of the patron saints of Bohemia.

The blue painted gothic arched walls and ceiling of the apse suggest the great love for our Blessed Mother in this church community. The wall behind the altarpiece was also filled in during the last renovation with a motif of golden fleur-de-lis. And in the ceiling of the apse now appears a mural of the Holy Spirit hovering over the altar and the sacrifice that takes place there.

On either side of the sanctuary, the shrines resemble the high altar, with their filigree ornamental triple spiers, but on a slightly smaller scale. To the right, the main spire shrine honors a loving Saint Anne with her child Mary appearing in a large statue. Next to it are statues of Saint Joseph and the Immaculate Heart. A large colorful statue of the Sacred Heart, depicted with arms outstretched in welcome, appears in front of this sanctuary.

Something very rare appears under the Altar of St. Anne – a rendering of Christ’s tomb with an almost life-size statue of Jesus resting in the tomb – a favorite place of contemplation for visits, explained Harriet Bina, director of the Museum of Father Kapaun.

On the other side of the sanctuary, the corresponding side sanctuary features an image of Saint Wenceslas. In the slightly smaller shrines beside it, there is a fine statue of Jesus as the Good Shepherd, holding a lamb on his shoulders, and another of Saint Anthony. Wenceslaus is not only the good Christmas carol king, but was a king of Bohemia in the 10th century. He is the patron saint of Bohemians and the Czech Republic. Fittingly, his feast day is September 28, a day falling in time when Father Kapaun was at his parish on September 25, 2021, and the days following when he was brought to Wichita for his official funeral on September 29.

St. Wenceslas was the name of the church when the first edifice was built in 1888. This frame building built by the first Bohemians to arrive here was replaced by a second edifice, then a third – named the Church of St. John Nepomucene. Opened on September 18, 1915, today’s beautiful neo-Gothic brick church was ready to welcome parishioners who came to farm these plains of Kansas. The farm of Father Kapaun’s parents, Enos and Elizabeth (Bessie), was only 5 kilometers away.

The bohemian heritage is also reflected on the facade of the church: statues honor the two brothers Sts. Cyril and Methodius, called the “Apostles of the Slavs”.

Indeed, some of the first stained glass windows that worshipers see upon entering the church show “the parishioners’ strong religious ties to their home countries,” Bina said. Among them appears Saint Wenceslas and his grandmother, Saint Ludmila, represented teaching him the faith; Cyril and Methodius bringing Christianity to the Slav people; and the baptism of Ludmila’s husband, Borivoj, the first prince of Bohemia to become a Christian.

The many stained glass windows, which also include biblical scenes such as the Nativity and the Resurrection, were made at the turn of the 20th century by the Munich Studio in Chicago, whose founder had studied in Germany. With ornaments and realistic facial expressions for the characters, the windows look very similar to the classic German windows favored at that time.

As the new parish priest in 1953, Mgr. Arthur Tonne was worried about window weather – literally, given that the area is prone to tornadoes. But over the years, any tornado “went over the church,” Bina said, attributing the help to “Father Kapaun [who was] a very good baseball player.

Much of what has been removed over the years has been retained and reused during renovations. For example, the doors of the original communion rail carved with images of the Sacred Heart and the Immaculate Heart became the front and back of the new freestanding altar made in 2001 to match the rest of the church. While years ago the original communion rail was removed, another somewhat shorter but now spanning the sanctuary has been restored.

The original Stations of the Cross, beautifully carved reliefs framed in exceptional carved Gothic frames that echo the triple spiers and lacework design of the altarpiece, have been repainted.

At the rear of the nave, near the seventh station, is a memorial to Father Kapaun – whom the men in the prison camp considered another Christ for his selfless help and encouragement. It includes a photo of him in his chaplain’s uniform, some paintings and two crucifixes. The museum of the old presbytery presents many personal effects and artefacts of this saint in the making.

Among them are the paten and the purse which he used during his first mass and his paten used during his funeral mass in Pilsen. (His official funeral was held later, in Wichita, 72 miles away.) Several fine garments on display include a chasuble and a cope he wore. Bina pointed out that her mother Bessie did the beautiful crochet work all around the edges of her surplice.

Among the exhibits are religious objects and statues from the Kapaun household, photographs of him and his family, the trunk of his grandparents when they emigrated to America which contained porcelain used in Eugene’s wedding and photos that Emil sent to his mother from Japan with representations. of the Sacred Heart made in Japanese, and another of the Holy Family made in Chinese. Near these display cases is the portable folding kneeler confessional that Father Kapaun used in church to hear the confessions of schoolchildren.

Another room contains personal effects donated by his brother Eugene and his wife Helen. Among them are the footlocker Father Kapaun left for Japan (he went to Korea with only a gym bag) and two closets full of items that were returned to his parents two years after his death. As Bina said, “The locker finally arrived on Good Friday.”

Also on display is Chaplain Kapaun’s Medal of Honor, which was awarded posthumously in 2013. Bina said he gave one of the men in the prison camp his little gold pyx and told him, “Take this to my bishop and tell him that I am dead. a happy death.

While he was among the 1,500 men who died in Prison Camp No. 5, Bina pointed out that the fewest number died among the very many men with whom Father Kapaun was able to pray, inspire, heal their wounds and filled with hope. It is a noble legacy for one of the residents of Pilsen and St. John Nepomucene.

Father Kapaun, pray for us!