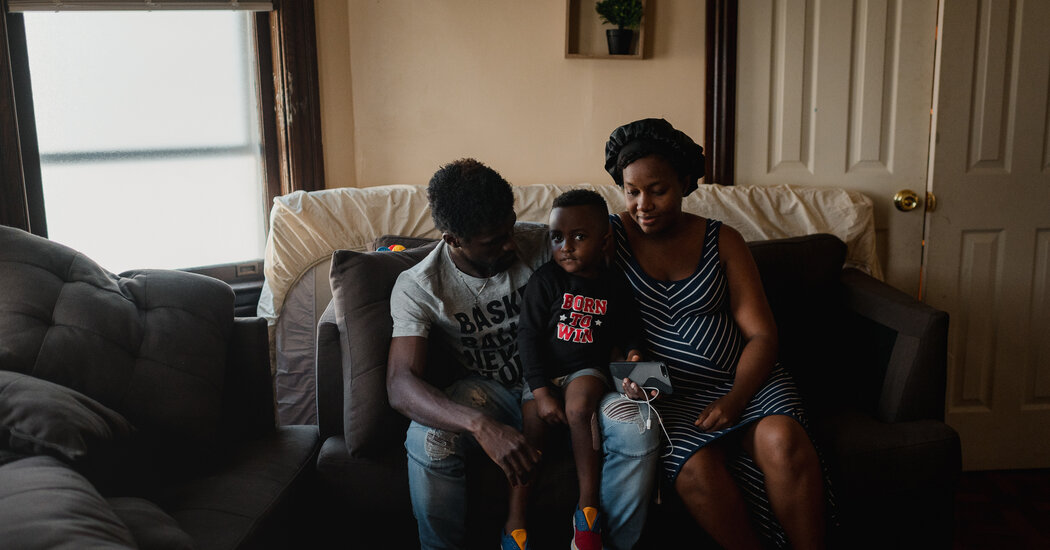 Thousands of Haitians are allowed to enter the United States, but what happens next?

HAMILTON TOWNSHIP, NJ – In early May, Rooldy Alexandre, a Haitian-American pastor, answered a late night call from a Creole speaking man who identified himself as Josue Alexis and said he had followed the sermons from M. Alexandre online. â€œPastor, I just crossed the border with my pregnant wife and young child,â€ the man said. ” Can you help ? “

They needed someone to receive them in the United States.

â€œAs a pastor, I am used to calls from people in need. It was the first time I had received a call from the border, â€said Alexandre, 53. “I just had to act.” He agreed to buy them plane tickets.

The Beersheba Adventist Church in Philadelphia now supports nine Haitians who have crossed the southwest border in recent months, including Mr. Alexis and his family. They live in a three-story shingled house about 20 miles away in New Jersey, with their rent, food and supplies paid for by 120 Haitian worshipers who pool their money until families become self-sufficient. .

Mr. Alexis, his family and friends are part of an influx of Haitian migrants that peaked this month when 14,000 migrants crossed the Rio Grande to the small Texas town of Del Rio, where they camped under a bridge in misery.

The chaos, which led to bipartisan outrage in Washington, prompted the Biden administration to start sending up to 4,000 newly arrived Haitians on deportation flights to Haiti – a country most migrants had left years ago to work in South America.

Thousands more – mostly families with young children or vulnerable pregnant women – were allowed to stay, often because they could, like Mr. Alexis, produce evidence from a friend or relative who could help gain a foothold.

The high-profile crush of Haitians this month underscores the continuing difficulty of deterring mass migration to the southwest border, even with an arsenal of measures designed to slow the arrival of migrants during a pandemic. It also shows how the first generations of immigrants continue to pave the way for others to come later, following a pattern as old as the nation itself.

Mr. Alexis, 25, had crossed the Arizona border with his wife and 3-year-old son months before the Texas border rush.

Switching between fluent French and Spanish, Mr Alexis said it took over a year and all of his family’s savings to reach the United States from Chile, where they lived. Covid-related border closures had stranded them for months in countries like Panama along their 4,700-mile journey over land.

They had no illusions that they would ever build a stable life in Haiti, which has been plagued by political upheaval, economic dysfunction, civil unrest, gang violence and natural disasters in recent years.

“To return to Haiti is to commit suicide,” said Mr. Alexis. â€œI was ready to take this arduous path to achieve something tomorrow. “

Before emigrating, Mr. Alexis had played for a professional football team in Port-au-Prince. As a teenager, he went to Minneapolis to represent Haiti in a youth championship.

In 2015, two of her older sisters had emigrated, one to Brazil and the other to Chile. After arriving in Santiago in 2016, he found a job in a chemistry lab and, next door, played football for a semi-professional team. The following year, he married a fellow Haitian, Antoinette Peroux, who worked as a cashier in a Burger King. Antonio was born in 2018.

In 2020, the couple paid close attention to Democratic presidential candidate Joseph R. Biden Jr. He had promised to restore the possibility of asylum for those persecuted in their own country and to be more benevolent towards immigrants than the incumbent he was running against, Donald J. Trump.

â€œI decided that Chile was a first stop,â€ said Mr. Alexis. â€œTo really move forward, we had to reach the United States. “

He and his wife raised around $ 5,000 and began the journey to North America, on foot and by bus, sometimes paying smugglers to guide them along remote and perilous trails. At one point, they ran out of food and clean water. Ms. Peroux continued to breastfeed Antonio to save him from river water which could be contaminated.

When Mr Biden was elected, the family celebrated at a refugee camp in Panama, where they waited for Costa Rica to ease border restrictions linked to Covid.

It was there that they befriended Julien Cheridor, 53, a Haitian accountant who had also decided to leave Chile. He told Mr. Alexis about a pastor in Pennsylvania he had known in his youth, and Mr. Alexis began to listen to his sermons.

By the time they reached Mexico in early 2021, Mr. Alexis learned that migrants who reached San Luis RÃ­o Colorado, a town on the border of Sonora state, were successfully entering Arizona. From near the southern Mexican border, they took a 19-hour bus to Mexico City, then boarded another bus for 34 hours to San Luis RÃ­o Colorado.

They crossed May 6 into Arizona, where they and other migrants were quickly apprehended and loaded into a border patrol van that transported them to a station for treatment.

From there, they were transported by bus to a facility in Phoenix, where they were tested for Covid-19 and were asked to contact relatives to book tickets for their destination. Mr. Alexis tried to reach an uncle in Boston; he did not answer.

Fearing to run out of time, he thought of M. Alexandre.

After purchasing their plane tickets, the pastor called an emergency church board meeting to discuss next steps.

Riquet Brutus, a church elder who had served as a prosecutor in Haiti before fleeing the brutal government of former President FranÃ§ois Duvalier, found a home near Trenton, NJ, a half hour from Philadelphia that could accommodate Mr. Alexis’ family in a room – at the expense of the church.

The council activated the church’s community service group, which normally supports homeless shelters, to collect money, food, toiletries and clothing for the family.

On May 10, Antonio’s third birthday, the family moved into a large room on the first floor of the large house. Twelve days later, they had an extraordinary stroke of luck: the Biden administration announced it was extending temporary protected status to Haitians who arrived in the United States on or before May 21, allowing them to live and work. in the country without fear. deportation in recognition of the difficulties that existed in their homeland.

No such protection was available for the thousands of Haitians who flocked to Del Rio in September and were forced to take flights to Haiti.

“It was a gift from God,” said Peroux, whose baby is due next month. They immediately filed requests.

Less than a month after the Alexis family moved into the New Jersey home on June 3, Mr. Alexandre received a text from a migrant hotel in El Paso. â€œYour family has arrived. Please book their tickets, â€he said. He was incredulous.

He called the number and the phone was passed on to Mr. Cheridor, the man who initially told Mr. Alexis about Mr. Alexandre. Mr. Cheridor had just crossed the border and reminded the pastor that they attended the same church in Haiti decades ago. The pastor remembered him.

Besides asking for a plane ticket and accommodation for himself, Mr. Cheridor had another favor to ask. Could the church help a mother and daughter he had met on the way?

The church board agreed to pay $ 1,300 in plane tickets and rent two more rooms, for $ 600 each, in the beige and brown house. Mr. Cheridor has taken the attic. The mother, Louina Sylvain, 33, and her daughter, Louidjana, 12, occupied a room on the second floor.

Then, at the end of July, Mr. Alexis called the pastor again. This time it was her sister, Marie, who had crossed the border with her husband and toddler. She didn’t need help with plane tickets. But could the church let her family stay at home?

Building a solid foundation, he said, can be difficult until people have the capacity to work legally. Mr. Alexandre explained to his faithful that the families of the house will recover as soon as they have obtained their work permit.

â€œThe church is doing all it can to support our compatriots,â€ he said. â€œIn an emergency, we ask church members to give more than they usually give. This is what happened in this case.

To keep his soccer skills strong, Mr. Alexis plays every night except Saturdays when he goes to church. He traveled occasionally to play in a semi-professional league in New York City, earning $ 200 for a few games. Mr. Cheridon did janitorial work to earn money.

But they realize that they are a burden on the congregation.

â€œSince coming, the church has had to help us with absolutely everything,â€ Alexis said as his son raced on top of a toy Batmobile.

â€œI can’t wait to fend for myself, without depending on others,â€ he said. â€œThere are other people coming who are going to need the pastor’s help.

In the footsteps of Saint Paul through Greece