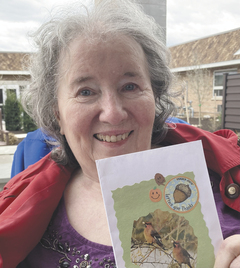 Born February 6, 1937, to Gladys (Wagner) Hartman and Frederick T. Hartman of Mifflinburg, Pennsylvania, Wanda was the second of four daughters in a strong, loving Christian home. A 1955 graduate of Mifflinburg High School, Wanda served as co-editor of the school yearbook and the school’s first May Queen. She studied Elementary Education at Lock Haven State Teachers College before taking jobs teaching third and fourth graders in the York, PA and Irwin, PA school districts.

As a young teacher at York Suburban Elementary, Wanda was introduced to the love of her life, Barry Meads Einsig, by Barry’s cousin, a fellow teacher. They married in 1962. They shared a love of nature, and in the early years Wanda and Barry spent almost every weekend exploring the eastern forests. Every Monday morning, Wanda’s students could expect to find a little treasure on her desk—a beautifully colored acorn, wildflower, or leaf—from her latest excursion.

Wanda and Barry settled in Baltimore, where they raised their two beloved children, Elizabeth and Jonathan, until Barry’s untimely death at age 41 in 1978.

As a young widow returning to central Pennsylvania in 1982, Wanda focused on her children, but also found time for her church and community. Over the next three decades, she served on the missions committee and prayer team of Lewisburg First Presbyterian Church, sang alto in the church choir, and served as a deacon. Community service took her to the Union County Public Library, where her friendly demeanor became well known at the front desk.

In 2013, Wanda moved to an assisted living facility in Elmcroft and then Riverwoods. At both locations, she was quick to show off her bright smile and enjoy her interactions with the staff. She loved all activities related to music, art, animals, bingo and resident life.

Wanda lived an extraordinary life of love and gentleness. She sought to share God’s love with everyone she met through her unfailing kindness in all of her relationships, and she truly never had a bad word for anyone. She quietly served others in often hidden roles such as power of attorney for two widowed aunts, tutor to an adult cousin with Down’s syndrome and, along with her sisters, carer for their aging mother with Alzheimer’s disease. . Additionally, as a deacon in the church, Wanda cared for many people in the Lewisburg community.

Wanda’s favorite Bible verse was Galatians 6:2, “Help one another to share one another’s burdens, and so obey the law of Christ.” Wanda had her own burdens to bear, but her life of joyful service embodied that spirit of kindness and connection.

Wanda is survived by her daughter, Elizabeth Einsig Wise, and her “favorite son-in-law”, Ed Wise, both of New Orleans, LA; his son, Jonathan Barry Einsig, of Glorieta, NM; his sisters, Julia Bilger (Bob), Brenda Ilgen (Harvey) and Erma Reigle (Roger), all of Mifflinburg, PA; as well as fourteen nieces and nephews and their families. She is also survived by a brother-in-law, John Einsig (Bev), as well as nieces and nephews from Barry’s side of the family.

A funeral service will be held at 12:30 p.m. on Wednesday, June 1 at Forest Hill Cemetery. Visitors will be received from 11:00 a.m. to noon in the sanctuary of Forest Hill New Life Church. After the service, a light lunch will be served at the Mazeppa Union Church, 3200 Johnson Mill Road. Memorial donations may be made in loving memory of Wanda to First Presbyterian Church, Lewisburg, or to Joni & Friends. Arrangements of John H. Shaw III Funeral Home, Lewisburg.

Sacramento officials to vote on repeal of anti-cruise ordinance