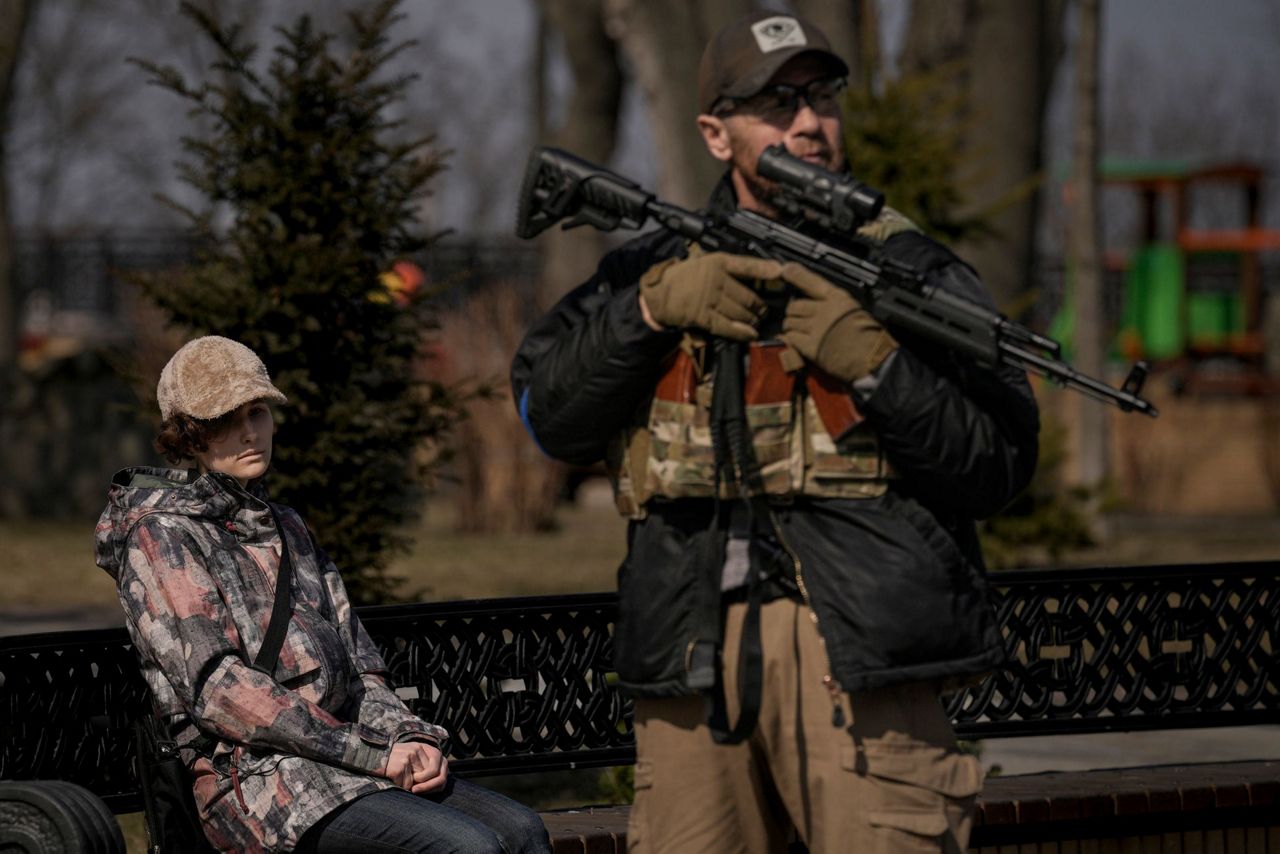 What you need to know about the conflict

Almost a month has passed since the largest ground invasion in Europe since World War II, and there have been no major breakthroughs on the battlefield or at the negotiating table.

Russian forces appeared to be bogged down outside key towns in the face of fierce Ukrainian resistance. Strikes on cities continued to wreak havoc across the country.

Kyiv, the Ukrainian capital, was rocked by Russian bombardment which sparked fires in high-rise buildings on Wednesday, injuring four people.

On the outskirts of kyiv, artillery fire thundered as Ukrainian forces fought tooth and nail to contain the Russian invasion.

Here are some key things to know about the conflict:

WHAT IS HAPPENING IN AND AROUND THE CAPITAL?

The capital of kyiv is still under fire. A barrage of shelling rocked the city on Wednesday, with rockets hitting a shopping mall and high-rise buildings in the Sviatoshynskyi and Shevchenkivskyi neighborhoods.

The destruction was extensive and fires caused by the shelling injured four residents, city officials said.

From a public park in Kyiv, Mayor Vitali Klitschko said Russian shelling had so far killed 264 civilians in the capital, including four children. As he spoke to reporters, explosions and gunfire rang out across the city.

Russian forces shelled the ancient city of Chernihiv in northern Ukraine, the governor said on Wednesday, destroying a bridge that had been essential for evacuations and aid deliveries. Chernihiv residents have no clean water or gas for cooking and heating, city officials said.

On the western outskirts of the capital, Ukrainian troops attempted to return fire to stalled Russian forces. Ukrainian forces managed to retake the suburban town of Makariv on Tuesday, enabling them to reclaim a key highway and prevent Russian troops from encircling kyiv from the northwest.

Ukrainian forces also recaptured areas northwest and northeast of the city, including most of Irpin, said the mayor of kyiv, a city that has suffered some of the heaviest shelling in the world. war.

Some 460 settlements in the ringed outskirts of Kyiv have been cut off from the power grid, local officials said.

WHAT IS THE STATUS OF THE CITIES ATTACKED?

Russian and Ukrainian forces continued to fight fiercely on Wednesday for control of the eastern Ukrainian town of Izium, the president’s office said.

Russian warships are increasingly hammering the port city of Mariupol from the sea, Western officials believe. Control of Mariupol would give Russia a coveted land corridor to Crimea, which Moscow annexed eight years ago.

The United States calculated that Russia had lost more than 10% of its original combat capability, including troops, tanks and other materiel. The Pentagon says Ukrainian forces have begun to go on the offensive in parts of the country, such as the southern city of Kherson which was captured earlier in the war.

Britain’s Ministry of Defense on Wednesday described the battle lines as largely “static”, with Russian forces trying to reorganize before resuming a full-scale assault.

WHAT HAPPENS IN MARIUPOL?

Mariupol, a strategic port city on the Sea of ​​Azov, has become a living symbol of the savage destruction of war.

According to the Ukrainian president, some 100,000 people remain trapped inside the city, struggling to survive without heat, food or drinking water and subjected to relentless Russian bombardment from sea and sky.

Ukrainian President Volodymyr Zelenskyy said 7,000 people managed to escape in the latest evacuation on Tuesday. He also accused the Russians of seizing a humanitarian convoy trying to deliver desperately needed food and other supplies to the city, and capturing the drivers.

Russian missiles crashed into civilian buildings, including a school and theater known to house hundreds of people underground.

In the words of UN Secretary General Antonio Guterres, it is a “living hell”.

In the eyes of Viktoria Totsen, 39, who arrived in a Polish border town on Tuesday after fleeing the city, she is “99% destroyed”.

WHAT DID THE AP DIRECTLY WITNESS OR CONFIRM?

More than 3.5 million people have fled the war in Ukraine, according to the UN refugee agency.

Ukrainians who escaped pitched battles spoke to The Associated Press in the western Ukrainian city of Lviv, where thousands were arriving and thousands more were leaving to join a mass exodus to the Poland and other countries.

Julia Krytskaa held back tears at the Lviv train station as she described what she fled to Mariupol.

“There’s no one you can ask for help,” she said.

In the Ukrainian seaside city of Odessa, affectionately known as the Pearl of the Black Sea, street musicians played under cloudless skies as people fled.

So far, Odessa has been spared Russia’s worst assaults, but a major attack on Ukraine’s biggest port city seems inevitable. The anxiety grows. The streets are filled with sandbags and barricades. Tearful families said goodbye to loved ones at the train station.

“I can’t understand what happened,” Igor Topsi, a musician, told the AP.

Meanwhile in Lviv, a Ukrainian craze for arms buying and training was evident on Wednesday.

“Everything is a bestseller these days,” said Zakhar Sluzhalyy, an armory owner who has seen his stock dwindle rapidly since the war began.

Many Ukrainians have given up their daily jobs to join the fight against the world superpower. Sluzhalyy said his new clients are taking up arms to defend themselves.

“The war is on our territory. We are defending our land,” he said.

HOW DOES THE WORLD RESPOND TO WAR?

President Biden traveled to Brussels on Wednesday for talks with key allies, an effort to try to stop the war’s descent into an even greater catastrophe.

Leaving Washington, he described the possibility that Russia could use chemical weapons in Ukraine as a “real threat”. This is an issue that world leaders will discuss at the NATO summit, he added.

Biden is expected to roll out new sanctions against Russia and coordinate more military assistance to Ukraine. He is also working on long-term efforts to bolster defenses in Eastern Europe and wean the continent off Russian oil and gas, the White House said. He will travel to Poland later in the week.

From the Vatican, Pope Francis again prayed for peace in Ukraine. He added a personal note this time to explain his aversion to conflict, citing his grandfather, a World War I veteran, who taught him to hate war in all its forms.

International investigations into possible war crimes and other violations committed during the war are ongoing. The Swiss attorney general’s office said it had begun collecting evidence from Ukrainian refugees in a bid to expose potential crimes and sanctions violations stemming from the conflict.

On Wednesday, the United Nations will face three resolutions on Ukraine’s spiraling humanitarian situation, each hinting at bitter political divisions within the world body. A resolution backed by Ukraine and the West holds Russia responsible for the humanitarian crisis. A Russian Security Council resolution on the war makes no mention of its invasion.

Polish security services said they were seeking to expel 45 Russian secret service agents and their associates who previously enjoyed diplomatic status in the country.

Russian ally Belarus, for its part, said it was expelling Ukrainian diplomats and closing a consulate.

On the final leg of his world tour via videoconference, Zelenskyy gave an emotional speech to Japan’s parliament. He implored lawmakers to help Ukraine defend itself and impose more sanctions on Russia.

“Our people cannot even adequately bury their murdered relatives, friends and neighbors,” he said.

Copyright 2022 The Associated Press. All rights reserved. This material may not be published, broadcast, rewritten or redistributed without permission.