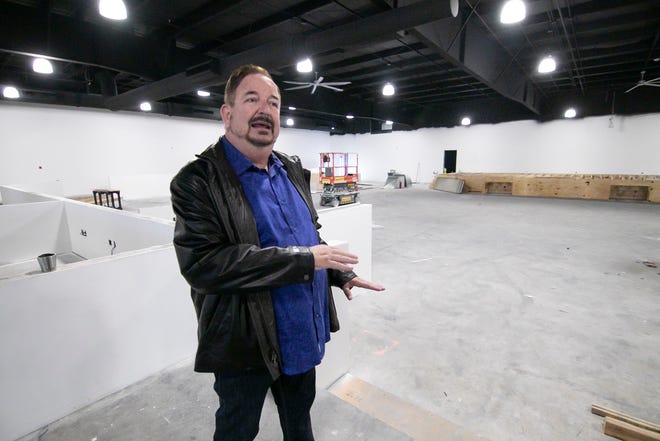 TWP HARTLAND. –The lanes, shoe rental, bar and grill are gone from the former Striking Lanes bowling alley at 1535 N. Old US 23, which closed last year after a local church purchased it.

FloodGate Church is currently working to complete the renovations, which include a large sanctuary, stage and youth halls, in time to hold their first Sunday service in the new location in mid-December.

The church has also purchased land around the old bowling alley, which includes working baseball diamonds and a former miniature golf course. Church officials say possible additional plans for the roughly 45-acre site could include creating a community park with an amphitheater, trails and other features, and baseball leagues could potentially return with four diamonds.

Pastor Bill Bolin said the church purchased the building and property for about $2.2 million and renovations are expected to cost about $2.5 million. He said the church raised more than $1 million through donations and sold its current location at 1623 S. Old US 23 near Brighton to Alive Family Church, which is currently located in Oceola Township. near Howell.

Bolin said the congregation outgrew his current church in Brighton Township because attendance at services jumped from hundreds to thousands during the COVID-19 pandemic.

“We chose to stay open for a number of reasons,” Bolin said. “We didn’t close a single Sunday.”

He said FloodGate Church was among religious institutions in Michigan opposing state-issued emergency mandates banning people from gathering in public, including in church, during the early days of the pandemic.

In May 2020, Governor Gretchen Whitmer revised an executive order to allow people to gather for public religious worship after some churches filed a lawsuit.

Bolin said 125 to 150 people attended FloodGate Church before the pandemic.

He said church growth “has calmed down” as some people chose to return to other churches they had attended, but it is still on the rise.

He said more than 1,100 people attend church services on average and another 400 watch online.

The new church will be able to accommodate more than 1,500 people.

He said the church had faced backlash in the media and on social media for remaining open for in-person services all the time, but attendance had increased.

“The first reason (to stay open) was, biblically, that we are commanded to come together,” he said. “The church has always been there to serve people in their worst times, and when they die. So our first mandate to stay open was the Bible and our responsibility as Christians.”

He said he also kept the church open to exercise the First Amendment’s religious freedom protections.

“Also, to show young people that there are things worth fighting for, the possibility of going to jail, maybe dying,” he said.

Church member Connie Johnson said she originally intended to join the church temporarily after a church she had attended suspended in-person services.

“They didn’t close the doors during COVID,” Johnson said. “There’s been a ripple in the community, good and bad, and it’s led to exponential growth as a result.”

An old bowling alley gets a makeover

Much of the building’s renovation is complete, but there’s still a lot to do before services begin on December 18.

The contractors created an approximately 10,000 square foot sanctuary where the bowling alleys were located.

Johnson is thrilled that the church is hosting concerts and events in the sanctuary, which will include a 42-foot stage, backstage with a “green room” area and an audio-video booth.

“We host speakers, concerts, ministry events,” she said. “We will have chairs instead of benches, so the space will still be a flexible space for community events.”

She is also proud that the church has a special room for people who have medical conditions, or who have sensory issues or disabilities. It will feature a window overlooking the sanctuary, as well as a streaming video monitor and a separate exterior entrance.

“We had medically fragile people, even before COVID, and those people need to be protected. Now those people will be able to come to church,” she said.

The church will also feature a coffee area stocked with Good Sense coffee from the Brighton-based company.

The church has youth program rooms divided by age group, including rooms for young children with one-way windows, so parents can see them without disturbing their activities. They are also repurposing a kitchen and some equipment from the old bar and grill for church use and have added administrative offices.

AFTER:A former teacher hears the call to “Reach Higher”. Here’s how she’s been helping children and adults for 25 years

Bolin said future plans could include redeveloping land with a park and an amphitheater and adding a gymnasium to the church, depending on the church’s ability to raise more funds.

“We don’t know exactly how it will play out,” he said. “We are prepared to sell up to 20 of the 45 acres, but if we retain ownership and find financing, we will turn the ball diamonds and additional vacant lots into parkland.”

He said baseball leagues that used diamonds in the past might be able to come back.

A former miniature golf course, closed for over a decade, was badly damaged by vandalism during this time. Small buildings that were part of the route had smashed windows, shattered walls, graffiti, broken glass and other debris. The course is covered in graffiti. The church is considering options for the site.

Johnson said turning the property into a park would benefit the entire community and park amenities could be used by the general public.

She said the church should establish a long-term maintenance plan “so it’s an asset to the community and not a liability”.